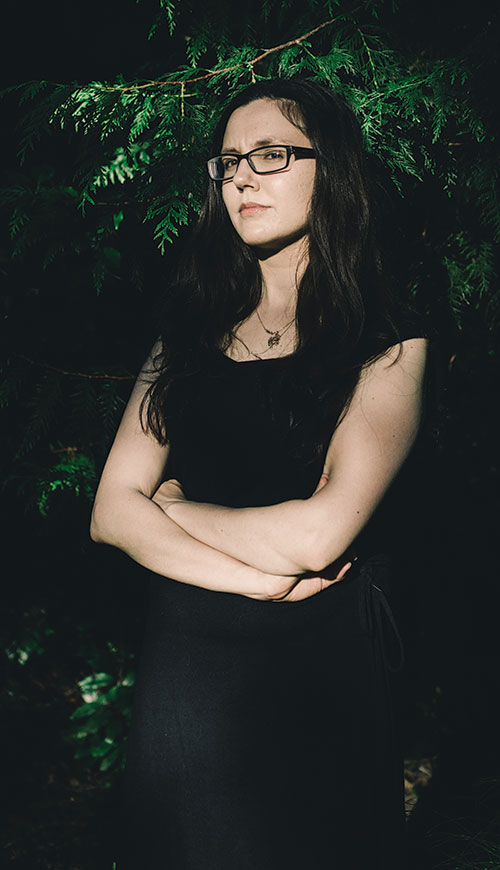 You know what I need in my life?” Elissa Washuta and I are talking about hunting. She’s never been but wants to go, and I’m warning her that my experience entailed a lot of waiting around for hours in a tree stand, making weird sounds with my mouth and ineffectually rubbing antlers together. “I need waiting for hours. It’s like the opposite of what I’ve been doing for years.”

She exhibits the classic symptoms of a prof with a mountain of papers to grade. It’s the end of the academic year, but Washuta, a lecturer in the University of Washington’s department of American Indian Studies, isn’t letting the workload get to her. She seems relaxed, and is herself a relaxing presence.

She’s quick with an anecdote and often relieves tension with jokes. She sums up her time in a New Jersey Catholic school, for instance, by recounting one of the main lessons from her teacher, Sister Agnes: “Please Jesus. Chiquita is better than Dole, but Dole is better than Clinton. Please Jesus.” But she also knows when to let a tension hold, hum in the air and dissolve on its own accord: “[The church] was filled with nice people who told us to love each other,” she says of her relationship with the Polish-Catholic church, “to take care of each other, in broken English.”

That Washuta maintains an easygoing, joyful demeanor is miraculous considering the years of hardship that drove her to write her memoir at the age of 29; My Body Is a Book of Rules is due out this month from Red Hen Press. Over the course of the last decade, Washuta has suffered rape, accusations of overstating her Native American identity, and diagnoses of bipolar disorder and eating disorders. On top of that, she’s had to field the endless questions that accompany those afflictions: “But was it really rape? How much Indian are you, really? Did you get a proper diagnosis? You don’t look like you have an eating disorder.”

The book serves as a solid response to those questions. It’s also an innovative piece of nonfiction that combines formal experimentation with gut-punching prose. “Washuta’s sincerity kept me turning pages,” says Nicelle Davis, a poet at Red Hen Press and one of the editorial consultants for the book. “The book affirms there are no rules; there is only a brave attempt to claim our bodies and our lives as our own.”

The key word in Davis’s take is attempt. Essays are, as the word’s French origin indicates, tries; attempts to use prose to show what a mind looks like when faced with questions of the self. Washuta’s use of a wide range of prosaic forms and the facility with which she employs them stand out among other memoirs.

Over the course of My Body Is a Book of Rules, Washuta weaves together primary and imagined documents, autobiography, essays, research and pop culture forms like TV scripts in order to tell her story. Imagined doctor’s notes give way to autobiographical vignettes about her Cascade origins and then to conversations between the Bible’s Commandments and tips about “pleasing your man” from Cosmopolitan magazine. As you progress through the book, each story charges the next with its own network of questions and anxieties. Far from being disjunctive, this organization allows the reader to see the relationships Washuta sees between the genocide of Native peoples, the systematic oppression of womens’ bodies and cultural suspicion about mental illnesses.

Washuta’s one of those writers who’s been at it since childhood. Her first bit of juvenilia was about a girl who teased construction workers. In middle school she started writing song lyrics, which a teacher later told her were poems. She also wrote scripts for TV shows and movies that were all about

herself. “I was the star,” she says, “All my favorite celebrities were in love with me, and we all lived in this house and I had all these boyfriends. That’s how I got started writing. I made hundreds of pages. Then I threw them in a dumpster.”

In college she started to write fiction, well enough to snag the attention of the University of Washington’s MFA program in prose. In her first quarter at UW, she split time between the nonfiction and fiction workshops. She claims the nonfiction course she took with best-selling author David Shields was more alive with possibility and the chance for genuine self-discovery. “I spent my whole life thinking that I didn’t have a story to tell, and so I thought I should spend the rest of my life making shit up,” Washuta says. “I realized in Shields’ class that that wasn’t true.”

One of the major steps in a writer’s life is the moment when she tells not the story she wants to tell but the story she must tell, the story she’s written and revised in her head a million times, the story she’s told to close friends in dark rooms. For Washuta, this moment came in her nonfiction workshop. “I felt like laying bare everything I’d done and everything that had happened to me using very plain language and plain sentence structure,” she says. “It was the opposite of creating a tiny little intricate fictional world. I was putting things on the table and finally exhaling.”

The story she had to tell—“Faster Than Your Heart Can Beat”—is one of the books’ most powerful. It’s a reverse-chronological listing of her sex partners up until the moment she wrote it. The list begins with her rape by an acquaintance at the University of Maryland when Washuta was 20. As a rhetorical device, the reverse-chronology allows Washuta to show how rape and sexual assault haunt the patterns of love and loss in her life. Each entry reads like a Dear John letter: brutal, intimate, variously celebrating the body and seeing the skeleton beneath the skin.

Another issue she tackles—in life and in the book—is the notion of blood quantum, the idea that anyone in the United States is 1/4 Cherokee or 1/16 Navajo. Because she doesn’t look phenotypically Native, and since she received a scholarship to the University of Maryland for “checking the Indian box,” as some former classmates put it, she’s had to defend herself on that front, too. To parse one’s heritage into fractions of blood, Washuta explains, is to employ a dead metaphor used to talk about livestock breeding and dogs. “It’s a genocidal policy because the blood quantum can’t go up—it can only get smaller and smaller until we are ineligible for government programs and ineligible to enroll in our tribes.”

This concept of a blood quantum was introduced in the 1700s, but was systematized in the U.S. in the 1930s to determine who was “Native enough” for federal programs. The policy disregards traditional kinship systems and thus steamrolls indigenous values. “Traditionally, kinship systems were individualized according to the particular culture,” Washuta says. “They’re complicated—not as simple as arithmetic. Tribes adopted people from other communities. There was intermarriage and capture. Now we’re not allowed to adopt members anymore except for ceremonially, like with Johnny Depp. But maybe it’s for the best that he can’t be Indian? I did like Deadman, though, have you seen that?”

I haven’t, but I love the way she asked. That kind of quirky associative leap from a heavy subject matter to a lighter one is indicative of Washuta’s attitude about the histories of oppression she’s inherited, and of the way she fuses pop culture and crafty creative nonfiction to reenergize those histories for a new generation of readers obsessed with social media, tabloids and selfies.

At UW, Washuta teaches about the power of representation, about its ability to damage but also to repair. This spring quarter she taught a class on the images of Natives Americans in cinema. Films like Stagecoach, Broken Arrow and Thunderheart are excellent, she admits, but they portray Native peoples in problematic ways. Films like Sherman Alexie’s Smoke Signals, and other movies that don’t focus primarily on Native identity, such as Andrew MacLean’s On the Ice, better illustrate the range of Native experience.

“At the end of the quarter my students say they will never again look at a movie the same way. They’ll never say ‘Indian burn.’ But, honestly, I know I’m not a completely effective teacher. All I could do this quarter was show [my students] the way all the threads are tangled. I couldn’t untangle everything for them.”

No one untangled anything for her either. On re-reading her own book recently, Washuta says she’s still flummoxed about the struggles going on in the narrator’s head. “I could write forever and never untangle it all.” But just because she can’t write forever doesn’t mean she isn’t going to try. The working title for her next effort is Starvation Mode, wherein she’ll explore personal and communal inherited trauma.

Washuta is her own harshest interrogator. It’s uncomfortable watching someone pick at a knot that took 10 years to develop, and then to realize that it’s going to take generations and many more books to process all the seemingly disparate but totally connected stuff—but My Body Is a Book of Rules is a necessary and beautiful start.

Richard Hugo House hosts a book launch party for My Body Is a Book of Rules on Aug. 14 at  7 p.m., featuring a reading by Washuta as well as a Q&A and book signing.