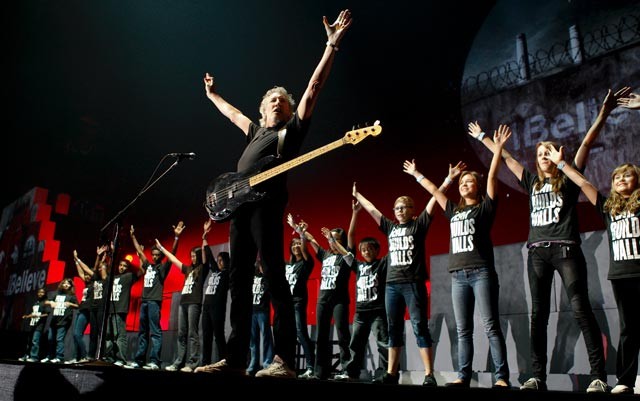 Roger Waters’ rock opera The Wall was famously inspired by his own contempt for Pink Floyd’s audience and his horror at what that contempt could make him do. On the last date of a 1977 Pink Floyd tour, Waters was so irritated at being harangued by a fan in the audience he spat directly in the man’s face. The stage set of the initial Wall (first performed live 1980) seemed to indicate a desire to get as far from the audience as possible, with a wall erected during the show’s first half, completely concealing the band from view for most of Act II.

So it was a little odd to see Waters in a more friendly rock star mode when his Wall tour arrived in Seattle on May 24, taking the stage with his arms held aloft like a champion, grinning broadly, and, after a few numbers, even making the standard rock show announcement “Good evening, Seattle!” — the cue, as always on hearing the hometown name, for the audience to cheer.

The “miserable, fucked up” Roger (as Waters’ described his younger self during the show) might well have made a derisive comment or two about that scenario. But 30-some years on, Water is far more congenial, even arranging to have local children appear on stage to sing the chorus of “Another Brick In the Wall Part 2,” and urging the audience to give “a round of applause for these kids of yours.”

But he’s also given a lot of thought as to how to present The Wall for a contemporary audience, reinventing the work in the process. Though it’s now regarded as a classic, the album wasn’t universally well received on its release; Rolling Stone called it “unremittingly dismal and acidulous,” while Britain’s New Musical Express denounced it as “self-centered pessimism — hopelessly clichéd” (none of which hurt the record’s sales; it easily topped the charts). The new production stresses the anti-war, and anti-oppression themes of the work: during the opening, military-clad personnel held up a dummy “everyman” while the “I am Spartacus!” sequence from the Kirk Douglas film was played over the audio system, and during intermission, the wall was filled with shots of men and women killed in wars past and present.

The wall in the show is no longer the blank slate it was in the original production; films are projected on it throughout the performance. Perhaps it was felt today’s audiences need more constant stimulation. In a way, it’s too bad The Wall is presented as a rock concert and not as a theatrical production. Audiences are reverently quiet during Laurie Anderson’s large-scale shows, which also make use of backdrops and projected film; at The Wall, audiences cheered at the explosions and the appearance of giant puppets, but were restive during moments of less action. When Waters first spoke to the crowd, introducing a new number, “The Ballad of Jean Charles de Menezes,” a man killed by the London Metropolitan police after he was mistakenly identified as being involved in 2005 London bombings, some in the crowd cared little about hearing who Menezes was, one calling out “Whatever!,” others shouting out the title of the next song, “Mother.” And how can a sequence showing a TV screen getting smashed be as potent when the audience is fiddling around with their iPhones in order to snap a picture of it? (anticipating this, a pre-concert announcement asked that people turn off the flash on their cameras, a request that was ignored). As the crowd continued to treat the performance as if it was a ball game — going out for beer, busily texting — it was clear they’d come for the spectacle, but weren’t necessarily as interested in the underlying message.

Certainly that message — the demands of life leading to a withdrawal behind a “wall” of one’s own choosing — is as relevant today as ever. It’s a point driven home in the new production, with its images of corporate logos raining down, tormenting authority figures rising overhead, fascist rallies urging miscreants to be thrown “up against the wall.” Certainly there’s more reason than ever to want to be “Comfortably Numb,” as the song puts it, at least until the wall comes crashing down at the show’s end. In one of the show’s most beguiling moments, Waters, normally a bassist, took up an acoustic guitar to play “Mother,” duetting with his own image performing the same song from the concerts of 31 years ago projected on the screen behind him. It was a good summation of the show itself, which draws on the past but has its eyes fixed firmly on the future.