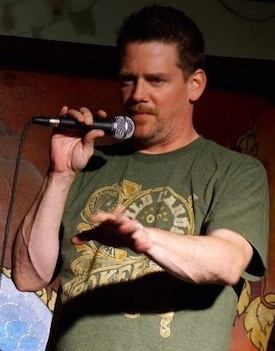 A comedy open mic can be a traumatic experience, fraught with more pathos than an Arthur Miller play. If you’re not accustomed to seeing people fail publicly and resoundingly, watching a couple dozen Willie Lomans mount the stage to peddle their thoughts in the back bar of a Thai restaurant to an audience that is variously drunk, hostile or inattentive can be agonizing.

But if your skin is thick enough to absorb the awkwardness of watching someone visibly recalibrate their dreams under a bright light in front of a crowd of strangers, then you will find flashes of brilliance and inspiration at an open mic: the newcomer getting his endorphin-bell rung with that first big laugh, the chatty crowd suddenly going silent and craning their heads to hear a punchline, the veteran comic unfurling five new minutes of bankable material that he thought up on the drive over.

These are the moments that make an open mic worth sitting through.

Punch Pod distills the open mic experience to those moments. Recorded in the back bar of Jai Thai on Broadway every Tuesday and Friday by show producer/comic Rick Taylor, the comedy podcast culls a handful of choice minutes out of the two-hour cavalcade of broken dreams. Taylor, a 20-year radio veteran, has created perhaps the best-ever-recorded archive of any weekly open mic, and Punch Pod offers select snippets from that archive. The weekly podcast is usually less than 10 minutes long, and Taylor chooses material based strictly on audience reaction on that particular week, without regard to the experience level of the performer. This gives the listener a well-produced and random snapshot of the modern id, a sort of audio twitter stream from inside the zeitgeist.

Check out the Punch Pod podcast here. The open mic at Jai Thai on Broadway is every Tuesday and every other Friday. Sign-ups start at 8:30 p.m., show starts at 9 p.m.