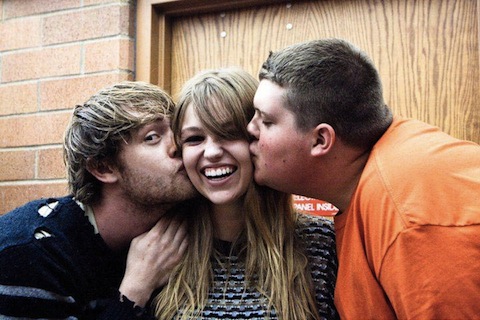 After sell-out screenings as the opening night film at the Seattle International Film Festival’s Renton venue, the Renton IKEA Performing Arts Center, and the Egyptian Theatre in Seattle, an additional screening of Fat Kid Rules the World has been set up for Thursday, May 25, at SIFF Cinema Uptown (there’s also a screening May 28 at the Everett Performing Arts Center).

Even considering that the wildly cheering audience at the Egyptian screening had a sizeable contingent of folks who worked on the film (when actor-turned-director Matthew Lillard invited cast and crew members to join him on stage, over 35 people clambered up), it’s easy to see why Fat Kid is such a charmer. It’s a smart, funny film about teens that hits all the right notes, avoids the cop-out tactic of going for cheap laughs or gross-out humor (well, mostly; there a vomit scene you might wish to avert your eyes from), and pulls off the tricky feat of being sweet but not sentimental.

Jacob Wysocki shines as the troubled “Fat Kid” Troy, too trapped in his own misery to make any connection with the world around him, save for through his constant video gaming. And then Marcus (Matt O’Leary) literally tumbles into his life and things begin to change. Marcus has his own troubles, but also has the boundless energy (and appearance) of an eager puppy dog, and slowly but surely starts pulling Troy into the world around him. Rounding out the trio is Troy’s dad (only referred to as “Mr. Billings,” played by Billy Campbell), an ex-marine who runs his household with military precision, but also has an unexpected soft spot.

At the risk of sounding too heavy handed, you could view the core cast members in psychological terms, with Troy as the ego, Mr. Billings as the super ego, and Marcus, of course, as the id. A person is psychologically healthy when all these elements are in balance, and you can certainly see that dynamic at work in Fat Kid. For Troy, the liberating factor is punk rock, when Marcus, a guitarist, urges him to become the drummer in his new band (with the film’s music provided by Pearl Jam’s Mike McCready and local producer Barrett Jones; O’Leary also contributed some lyrics to a song). It’s a joy to watch as Troy rediscovers his self-esteem and sense of self-worth, though it’s not a journey without its stumbles; Marcus’ problems in particular threaten to derail every accomplishment.

Seattle and the suburbs provide the film’s locations, but this isn’t a “Seattle movie”; no self-conscious references to the Space Needle. It’s a film set in Seattle, with engaging characters you can relate to because of, not despite, their flaws. Expect this to be a contender for the “Best of SIFF” screenings that follow the end of the main festival.