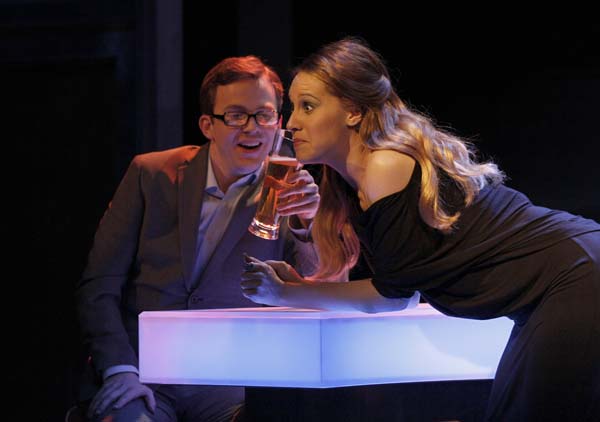 First impressions, First Date suggests, can be misleading. Sometimes—but usually those initial assessments turn out to be right. So it is for this world premiere musical playing at ACT’s Falls Theatre, ACT’s latest co-production with the Fifth Avenue. Its take on the perils of dating in the modern world bubbles and froths but reveals little depth underneath, built on narrative and compositional clichés.

The revue-format show launches from the stages of a blind date between a man and a woman in a trendy urban restaurant. Aaron (Eric Ankrim) is a fish-out-of-water in this slick establishment, an awkward schlemiel in glasses who works in finance and is on the rebound. His set-up, Casey (Kelly Karbacz) is self-reliant and cynical, carrying a few chips on her shoulder but wanting to give dating a chance. As the evening grinds on, all of the influences outside of the room—best friends, old flames, judging relatives—invade their thoughts with tuneful kibitzing.

Ankrim, fresh from a much-lauded lead performance in Oklahoma!, displays physical comic deftness as his Aaron falters and missteps through his graceless yet endearing attempts to impress. Karbacz presents a formidably independent Casey, yet her revealed fear of loneliness softens her edges. Librettist Austin Winsberg takes this pair through the universal anxieties and hiccups of the date, which threatens to crash multiple times as the ensemble interrupts to warn against bringing up politics, religion or previous romances. As the pair stumble from drinks to a meal, they learn more of each other’s histories and hearts.

The awkward romantic joust satisfies expectations—and, it must be noted, the audience was roundly entertained. That included my teen companion for whom the subject is nearer than this geezer long off the market. Yet the show never presses any buttons we don’t expect it to press, and has nothing new to say.

The exuberant number “The Girl for You,” which riffs on Casey’s admission that she is not Jewish, is a good example. The scolding family voices (including the talented Billie Wildrick) that close in on Aaron’s psyche—complete with Hasidic brimmed hats and payot—might have been fresh in 1965, but who but the most traditional would call that a mixed marriage anymore? The song “The World Wide Web is Forever” brings the new digital reality to the table, as the pair furiously seek each other’s secrets through Google, Facebook, YouTube and Twitter. But this, too, feels like a ham-handed and obligatory attempt at relevance that offers no real insights into modern romance. Opportunities to reflect the moment are even missed, as when Brandon O’Neill and Benjamin Harris portray the edgy, rotten guys Casey has a weakness for in “That’s Why You Love Me.” But Aaron works for Wall Street—these days, what’s more bad-boy than that?

Notably, Winsberg has made his career writing for television, notable for Jake in Progress and the rich mean girl fantasy Gossip Girl. That’s what he has given us here—television, drawing on the easy tropes of situation comedy. So too have composers/lyricists Michael Weiner and Alan Zachary produced high-energy tunes that follow predictable forms. Other than the Harrison’s recurrent rocking of “Bail Out Call” (offering Casey a prearranged chance for a quick exit), the tunes are forgettable.