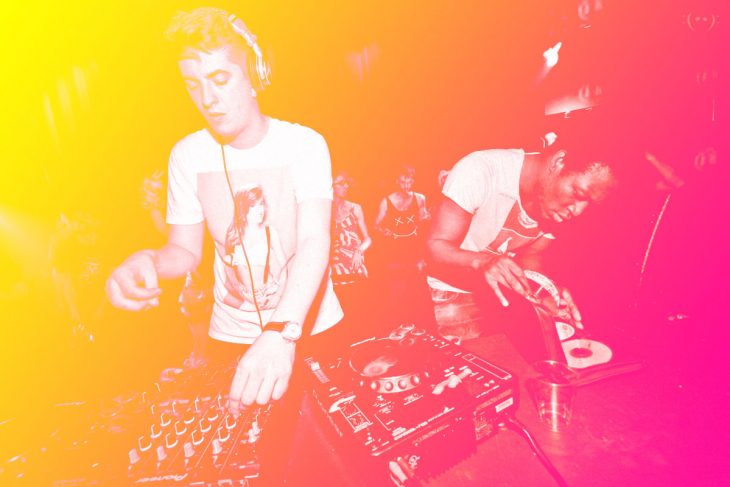 “Something wicked this way comes!”

The last thing I expected MC Sgt Pokes to do in introducing UK dubstep pioneers Skream & Benga to the stage at Neumos last night was quote Macbeth. With dreadlocks half his body length flailing about his head, he tore into his mic in a deep, weathered London shout that sounded like someone shoveling gravel, adding “Laaarrrvely!” at the end for good measure. But in terms of the sounds that pounded our eardrums for the next two hours, the ringmaster’s proclamation of “wicked” was right.

For the uninitiated, Skream and Benga’s audio product, dubstep, is the musical movement that has swept the USA in the last two years like no other electronic music genre before. Stadia across the country, replete with leaping teenagers and 20-somethings, are testament to dubstep’s skyrocketing popularity. And it sounds positively nasty. It sounds like nothing else before it. It’s the perfect, equal and opposite reaction to anaemic, bland, beardy, indie dad-folk. It’s sounds raw, energetic, experimental, exciting, violent. It’s very, very foolish indeed. I love it.

The sonic assault emanating from the two CDJs and a mixer upon which Skream and Benga tag-teamed throughout their set was like a sea monster with severe indigestion from eating an alien spaceship. It was 14 chainsaws of varying speeds slicing through a police siren while Super Mario collects coins. It was helicopter blades missing your earlobe by inches, a demon shark chomping through entire cities, a happy dinosaur playing jump-rope. It was sin.

No surprise that dubstep has its detractors. I’ve been amazed since arriving on these shores nearly two years ago at how much hate the art form (yes, art form) attracts. Back in the UK it enjoys a healthy amount of credible mainstream success fueled by a wide spectrum of producers and the proud knowledge that the genre was invented there. In New Zealand, where I lived before moving here, dubstep is eagerly loved and danced to at large-scale sunny music festivals and the small minority who don’t like it don’t get too hung up about it. In the U.S., however, dubstep is extremely divisive. Maybe we just like to argue more here. Scene leader Skrillex—who has an undercut and writes and finishes all of his music on a laptop—is a punchline. Any remotely testosterone-heavy tune is quickly and often unfairly maligned as “bro-step.” But let’s recognize that most of the mud here is slung by musical bores who forget that hip-hop, house, and rock ‘n’ roll for goodness sake, all had their merits, legitimacy, and stamina doubted and questioned by those who weren’t ready for the next movement. Last night, the club kids knew no such doubts or questions. They were, it must be said, simply having a great time. Which really is the point of the whole thing. All great music is ridiculous.

Clad in a black t-shirt with busy graphics and a plain gray tank top respectively, Skream and Benga ripped through their tunes, each one barely lasting a couple of minutes, no bassline repeated after 16 bars. They were smart to do so; this is a younger generation of dance music lovers that don’t have the patience or the inclination to sit through eight-minute disco edits. Their set wasn’t all dubstep, either. Many DJs previously confined to the genre now play under the umbrella term “bass music,” which means electro-house, drum ‘n’ bass, and low-end-heavy techno all get a look in. It keeps DJ sets from sounding stale. Oliver Jones and Adegbenga Adejumo, as Skream and Benga are known to their mums, did exactly that as they raced through the opening bars of Redlight’s “Source 16,” Ms Dynamite’s “What You Talking About,” Dub Phizix’s “Marka,” Nero’s “Crush on You,” Rusko’s “Somebody to Love,” cutting short all of them with savage rewinds.

It got the crowd hyped. Benga dropped “Night” (his first and arguably the first dubstep tune ever) with its infectious beeping melody that sounds like a miniature penguin gleefully jumping down a large flight of stairs and/or a payphone timing out at the bottom of the sea. Sgt Pokes actually sang along by voicing the beeps, which got one of the biggest audience reactions of the evening. And so did Skream’s encore: his remix of Cassius’ “I Love U So,” a perfect end-of-night track. So did Benga’s last tune: the ever-reliable, perpetually-inflammatory “Killing in the Name” by Rage Against the Machine. And so did Skream when he invited all the girls in the audience onto the stage to dance. So did Artwork (Skream and Benga’s cohort in their dubstep supergroup trio Magnetic Man) when he ran across the stage spraying everyone in the crowd with water, prompting Sgt Pokes to point and bellow “Artwork! The Rehydrator!” And so did every other song they played.

After more than two hours of slouching forward and lurching our bodies to the bass while wagging our fingers in the air (this is how you dance to dubstep), their set ended. The house lights came on and two jubilant, messy south London drawls shouted our unexpected reward: “Seattle you rep the hardest! We’re not just saying this! This has been the best night of the tour!”