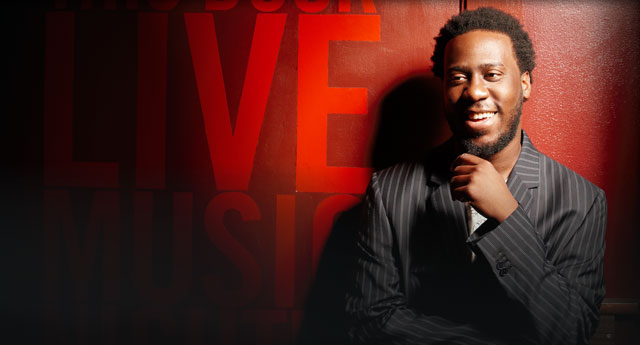 Robert Glasper is one of the world’s most talented jazz pianists.

Last night at Neumos, Glasper balanced a gigantic repository of accumulated technical skill with a wealth of classic and modern jazz, soul, rock, and hip-hop knowledge. His mastery of musical astronomy created constellations where there had once only been lone stars. The orbits of the planets Coltrane, Hancock, Dilla, Yorke, Morello, and Cobain were shifted and new asterisms formed. Sometimes he would beam these new musical morphings onto the planetarium ceiling, as when his band played a few solid minutes of “A Love Supreme.” At other times he would allow us only a fleeting glimpse through the telescope, as when he casually tinkled only four seconds of the intro to “Everything in It’s Right Place.”

With his band—red mohawked soul rooster Casey Benjamin on vocoder, keytar, flute, and saxophone, Derrick Hodge on electric bass, and Mark Colenburg on drums—taking center-stage, Glasper unassumingly sat at his keyboard to the side of the stage, looking impossibly relaxed as if he’d done this over a thousand times before, probably because he has. Dressed in loose-fitting jeans, an eggplant-colored LRG T-shirt, and a black beanie uncommitted to staying atop his head, he introduced his band-mates and made sure everyone in the audience had bought his latest album Black Radio, all with the calm nonchalance of somebody organizing a Saturday morning softball game.

Despite his show running 45 minutes late, Glasper felt not the slightest need to hurry the evening’s proceedings. Benjamin began the band’s set by cooing into his vocoder. This was the only sound the group made for the first three minutes. Slowly, Glasper’s band introduced each of their instruments when they were ready, only building after laying and testing foundations. No mic breaks, no pauses for applause, no introductions. It was free and improvised jazz.

The bass started up. Hip-hop drums shuffled in, only to suddenly drop out, and then suddenly launch into a very complicated solo. A saxophone reliably looped a strong soulful riff, then veered off course to play only one bar of the 45 King’s “The 900 Number” to a quick, delighted cheer from the audience. Glasper played solidly, adding flourishes and embellishments to improvised jazz scales with ease. The vocoder (and laser-ish sweeps and whooshes, also by Benjamin) was an interesting and unorthodox addition to the traditional jazz band sound, but grated a little when the robo-vocals featured too heavily and the music began to sound like a forgettable Daft Punk ballad. Hodge then soloed the much-loved bassline to Digable Planets’ “Rebirth of Slick” (either to the chagrin or amusement of Digable’s frontman Ishmael Butler, spotted in the house earlier) followed by an interpolation of Rage Against the Machine’s “Bombtrack” intro.

Just after midnight, singer Bilal finally joined the Experiment on stage. By now the crowd’s appetite for soulful vocals to complement the purely instrumental sounds of the last three-quarters of an hour had been whetted, and once Bilal began to sing—his golden vocals just managing to match Glasper’s piano in competence—our ears found what they were searching for.

Stealing, wearing and totally pulling off a girl’s red-rimmed specs from the front row, Bilal twirled his face in front of the mic as he began to sing “Levels,” his third single from latest album Airtight’s Revenge. Wearing an unbuttoned, light denim shirt, jeans, and a fedora perched on the back of his head, he gamely bounced along to the beat, holding up one finger at shoulder height like a pogo-ing, modern jazz mystic. This he followed with a cover of Bowie’s “Letter to Hermione,” before Benjamin wove a soothing flute line in between the bass and drum patterns and Glasper deftly added ivory twinkles. The stars aligned.