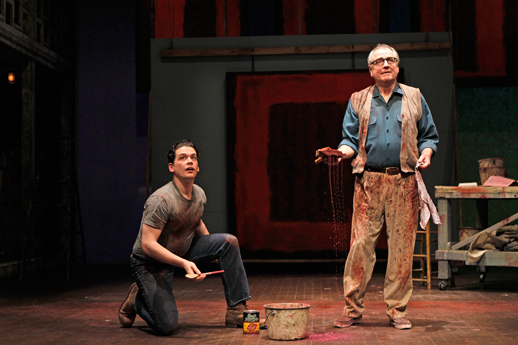 Don’t get caught up in the romantic nuances of the language of Red. The play—about the fictitious relationship that develops between painter Mark Rothko and his young apprentice, Ken—is a minefield of shop-talk on art, artistry and the meaningfulness and purpose imbued in Rothko’s works. But Red goes far deeper than its surface wordplay. It’s an examination of two men at different stages of life, disregarding and disagreeing with one another while struggling to identify themselves and their purpose.

Red is a 90-minute, no-intermission life lesson. There are two actors on stage throughout, and all of the action takes place in one room, Rothko’s studio. There’s the old man and the young assistant, and the two are tasked with Rothko’s biggest commission to date— a $35,000 project to outfit the brand new Four Seasons restaurant in NYC’s Seagram Building. Ken, an aspiring artist, arrives in anticipation of working with one of the greats of his time, but is quickly disillusioned by the enigmatic painter. Rothko spends more time spouting philosophies on artistic integrity and ranting about his contemporaries—Jackson Pollock and Pablo Picasso both take hits—than he does putting paint to canvas.

Ken learns that Rothko is a man at war with his present. While Ken sees an interest in the incoming works of Andy Warhol, Rothko is quick to discredit them. He dismisses the up-and-comers and their era of “fine,” and, in a moment in which we see exactly where his logic will get him/us, asks Ken, “You really think Andy Warhol will be hanging in museums in a hundred years?” Juxtapositions—old versus young, fresh versus aged, action versus reaction, mentor versus protege—develop throughout the play, shaping the narrative and the characters and carrying them all to a surprising end.

After debuting on Broadway in 2010 following a run at London’s Donmar Warehouse, Red racked up an impressive slate of Tonys and Drama Desk Awards, including the Tony for Best Play, and one for Best Featured Actor for Eddie Redmayne (recently seen as another young-man-poised-for-greatness in My Week With Marilyn), who portrayed the earnest Ken to Alfred Molina’s Rothko. In the Rep’s production, local actor Connor Toms takes up the helm as Ken and, in a slightly older framework, delivers a restrained but heartfelt performance. In the end, though, Red really belongs to its Rothko, and Seattle vet Denis Arndt is nothing short of revelatory as the aging, cynical legend, who in 90 short minutes both frustrates and educates us, all while managing to endear himself to us so completely— not unlike he does with his eager protege.

Red extended its run at the Rep by popular demand, through March 24. Tickets are available at SeattleRep.org or by calling 206-443-2222.