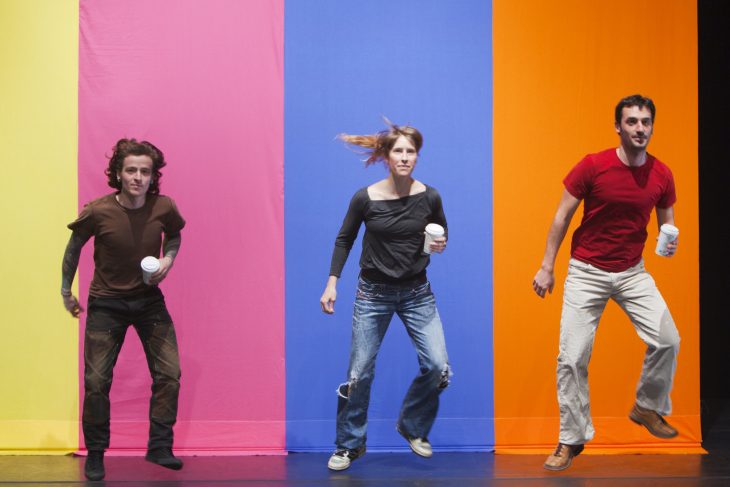 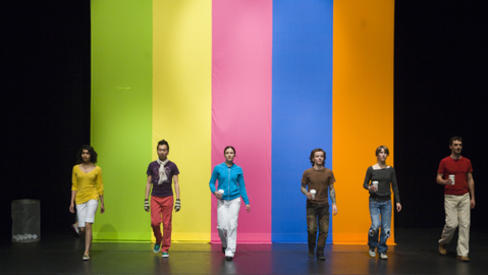 According to choreographer Mark Haim, the past, present and future are all happening at once.

Haim’s X2 opened at On the Boards this past week, an abstract new work simply entitled 1 and a second piece, 2, that was an expanded version of his This Land is Your Land, an entry from the 2010 NW New Works Festival.

The first piece, an interpretative modern work, took place amid a stunning set of suspended tree trunks (by designers LILIENTHAL|ZAMORA) and smart lighting, including two horizontal neon bars at the back of the stage that subtly, slowly rose and fell. Two dancers were already in place when the audience came into the theatre; Hendri Walujo stood completely still between the trunks and Haim sat on a rolling platform that slowly moved across the back of the stage throughout the 45-minute piece—a nod to the always-present passage of time. During various intervals in the dancing, Haim left the platform to run downstage, then back up to the chair—time passing through action, through everyday life. Haim mixed modern dance with pedestrian action (walking, sleeping, sitting in chairs, drinking coffee and chatting), suggesting that everyday engagements are as much a performance as choreographed work. Why are we more fascinated when they happen on stage?

Haim juxtaposed of slow and frantic motion to create tension throughout 1. Dancers burst around the stage in frenetic motion, then slowed to an agonizing pace, once again a  nod to time as a subjective entity, a contrived system. Jody Kuehner and Jim Kent had a beautiful duet halfway through the performance, their slow and controlled movements containing balletic grace. Beth Graczyk’s solo demonstrated the underlying repetitive nature of dance as she repeated classical ballet moves (such as double front kicks) with a building intensity, to the point where she was crying out in frustration. If the definition of insanity is repeating the same thing over and over again but expecting different results, Graczyk’s solo was the perfect accompanying image.

If 1 was abstract and lyrical, 2 highlighted function and form. Strict in form (consisting of marching, line formation and repetition), 2 had a looser, more playful feeling. The soundtrack consisted of a sampling of various country songs by Hank Williams, Billy Ray Cyrus and Martina McBride, among others. The basic movement of the piece consisted of a line of six performers who walked in beat to the front of the stage, then backwards upstage. When they reached their starting point, the person at the left end of the line went behind a rainbow-striped banner and a new dancer emerged at the other end of the line, holding a Starbucks cup. Each time a dancer reached the end of the line, they threw their cup in a trash bin. As the line cycled, dancers came from behind the banner costumed in different arrays—men in dresses and heels, women in sundresses and skirts, one person in a leather biker’s getup—and eventually the entire group came out naked. Although still slightly abstract in nature, 2 is more accessible than 1, but the evening’s skilled combination of work successfully showcased Haim’s wide range of choreography, hinting that while time may be fleeting, this choreographer has the creative chops to stick around for a while.

Above: Dancers in 2. Image by Tim Summers.