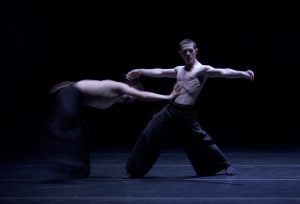 Last weekend Seattle danceophiles migrated east for the 5th Annual CHOP SHOP Bodies of Work Contemporary Dance Festival. Held at the Theatre at Meydenbauer, the first night was full of strong and varied companies, each of the 12 performances with minimal costume and backdrop, leaving the focus completely on the dance.

BodyVox had another video submission opening the second act, this time a comical piece from 2000, with dancer Jamey Hampton in a duet with a bright yellow backhoe. Set in the middle of green field against a bright blue sky, with accompanying classical music, Hampton runs in circles as the shovel appendage of the machine also spins; he caresses the machine, hangs on and lets it drag him along the ground, and performs sailing leaps around the machine. Replacing the usual dainty and graceful female partner in a duet with a hulking piece of machinery is an overtly satirical move—this company doesn’t always take themselves seriously, and you shouldn’t either.

A real treat for dance aficionados was the performance from Spectrum Dance Theatre’s Donald Byrd, homage to his recent time spent in Israel. THE ‘little’ JERUSALEM DANCE was a mix of alternating movement and spoken word. Set to music from Emmanuel Witzthum (bustling background noise similar to that in an airport or crowded subway station) Byrd, in his usual hat and scarf, started with reaching arm movements, as though in exultation, hands up towards the ceiling. He moved slowly up the stage, looking around, up and behind him as though in confusion. At times he ran in circles, or wobbled unsteadily as though his feet were grounded but his body wanted to move. In between these sections, Byrd went to a music stand where he read reflections about Israel, opening with, “Jerusalem is a place of narratives. It is a place where voices battle to be heard.” As the piece continued, Byrd’s movements became sharper and more violent; he hit himself on the hand repeatedly, evoking the image of ancient religious flagellation. The background noise rose in volume, and his anxious movements reflected a seeming anxiety at being, “a stranger in a strange land,” and trying to navigate through that space.

Adam Barruch Dance, Khambatta Dance Company and SANDSTROMMOVEMENT all had modern pieces without a narrative structure, and strong, flexible dancers portrayed emotion with their onstage interactions. Hailing from Brooklyn, NY, Adam Barruch Dance brought Folie à deux, a duet inspired by the French phrase for “a madness shared by two.” Danced by Barruch and Chelsea Bonosky, the dancers explored power, manipulation and the frenetic (and sometimes violent) nature of a passionate relationship. Through beautiful isolation, entwined limbs, and Bonosky’s ability to arch her back in seeming propulsion away from her partner, the two danced fervently, alternating between subtle caresses and sadistic blows. Khambatta’s Centrifugal Force took the imagery of twisting, of moving outward, and laced it throughout the entire work. From the beginning—which starts out with three women on stage, one in the spotlight rotating her entire body around herself, undulating her hips—to the group circle the cyclic theme is constantly present. SANDSTROMMOVEMNT had Ellie Sandstrom and Hannah Crowley in a languid show of limbs and flexibility, performing against a spotlight that doubled, and at times quadrupled their shadows, creating a small army of shadows that were at times more intriguing to watch than the actual dancers.

An absolute standout was Northwest Dance Project’s A Short History of Walking. Dancers Patrick Kilbane and Elijah Labay (both shirtless and muscled in black baggy pants and socks) showed a stunning display of controlled movement, starting from the slightest shift in the torso, carrying the motion up along the limbs, out to the hands and up to the head. Their jumps and kicks were strong, and every movement of the body was hypnotically paced in contrast to the high-powered, techno-esque music from Alva Noto. One section in the middle of the piece was weak—a spotlight in the center of the stage with the two men reaching up and outwards, circling their hips in more stagnant motion, walking up and down the stage. With less full-body movement, it didn’t show off enough of the dancers’ skillful athletic prowess. The overall juxtaposition of strength and grace (expertly pointed toes, turned out limbs) was an unexpected, albeit beautiful surprise.

Other works didn’t stand up as well against strong contenders such as Stone Dance Collective’s high-powered and visually engaging Piñata or MOVE: the company’s parkour-inspired tidbits, but the array of contemporary dance on display was impressive, and although the range of style wasn’t as broad, as say, On the Board’s A.W.A.R.D. Show, both choreographers and performers impressed with their skill.