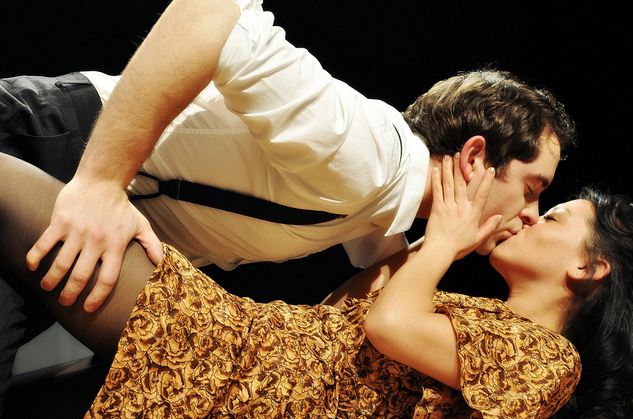 When Spring Awakening debuted in NYC in 2006, it felt like a bit of a gamble. Based on a once-banned play by Frank Wedekind about a group of teens discovering themselves and one another against a backdrop of oppression in 19th century Germany, Spring Awakening was put in the hands of writer/lyricist Steven Sater and musical partner Duncan Sheik (of “Barely Breathing” fame). They transformed the work into a soaring rock musical. The show and its pop soundtrack defied definition, and in doing so became a touchstone of not only that particular Broadway season―picking up eight Tonys in total, including Best Musical―but also of musical theatre itself.

Spring Awakening is a play about growing up, about kids and adults, about first loves, about loss. It’s a sad play, but it’s also a heartwarming play. Spring Awakening‘s effect on the many who’ve seen it since its inception is long-lasting. So, frankly, it’s about freakin’ time that a local production came to fruition. As of last Friday, that first production is in the capable hands of Balagan Theatre for a two week run at their new space at 1524 Harvard Ave.

Both times that I’ve seen Spring Awakening―the first national tour at the Paramount Theatre (2008) and then at Tacoma’s Pantages (2011)―it was dominated by its would-be third wheel, the frail, over-anxious Moritz Stiefel. Moritz has it pretty rough from the star: He’s slight in frame with a father who expects a lot, school teachers who inexplicably don’t like him, and only his pal Melchior Gabor to keep him company. Yet he always manages to be the most lovable character on the stage. As portrayed by local Jerick Hoffer, the “Seattle” Moritz is no exception. Every pained look on Hoffer’s face is heartbreaking, every crack of his voice charming, and Moritz’s journey quickly becomes the most gut-wrenching of the lot. Hoffer, perhaps known locally more for his performances as drag queen Jinkx Monsoon than his dramatic turns at places like Seattle Shakespeare Co., is a star waiting to be born, and Moritz undoubtedly takes him one step closer.

He’s the main attraction here, but he’s in great company. Melchior, the alleged instigator of all things corrupt in the play’s world, is played by Brian Earp, whose local theatre history dates to 2003 and 2004, when he was awarded Best Actor by the 5th Avenue before going on to performances at Yale and Oxford. Wendla Bergmann, a role originated by Glee‘s Lea Michele, finds her equal shares of eager naivete and panic as played by Diana Huey (seen recently in ACT’s A Christmas Carol). The rest of the principle cast takes full advantage of their moments to shine (keep an eye out for Kirsten deLohr Helland as Ilse and SA touring vet Justin Huertas as Hanschen).

The production takes some liberties that may irk loyal Spring Awakening fans―Moritz’s hair never changes shape, the Bill T. Jones’ choreography for “Totally Fucked” is gone, the (spoiler)s of Rock roles are re-imagined and thereby missing much, if not all, of their panache, and “The Bitch of Living” is a little, uhh, humpier than you might recall. But these are little tweaks, allowed when you’re bringing into the community the first local production of a play of this cultural magnitude. As a bonus, Balagan’s new digs lend themselves nicely to the play’s evolution, offering added intimacy without stifling the livelier moments.

If you’re going in as a newbie, you’re best advised to go in blind (spoilers are trouble on this one, so watch your Wikipedia links!). If you’re not, well… don’t spoil all the songs by singing too loudly.

Spring Awakening continues January 12-15 (with a likely return in April!). Due to adult content, audience members must be 14+. Visit balagantheatre.org for tickets.