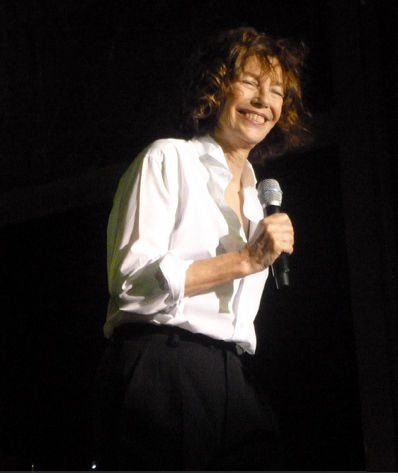 Tuesday night at the Neptune Theatre, Jane Birkin resurrected two French icons—herself, and the late, great, Serge Gainsbourg. “Serge never got to sing in the United States,” she said. “I’m bringing him further.”

For those rusty on their ’60s European pop icons, Jane Birkin is a 64-year-old actress, singer, fashion it-girl and namesake of the Hermès Birkin Bag (for which there is an actual waiting list. She is perhaps most famous, though, for her tumultuous, 13-year-long relationship with alcoholic, chain-smoking, melancholy musical genius Serge Gainsbourg; one famous late-night spat between the two lovers ended with Birkin flinging herself into the Seine. When they first met in Paris on the set of Slogan, Gainsbourg, who was still mourning his recent break-up with Brigitte Bardot, was cruel and dismissive of the 22-year-old Brit who spoke little French. “It wasn’t love at first sight,” Birkin said last night. “It was better.”

Forty years later Birkin speaks little English—she was completely adopted by the French, who embrace her as one of their own, evidenced Tuesday night by the largely Francophone (and Francophile) turnout. Birkin’s opening comments in English were greeted with audience cries of “en français!” and she acquiesced, lapsing into French for the majority of the evening.

The small square tables of the high-ceilinged Neptune created an industrial café ambiance for Birkin’s renditions of Gainsbourg’s music, a mélange of lounge-y blues, jazz, and reggae. Rich, brassy trumpet and mournful violin tinged her songs with a heroic sadness. Other than Birkin herself, energetic violinist Asuka Maret was the standout, particularly when she emerged out of the audience to join Birkin on vocals for “Shoo Ba Doo Ba Loo Ba.”

In addition to raising money for Fukushima relief efforts, one of Birkin’s main goals is to honor Gainsbourg’s memory, and when she discusses his creative process it is just as we imagine him—spending hours alone at the piano, chain-smoking Gitanes and drinking cup after cup of black coffee. Birkin remained Gainsbourg’s artistic muse even after she left him, already six months pregnant with another man’s child. He used to sing her his new compositions with tears in his eyes.

Birkin strayed away from some of Gainsbourg’s most iconic songs, including “Je t’aime…moi non plus” the breathy, orgasm-infused duet that made the couple famous and was banned by the Vatican. She did sing “La ballade de Melody Nelson” from Gainsbourg’s concept album Histoire de Melody Nelson, which tells the story of the titular Lolita-esque protagonist, portrayed by Birkin. “Amours des Feintes,” Gainsbourg’s final song, written just months before he died, showcased his love of wordplay (the title can mean both love of feigning and love of the dead).

Slightly disheveled in her black slacks and half-unbuttoned dress shirt, Birkin at times seemed a reincarnation of Gainsbourg, often closing her eyes and slipping into slouchy head-bobbing. Then she’d lift her head and smile wide, her charmingly gapped “dents du bonheur” beaming through her tousled bangs. Veering from subdued old soul to excited gamine, at times she charged into the audience, pumped both fists into the air as she introduced her band, and occasionally sat and dangled her legs over the edge of the stage. Center stage, she sang “Les Amours Perdus,” blowing a kiss heavenward as the last notes rang out.

In another quieter moment, she settled herself against the piano, awash in ghostly spotlight, giving her pianist a regard at once fixed and far away. “I always look at him because he is my maestro,” she explained. But some audience members, momentarily transported au bon vieux temps, followed her gaze to another maestro who, 20 years after his death, finally made it to America.