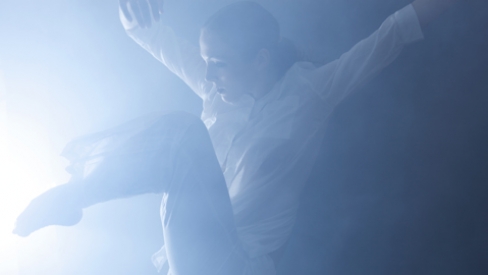 Celebrating the visually abstract, Catherine Cabeen’s world premiere of Into the Void at On the Boards last weekend investigated the intersection of various art forms (dance, music, video, sculpture) while numerous elements in costuming and performance reflected the life and influence of French artist Yves Klein.

In an explanatory essay, Why Yves Klein, Cabeen mentions the artist’s fascination with energy and its effect, and her staging created an air of excitement in the theatre before the lights even dimmed. As the audience entered the theatre, Cabeen was already on stage, laying in a square of light and dressed in drag as Klein. Three vertical panels upstage projected images of her laying in wait.

Upon rising, Cabeen projected herself into a lengthy solo of movement, fast-paced combinations with low-to-the-ground movement juxtaposed with incredibly high kicks and long extensions. Bursts of dancing ended in long pauses, and level changes added to the visual sense of contrast. Cabeen-as-Klein moved around the stage, and at the end of her beginning segment she raised her hands, looking back at the stage, a supplicant to the void from which the other dancers emerged.

As Cabeen was joined by a procession of dancers (Karena Birk, Echo Gustafson, Sarah Lustbader, Matthew Henley and Germaul Barnes) their images appeared on the screens upstage, and there were moments when it was difficult to tell if the video (Tivon Rice) was previously recorded or streaming live. At times the images distracted from the dancing, but Cabeen’s strong modern chorography always pulled attention back to the stage. Movement generating from the core and hips dominated the piece, and a swing-dance inspired interlude with all six dancers provided a light, albeit slightly incongruent pause from the contemporary movement.

Interaction was key to the piece. Whether it was with Cabeen or each other, the dancers often formed pairs or triplets, and in the duets with Cabeen, her character seemed to be leading the movements: grabbing her partner, guiding by the waist—a visual reminder of Klein’s influence striving for control. The one exception was Cabeen and Henley’s violent interactions: Henley is a nemesis for Cabeen’s character; they struggled and fought at various points in the piece, pushing and shoving one another, rolling to the floor with limbs locked.

Klein appears not just in the dancing. There was a spiritual aspect to the piece, embodied in Barnes, who was costumed by Michael Cepress in a long, deep blue flowing skirt. His dancing was graceful and, and he moved lightly around the stage with a quiet authority, at times standing to the back or side of the stage looking on as the others danced. The most obvious reference to Klein was when Barnes and Lustbader stood naked between the vertical panels and smeared themselves blue with handfuls of paint. One of Cabeen’s gender-twisting elements was Barnes’ inclusion in the self-coloring; Klein notoriously used women for his Anthropométries.

No knowledge of Yves Klein and his work was needed to enjoy Into the Void. Cabeen packed the 70-minute show with varied elements and strong modern dance, and a lack of narrative allowed for open-ended interpretations and emotional response. In Cabeen’s numerous nods to Klein throughout the show, surely this was the strongest shake of all.

Image Courtesy of On the Boards.