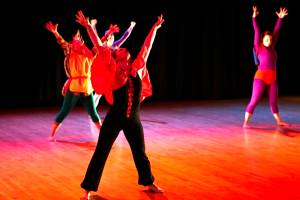 In the very open and experimental world of contemporary dance, pretty much anything goes. Embracing this idea, Kristen Legg, Artistic Director of Redd Legg Dance, organized a show with only one requirement for all the participants: create a piece set to music you’ve been told you should never use as a choreographer. Aptly entitled Music You Shouldn’t Choreograph To, the show ran at the Erickson Theatre Off Broadway last weekend. The mélange of performance styles ranged from modern jazz to theatre-like solos, and a musical set akin to a karaoke bar playlist had members of the audience singing along.

Legg’s show-opening piece, Walking Among Them, was a playful jazz bit that featured four women in colorful clothing constantly breaking away from a larger group clad in shades of grey. Set to Guns N’ Roses’ Sweet Child o’ Mine, the piece was full of leaps and kicks to match the energy of the music. The group phrases were precise, and although the choreography was simple, the dancers’ movement was strong and the message of embracing individuality rang clear.

Although the word ‘mellow’ isn’t generally used to describe Lady Gaga songs, the piece dancing in the basement was just that. Using a ballad version of Bad Romance and a piano adaptation of U2’s With or Without You, the piece by Marlo Martin was heavy on arm and leg angles, but soft in movement. The dancers were costumed in simple brown dresses, the blue-illuminated stage highlighting their limbs. The modern style was very organic, and had an almost spontaneous feel to it, as though the dancers were reacting to the music on the spot rather than repeating learned choreography. Audible breath was used at various interludes, adding to the organic quality of the piece.

A montage to all things 80’s, including denim vests, side ponytails and Bon Jovi, Anne Motl’s Just As Close featured a strong opening duet in which a young woman tries to subdue her fleeing lover. His attempts to escape, and her refusal to let him go, led to a tangle of dexterous swings, lifts, spins and dips. A mash-up of Bon Jovi songs including Livin’ On a Prayer and Runaway, provided the soundtrack to this story of love and heartbreak, and the fast-paced choreography displayed lots of well-executed synchronized floor work.

Legg’s second piece, Unrequited, also explored relationship dynamics, but this time with three separate duets—half of each was a male puppet designed by Gavin Cummins. Each puppet, manipulated by three dancers in black, represented a different stage in life (adolescence, adulthood and late adulthood), and each girl danced in a slightly different style ranging from jazzercise-inspired arm and leg extensions to a dramatically intense (think hair-pulling, arm throwing) modern piece set to Bonnie Tyler’s Total Eclipse of the Heart.

The sole male choreographer, David Lorence Schleiffers set up expectations in About Face with dancers clad in traditional tutus and pointe shoes. The dance was not balletic at all, and the dancers never actually rose en pointe. The piece was full of abstract movement and chaotic background noise (a mix of Mozart, pop ballads and robotic counting) and much movement was done with the dancers bent over at the waist. Although the most difficult to categorize, About Face was striking in its uniqueness from the other pieces; Schleiffers knows how to play with the audience, and does so to full extent.

Closing the show was Second String Superheroes, a comical homage to the underdog, and a reminder that performance doesn’t always have to take itself so seriously. With a cast of five misfit superheroes including Captain Low Glider and The Fifth Turtle, this piece had talking pizza boxes, a roller scooter and a magical toe. It was an unexpected ending for a night of entertaining and varied work, but given the title of the show, it fit quite nicely into the category of ‘anything goes.’