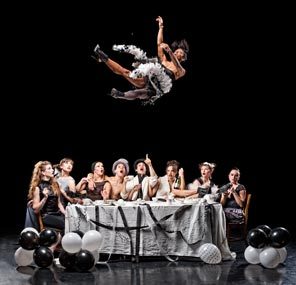 Over the weekend Spectrum Dance Theatre premiered The Mother of Us All, a Donald Byrd choreographed piece concerning the weighty topic of geopolitical concerns in Africa. Steering clear from the view that Africa is merely a continent that needs the aid of wealthier nations, Byrd removes the typical images of starving children and war-torn villages to creating a frenetic atmosphere and athletic movement that presents the idea of Africa without presuming solution or forcing any particular interpretation on the audience.

The dancing was the true heart of the performance, all social and political underpinnings aside. The dancers emerged from a trap door at the back of the stage, which was surrounded by risers that put the audience in close proximity to the action. Dressed in simple, varying shades of grey spandex pants and tops, the females with their hair tightly pulled back, the lack of eye-catching costumes eliminated visual distraction and placed emphasis on each body’s movement. As they careened and gyrated around the stage blending traditional balletic movement (pirouettes, rond de jambes, arabesques) with less rigid, core-based modern dance, each dancer called out the name of an African country. The frenetic pace of this opening sequence, couched in finely choreographed movement that appeared as sporadic reaction to the mix of music and spoken soundtrack, set the pace for the entire hour-long show.

Even in moments when the action appeared to slow down, the dancers were pushing themselves into further limb extensions, jerkier gyrations and more exhaustive motions. Dancers tangle together, roll around the on the floor and in Ty Alexander Cheng and Kylie Lewellan’s case, partner for a series of graceful, contorting lifts. The dancing is underlined with technique, but executed with enough freedom to avoid rigidity.

Several sequences within the whole escape ambivalence and strongly portray the African theme. At one point, three dancers writhe on the floor, tangling themselves together into a pile reflective of a high death toll, the cause of which is left up to the viewer to decide. War? AIDS? Genocide? In Africa the list is long. Another poignant exploration of movement occurs when two groups of three dancers face off, moving around the stage crouched low, slapping out rhythms with their hands against thighs and chests, then stomping their bare feet in expression reminiscent of traditional African dance.

The music (an original score composed by Byron Au Yong), live spoken word (Marsha Nyembesi Mutisi) and recorded soundtrack of various commentators spouting newsworthy phrases like, “This year Barack Obama will devote special resources to Africa,” blend together at times in a cacophonous blur that adds to the chaos factor of the show. Moments of unintelligible political jabber fade into background against the virility and emotional life of the dancing.

In a post-show discussion Donald Byrd spoke about the overwhelming accessibility of conflicting news stories and the wealth of information available about Africa.

“One of the things I was interested in is that the audience curate their own experience,” he said. “I don’t know what the answer is; even the people in Africa don’t know what they answer is. I never felt that the goal of any of these projects was to present a solution. The goal of this piece is to get people to think about Africa during the entire piece. Most people don’t even think about Africa once during their day.”

The audience can’t help but think about Africa during the performance, as the soundtrack provides a constant, needed reminder that that in fact is the focus of the piece. Without it, The Mother of Us All would be just another beautifully danced work from Donald Byrd.