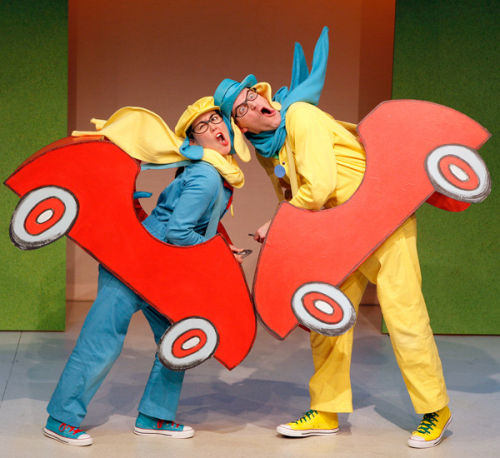 Seattle Children’s Theatre’s current production of Go, Dog. Go!, adapted from the book by P.D. Eastman is a vaudeville-style performance that embraces silliness. Colored dogs jump and dance across the stage, sing and play instruments. They engage in a game of musical chairs with colored trees, and in one scene a saltshaker works for every dog except one. As each shenanigan unfolds the rowdy, young audience shrieks with excitement, chattering to one another throughout the entire show.

City Arts caught up with actor Basil Harris, who plays Yellow Dog. He shared his thoughts on Children’s Theatre, getting ready for a show and what it’s like to be in the doghouse. Again.

It’s not different. At the end of the day you’re an actor and your job is to tell the story and tell it truthfully. Whether your audience is a bunch of 3-year-olds or 33-year-olds or even 63-year olds your job is always the same. With a show like Go, Dog. Go! your characters are not that complex, but it’s physical, and you do have to get your mind and body prepared for that.

Acting in a play at SCT seems like it takes a lot of energy. How do you handle it?

We’ll you’re doing 11 shows a week. We will have done 104 performances. You kind of need to prepare in the long term. You have to go into this process knowing that it’s going to be a long arduous, physically and emotionally demanding process. This is where it’s like any acting job. When you hit the dressing room you have to leave your baggage at the door and your job is intended to serve the play and the audience.

What’s it like to perform for an audience of predominantly children?

They keep you really honest. There are times when if they don’t like something happening on stage they are vocal and they tell you and you don’t get that from an adult audience. It’s very liberating in a way to get out there and do your thing and work really hard and when they like it they REALLY like it.

What is the best part about acting at SCT?

They are so professional and dedicated to bringing professional grade theatre and artists to Seattle and generating local talent. Most of the people who work at the SCT are local and they provide jobs for local talent. I feel really good about working there.

Why is SCT an important part of the Seattle arts community?

It’s holding up the upcoming audiences, and not to be crude, but as most mainstream adult theaters know, their subscribers are getting old and I think a lot of theaters are scrambling to attract younger audiences and the Children’s Theatre is absolutely essential in this. It’s kind of along the line of having Fred Hutch or Children’s Hospital in Seattle. Seattle Children’s Theatre creates a benchmark. It just doesn’t happen in other cities.