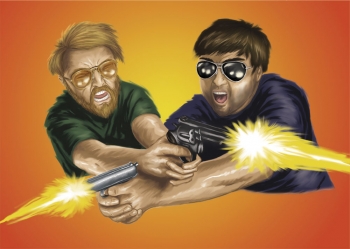 On Wednesday night, the final episode of Seattle’s homegrown action-comedy series Adventure Buddies debuted at the Sunset Tavern. Adventure Buddies, the weird, Gilliamesque brain-vomit of Kevin Clarke and Travis Vogt, spans a million-year timeline and at least two planes of existence over the course of its six half-hour episodes. We got in touch with Travis Vogt following the premiere (be warned: this interview contains spoilers).

Until probably the fifth episode there could have still been some debate over whether you were just making things up as you went along. To what degree had you mapped out the story before filming the first episode?
I have to be honest with you. We really did know that we were going to be the bad guys in the end. Maybe we didn’t know that this was the exact way it was going to happen, but we knew that it would be the two of us being all evil in the end. Kevin and I both love it when the good guy ends up being the bad guy. It’s oddly satisfying.

Now that it’s all in the can, any future plans for the series?
We have so many ideas. If you’ve seen the show, you know that it’s designed so that pretty much anything can happen. I feel like we really milked the premise for the show as it is, but if Adventure Buddies was financed, it could quite possibly be the most ridiculous show that ever existed. And that’s counting Night Court.

What’s next for ClarkTheVogt Productions?
We want to make a full-length feature film. Probably a horror/comedy. With giant bugs. Something we can work on without having to worry about monthly release dates. That’ll be sweet, and man will it ever be gory!

The first five episodes of Adventure Buddies can be found online at Funny or Die. Watch the first episode here.