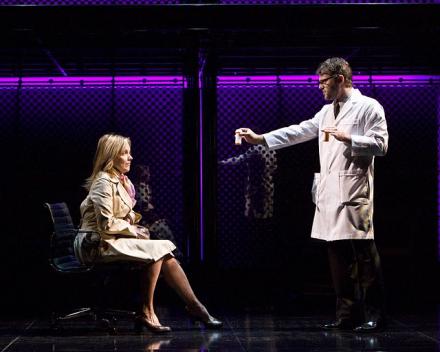 Alice Ripley and Jeremy Kushnier as patient and doctor in Next to Normal.

A musical about bi-polar disorder, electroshock therapy and depression might not sound like an enjoyable night out at the theatre, but the show’s rocking soundtrack, abstract set and expressive performances hook the audience and push this musical into a serious exploration of the realities of mental illness. Next to Normal, which opened last night at the 5th Avenue Theatre, is based on the book by Issaquah native Brian Yorkey. It won three Tony Awards in 2009 and the 2010 Pulitzer Prize for Drama.

The Goodman family is suburbia-dwelling set, headed up by Dan (Asa Somers), a loving husband who desperately shuffles his wife from doctor to doctor trying to cure her. Diana stays at home cooking and cleaning and trying to deal with illness. They have a withdrawn, brainy daughter Natalie (Emma Hunton) who grew up neglected in the shadow of her brother Gabe (Curt Hansen), an elusive and charming teenage boy.

The show portrays the confusion, turbulence and helplessness of mental illness without getting too far into crazy land. Mentally ill mother Diana Goodman (Alice Ripley, who won a Tony for the part) remains intelligent and likable throughout the play, even through her darkest delusional moments, and the story explores the devastating effects of her disease on her family.

The very serious issue of Americans and their relationship with prescription medication lingers beneath the constant psychobabble humor. At one point, Diana’s doctor (Jeremy Kushnier) gives her instructions for the litany of pills she is taking, advising that “…The round blue ones with food, but not with the oblong white ones. The white ones with the round yellow ones, but not with the trapezoidal green ones. Split the green ones into thirds with a tiny chisel, use a mortar and pestle to grind…” The audience laughs, but with tens of millions of Americans on anti-depressants alone, it takes a contemplative step away from humor. Prescribed medication has its dangers, and they are not a joke.

As Diana spirals deeper and deeper into neurosis, eventually landing herself in the hospital and submitting to electroshock therapy, Natalie struggles with her own emotional issues and experiments with her mother’s medicine cabinet. Dan evolves the most—from a put-on-that-smile upbeat husband who loves his wife through even her lowest point, to a broken man left in the throes of emotional loss.

The conclusion of Next to Normal is ambiguous, leaving many questions unanswered. Is Diana’s mental illness a result of genetics, a catastrophic event in her life or environment? Often, questions overlap for several characters. As Dan sings, “Who’s crazy, the one who’s half gone, or the one who hangs on?” As so many people who have experienced depression themselves, or been close to someone who has, these are very real questions.

Many movies have tackled the subject of mental illness, and a majority of them either romanticize it as the impetus of artistic or academic genius (A Beautiful Mind), or take it to violent extremes (Black Swan, Donnie Darko). Next to Normal has its campy moments that include lots of strobe lights and bits of cliché, indeed the whole comfortable housewife turned unhappy story isn’t revolutionary, but the concept is spot on—this woman could indeed be your neighbor and you might never know what she suffers. Maybe Next to Normal is a little more normal than it seems.

Next to Normal runs through March 13. Tickets available here.