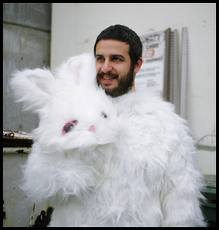 Sometimes a well-done music video can offer a dud song redemption. This is one of those cases.

“Devils,” the first single off of the latest Say Hi record, Um, Uh Oh, has been a non-starter for me. One of the weaker tracks on an otherwise very solid album, the song lacks the pop hooks and populated, dynamic instrumentation found in the band’s better tracks. Instead, this is something of a dirge that features a spare rhythm section supporting a very dry recitation about the devil delivered by Say Hi’s primary member Eric Elbogen. Aside from a driving guitar line towards the end – an indication of the more impressive and aggressive guitar work found throughout the album – the song strikes me as a bore.

The video for “Devils,” directed by Carlos Lopez, could easily have been just as boring. It recounts one of music mythology’s most well-worn tales after all. But fortunately, Elbogen is not only a brilliant musician, but an endearing personality and his comedic performance as the protagonist here gives this telling a very fresh and funny new face. The most disappointing thing about “Devils,” the song, is that it doesn’t sound like Elbogen is having any fun making it. The most satisfying thing about “Devils,” the video, is that it is clear he is loving his time in front of the camera. It’s enough to redeem the song.