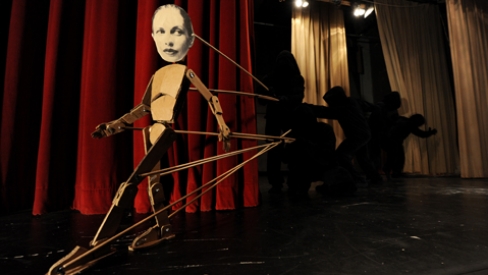 Astronomers can’t describe the cosmological phenomenon of “dark matter,” but that hasn’t deterred choreographer Crystal Pite. In her work Dark Matters the Vancouver BC-based choreographer explores the concept of “dark matter” and unseen forces at work on the body, mind and the universe. Her company, Kidd Pivot Frankfurt RM, will perform the piece starting tonight at On the Boards.

“There are two distinct acts,” Pite explained while briskly pushing her eight-week-old son’s stroller to Metropolitan Market. “The first one is theatrical, it’s really a puppet show, and it sets up what the show is really about. It is the key to watching the rest of the show insofar as it deals with the ideas of control, manipulation, the story of creation and destruction. Lots of big ideas.”

The second act is purely contemporary dance, and focuses on a lot of cause and effect motion. The dancers are ridiculously talented, and even in rehearsal they navigate the stage with the grace and precision usually afforded an actual performance. Most of their movement comes from the strength of the core, but limb extensions and weight transfers are often fluid and soft.

Kidd Pivot has performed Dark Matters at least 40 times, but due to Pite’s newest family addition, the choreographer will not dance for the Seattle audience this weekend.

“I love performing and I miss it, but Sandra is so incredible,” she said of the woman taking her place. “It’s nice for me to have an opportunity to see the show from a different perspective and learn from her as a dancer.”

Pite says the company is happy to be back in Seattle because it is a familiar place for them (the closest to their home base) and they have performed at On the Boards before. She is also proud to be showcasing Dark Matters, as she feels it really represents her as an artist.

“Out of all of my pieces, this one feels like it is most indicative of me,” she said. “It looks like something that if I had seen it elsewhere I would have liked to make,” she paused smiling, “and lucky for me I did make it!”

Dark Matters will run at On the Boards through Sunday February 20.

Image Courtesy of On the Boards.