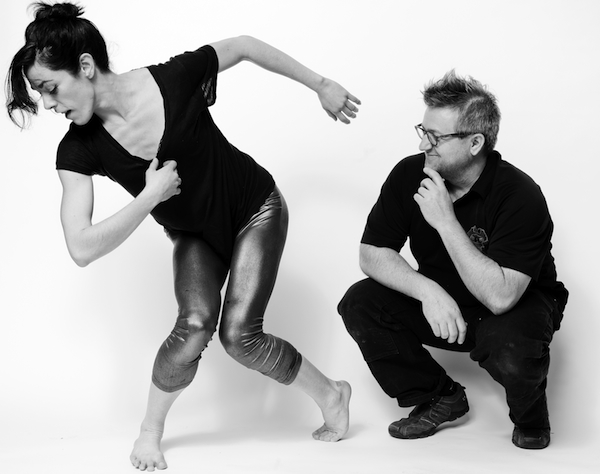 Last night four dance companies went toe-to-toe for the chance to win $10,000 in the second annual On the Boards A.W.A.R.D. Show. This year, the rules of engagement have changed as organizers allowed burlesque and vaudeville-type acts that might not traditionally be looked at as “dance”. Adding funny sets is always an audience pleaser, but it does run the risk of skewing votes towards something people view as “entertaining” rather than innovative choreography or technical dance.

zoe | juniper took the stage first with an excerpt from choreographer Zoe Schofield’s A Crack in Everything. A visual-heavy stunner, the piece began with a single dancer on stage, a long red string trailing from her mouth to an unseen point offstage. Half of the performance seemed like visual art, with more vibrant red string, played-back images of a dance on a grey video screen, and a devolution into Schofield and her male dancer (Raja Kelly) stripping nude and violently barking while facing one another in chairs. An investigation into the beastly side of human nature, the piece begged for more of Kelly’s dancing. The string in his mouth seemed to be holding him back, but perhaps that was the point.

The Cherdonna and Lou Show followed zoe / juniper with an act I would hesitate to label as “dance”. An excerpt from It’s a Salon! the piece featured choreographers Jody Kuehner and Ricki Mason performing as the namesakes of their act, mixing music, lip-synching, comedy and movement in a performance that was funny, but seemed a little forced. The audience appreciated the effort, responding with hoots of laughter.

Following the humor-inducing duo was a serious work from choreographer Crispin Spaeth’s Only You. A gorgeous montage of coupling between various dancers, the piece was balletic and fluid, exuding a sexuality that wasn’t tawdry or offensive. Every dancer on stage clearly had strong technical training and I couldn’t take my eyes off their pointed feet and effortless lifts. There was hardly a point in which two dancers on stage were not touching and yet the motion wasn’t clumsy; they explored the boundaries of what kind of movement is possible within certain bodily constraints.

The final performance of the night was from Shannon Mockli’s and another war broke out, set to the spoken word of Laetitia Compiegne de Sonami. The modern dance featured two women on stage, each one isolated for a majority of the time, yet they intersected at moments while moving through the space with lots of repetitive limb movement: gracefully high kicks and controlled arms. Overall, a very solid performance.

Although my top vote was for the Crispin Spaeth dancers, overall the audience chose zoe | juniper as the night’s winner, meaning they will advance to the finale on Sunday night.