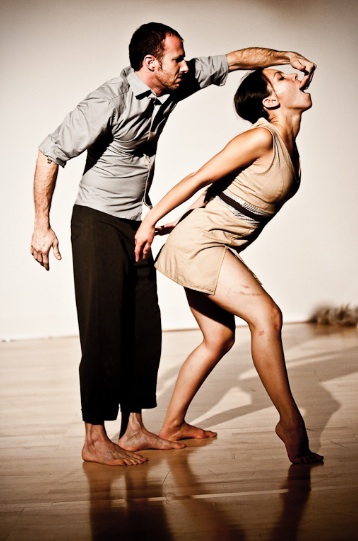 Three nights of fierce dance competition came down to three 15-minute performances last night, with each audience-chosen group attempting to impress a panel of expert judges for the grand prize of $10,000.

zoe | juniper, The Offshore Project, and tEEth each showcased their pieces one more time, and the intensity of competition was obvious. The dancers pushed themselves, performing better than their initial night’s presentation.

The panel of judges included last year’s OtB A.W.A.R.D. Show winner, Amelia Reebar, associate professor of Dance at UW, Jennifer Salk, the Executive Director and Trustee of The Joyce Theater Foundation, Linda Shelton, and Seattle-based choreographer Pat Graney. The audience still had its say, but crowd voting was only 1/5 of the final score.

Turns out my prediction was correct, and tEEth was announced as the 2011 OtB A.W.A.R.D. Show winner. After the group ecstatically cheered, teared up and exchanged a round of hugs, I snagged a moment with choreographer Angelle Hebert, who was so overwhelmed she could barely speak.

“I’m excited, I’m happy, I’m, relieved,” she gushed looking at the crowd around her and stopping to accept a hug from a fan.

And what do they plan to do with the prize money?

“We are definitely going to put it towards a new project we will be working on in April,” Hebert smiled. “And also use some of it to pay off the trip to Seattle.”