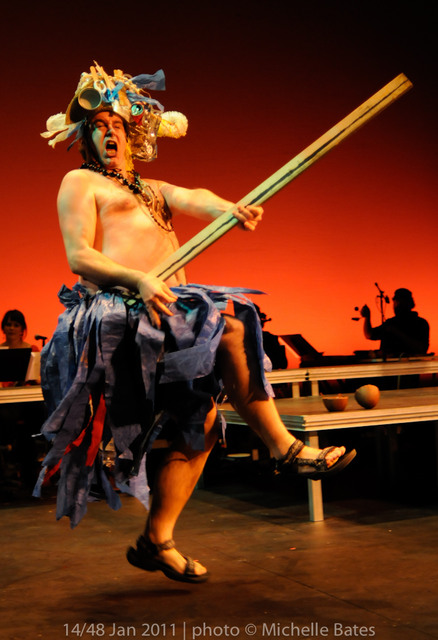 “14/48 begins when the keg is tapped,” laughs Andy Jensen, a member of The 14/48 Steering Committee (the people who make things happen) and veteran participant in the festival. “It’s a real honor to get the first draft off the keg!”

The honorary keg tap will happen tonight at 8 pm when over 70 artists gather at the ACT Theatre to kick off the second weekend of this year’s 14/48 festival. The annual event, as the name suggests, involves the writing, casting and production of 14 original 10-minute-or-less, plays in just 48 hours.

“On Thursday night all the artists gather, including the band members, the designers and the volunteers,” Jensen explains, “and everyone fills out a theme slip that reads ‘Theater would be a lot more interesting if there were seven 10-minute plays about ______.’ And then everyone suggests a theme.” The themes are then randomly chosen, and based on the actor pool for that weekend, playwrights are assigned a theme.

“We say, ‘Go write a 10-minute play based on your theme,’ and they have to email it by eight’ o’clock the next morning.” After all submissions are in, The Steering Committee prints them out, puts them in blank manila envelopes and the directors choose one at random. Actor designation is done with directors drawing names from cans labeled either ‘Tom Selleck’ or ‘Farrah Fawcett’. From 10:00 a.m. onward, the day is a tight schedule of rehearsing, directing, working with the band, talking to lighting crews, and a very brief 20-minute tech rehearsal.

“We always tell directors the goal is a complete run-through,” muses Jensen, who participated in last weekend’s run as a director, “but it’s kind of like scoring an 18 in golf…probably not going to happen. But that’s the goal.” By 8:00 p.m. the show is done, and the audience gets a batch of theme submission slips that will be used for the next night’s performances.

“That’s the thing that a lot of people don’t get about this. The plays are never done again. You get a world premier and a closing night, and then seven totally brand new plays with new folks the next night.”

Jensen is considered a “veteran” of the 14/48 festival, as he has been participating since 1999. According to him, they try to get at least 25% new talent for each round of 14/48, and the newcomers are dubbed the “virgins.”

“The main focus of the festival is the community that we build, and not just with the artists working together for the first time, but also with the audience,” Jensen contends. “My favorite part is meeting all the virgins on Thursday night because often they are people who have worked in town for years, but it’s their first time doing 14/48, and it is so amazing to see what they can do.”