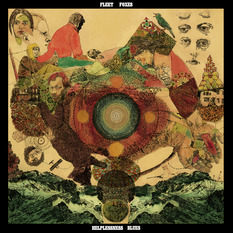 This morning Sub Pop answered one of the most asked questions in the world of music: When will the next Fleet Foxes record come out?

The Answer: The twelve-song collection – called Helplessness Blues and recorded with the help of Phil Ek at a number of studios, from Avast Recording to Bear Creek Studios to Dreamland Studios to Reciprocal Recording – will be released May 3.

And what does it sound like? Sub Pop answered that question too by releasing the album’s title track, a song that stood as the clear highlight of Foxes front man Robin Pecknold’s solo performance opening for Joanna Newsom at the Moore Theatre last August. In an uneven set of new material, “Helplessness Blues” stood out mainly because it sounded like it could have appeared on the band’s breakout 2008 debut. Pecknold’s at-times soaring delivery was there – and though he was the only one on stage, the song left plenty of space for the three other voices that help create the band’s transcendant harmonies. What was different was a newfound clarity of Pecknold’s lyricism. Though he recently told Rolling Stone that the band’s use of an instrument called the Marxophone was “the most political thing on the record,” he does seem to be delivering a message here, and one that should resonate with priviledged fans who embrace music with its origins in the labor movement, but who know very little of toil themselves.

Fortunately, the album version does not attempt to dress the song in sentiment or force feed its message. For the first, especially, little is different, with Pecknold’s voice appearing over a light acoustic strum to sing, “I was raised up believin’, I was somehow unique, like a snowflake distinct among snowflakes, unique in each way you can see.” From there the song fills out with a single harmonizing voice for three minutes before a J Tillman’s drums enter and lead the song into a relative bombast with the band’s trademark four-part harmony, singing, “If I had an orchard, I’d work till I’m sore,” before Pecknold voice alone, with some resignation, sings, “someday I’ll be like the man on the screen.”

Sub Pop also announced that the band will kick of its first tour in a year-and-a-half April 30 at the Vogue Theatre in Vancouver, with a stop planned for May 3 at the Moore in Seattle.