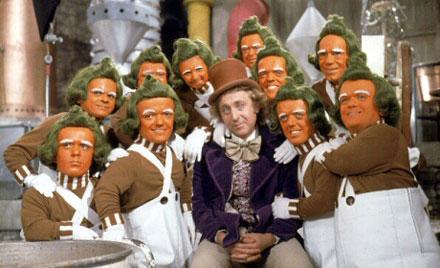 Experience Willy Wonka is Smell-O-Vision at SIFF Cinema this weekend for an all-sensory twist on the classic film.

With heart of the holiday season upon us and Christmas approaching in fifteen days, ‘tis the season for holiday plays. Relive the past this weekend at the Open Circle Theatre with the Judy Garland Christmas Special in a reimagining of Judy Garland’s drunken 1963 special, or head to Book-It Repertory Theatre for Red Ranger Came Calling: A Guaranteed True Christmas Story. If it’s the classics you seek, A Christmas Carol at ACT and The Christmas Story: The Musical! at the 5th Avenue Theatre have got you covered.

Rock ‘n’ rollers The Posies are alive and kicking and at the Showbox Market tomorrow night (Saturday) with Brendan Benson of the Raconteurs. This Seattle-based band’s seventh and latest release Blood/Candy proves that the band that has spanned three decades still has it.

Experience the super sensory version Willy Wonka and the Chocolate Factory this weekend at SIFF Cinema as they present Willy Wonka in Smell-O-Vision, back for a second year complete with fragrant goodie bags full of treats and interactive moments throughout the show for a Wonka experience that matches the adventure of the movie.

Last Wednesday, the Seattle Art Museum revealed work from some of the best high school photographers in Washington State, picked from a pool of thousands. Check out the young local talent on display at the SAM now until March 6.

Critically acclaimed World War II historian James Bradley will be at the Elliott Bay Book Company tonight (Friday) at 7 p.m. with his latest book, The Imperial Cruise: A Secret History of Empire and War released last year. Author of Flags of Our Fathers and Flyboys, Bradley takes on the presidency of Theodore Roosevelt and his diplomatic mission that would have divided Asia.