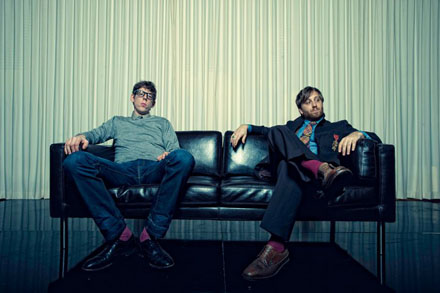 Often when I play The Black Keys on the jukebox at work to fuel my booze slinging day (I’m a bartender), the interest of patrons is piqued and questions regarding who the band is ensue (many liken them to the White Stripes or Led Zeppelin). The Black Keys have made their mark in this last year with Grammy nominations, a #2 spot on Rolling Stones “Best Albums of 2010” and Brothers (the name of their most recent album) was recently named iTunes’ Album of the Year earlier this month.

It is a rarity that I see the same band twice in the same year, rare as in never. Yet, here I was, just in awe of a band of when I had seen them only a few months prior. Having seen them rock the Paramount back in October, I still found them the highlight of The Deck the Hall Ball, at WaMu Theater this past week. They are some talented gentlemen. The juxtaposition of hard rocking guitar riffs, hard pounding beats and Dan Auerbach’s smooth, bluesy vocals is a rare breed of music. Auerbach’s smoky voice is reminiscent of the birth of jazz, puffs of cigarettes between your sips of bourbon.

Carney is a beast on the drums, rarely relenting as he stomps and thumps out the foundation of every song. Auerbach, all the while crooning, plays the guitar with passion equal to Carney. Being a duo (primarily, sometimes they are joined by two other members) Auerbach and Carney share a passion and convincingly transform a jam session into a performance.

Sadly, The Black Keys are bringing their U.S portion of the Brothers tour to an end and will shortly be heading over to Australia and Europe to finalize their tour. That just means unless you’ve planned a trip “down under” and have passport in hand, you will have to anticipate their next album, likely to be pretty much awesome. For those who are not long time fans of the Ohio based duo, I suggest a you give them a shot.

Their accolades are well earned. Currently their single “Tighten Up” sits at the top of Billboards top rock songs, (Auerbach has quite the impressive whistle to kick off the song, even dripping in sweat, mid-way through a set). Though, this live performance of “thickfreakness” is a good example of their successful hybrid of rock and blues, while conveying a dynamic presence on stage.