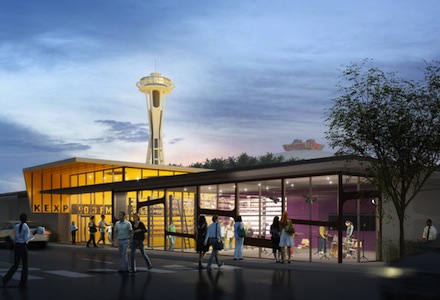 After months of debate and media speculation, some of which occurred in City Arts last month in “Five Myths About the Chihuly Museum,” in a press release earlier today, it was announced that Mayor McGinn would recommend both radio station KEXP and Dale Chihuly’s plans for remaking Seattle Center to the Seattle City Council.

“We’ve listened, and we’ve worked hard to bring forward a set of proposals to make Seattle Center more vibrant, more kid-friendly, and more financially stable,” said Mayor McGinn in the release on his Web site. “I’m impressed by the commitment to community of everyone involved.”

As the plan stands now, KEXP would take over the existing Northwest Rooms on the West side of the campus and remodel the buildings to support the existing studio demands of the station, as well as adding an outdoor stage for live performances (promoted as hundreds every year) and more interior space to allow for larger audiences during the stations well-known in studio performances.

And as expected, Chihuly would assume control of the now closed Fun Forest Site, transforming the land into an exhibition area for his glass art for up to the next twenty years alongside a planned green open space, also included in today’s proposal. The Chihuly exhibit would also provide $2 million towards a family play area adjacent to Memorial Stadium.

From here, the McGinn’s proposal goes to the City Council for its final approval.