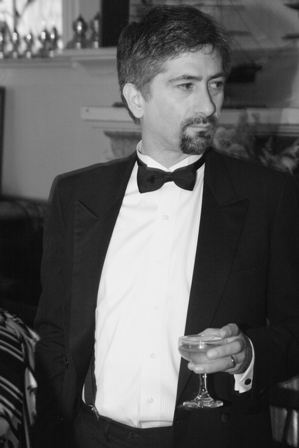 In this month’s Ampersand section, playwright John Longenbaugh contributed an excerpt from his play “A Wild River.” In the play, a journalist from Rolling Stone is sent to interview the first female Pope, whose attending monks can’t help but accidentally call her ‘Holy Father.’

Aside from being a woman, the new Pope, Grace, is hooked on soda and talks like an over-caffinieted but, nonetheless genuine, college freshman.

It’s supposed to be funny, however, there are moments of seriousness and religious dialogue.

From Grace in the play:

My job is not to just lie midstream and let the currents rush past. It’s to help people navigate the waters of faith to a tranquil sea.

Behind the excerpt is Longenbaugh’s twenty years of playwriting experience, a connected series of twenty-one other plays and a surprising mix of religious and cult experience.

Can you tell me a little about yourself?

I’ve been directing plays professionally since graduating from London’s Central School of Speech and Drama back almost 20 years ago, and I’ve been writing plays since coming to Seattle in 1995. I’ve worked with a whole lot of Seattle’s fringe companies and a couple of professional houses as well, including Taproot Theatre, who are currently producing the world premiere of my play Sherlock Holmes and the Case of the Christmas Carol, running through December 30.

Where did this play come from?

First: a deadline. I wrote the piece for a 24 Hour Theatre Festival about four years ago, and so it was written between the hours of 10 PM and 3 AM on a warm summer evening. I was inspired by the Tarot card known as “The High Priestess;” this is one of about a dozen plays I’ve written based on Tarot cards. And the title came from a walk through the soon-to-be-demolished Fun Forest at Seattle Center—“A Wild River” is the log ride for kids.

Can you describe what debate you’re engaging in regarding theology/philosophy in this piece? Or is it just having fun with religious ideas?

I’d call myself an agnostic whose hobby is religion. (One of my plays is called “Bible Stories for Agnostics.”) I worked as a librarian for the Catholic Archdiocese for about two years, a fascinating anthropological study that gave me a lot of respect for Catholics but less for their church. It was interesting to me that the power structure in the Archdiocese was a dedicated staff of ultra-competent people, mostly women, supervised by an exclusively male priesthood.

Continue reading after the jump.

While the Pope is a real person in a real position of authority, it’s also an ideal. As a liberal person of indeterminate faith who I would want as Pope would be someone who could shake loose the Papal power from the atrophied grasp of old white men to deliver a message not of unchanging tradition but of love. There’s nothing easy or mushy about love, despite what all the songs say. Love, like faith, is a tough battle, and a religious leader should not just hand down decrees and provide comfort. A Pope should speak and act in a way that encourages people to really confront and understand what they believe, as well as return to the fundamental message of Christianity: love thy neighbor. And so the character of Grace was born.

The play’s complete, but as mentioned it’s one of about a dozen plays based on the Major Arcana of the Tarot deck. (Other plays were based on cards that include The Sun, The Moon, Strength, The Lovers, and The Star.) This September Open Circle Theatre premiered Arcana, the first time I’ve had a chance to have these thematically linked plays performed together, and the audience and critical response was strong, so I’m encouraged to complete the cycle of twenty-two short plays.

Any production plans for the play?

It’s been a great year for “A Wild River;” the play won Best of Show in Open Circle’s “Eat My Shorts” short play festival, and it was a favorite with the Arcana audiences as well. What was particularly fun was having two different Popes for the two productions. Keridwyn Deller, Pope #1, brought a hilarious warmth and goofiness to her performance, while Erin Ison as Pope #2 was more commanding and regal—until she’d deliver a line as dry as a chilled martini. Both looked absolutely great as the Pope, I should mention; we borrowed a resplendent robe from Taproot that managed to both convey gravitas and show a lot of leg.

Next production will probably be whoever decides that the play sounds like fun. Having it published in City Arts is no doubt going to help out that process quite a bit!