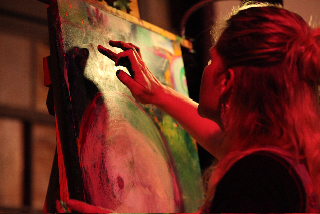 What do you get when you throw a group of musicians, two poets, three painters and an improv band together in front of a crowd? 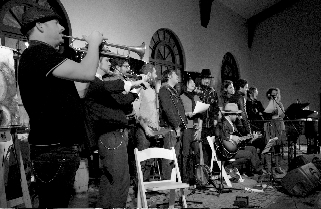 The Round participants join together to sing Silent Night with the audience.

While the outcome may be questionable in theory, Fremont Abbey pulls it off every month with The Round, a collaborative music, slam poetry and visual art show that proves to be a unique experience for all involved, including the audience.

This past Tuesday, The Round held its annual Christmas show, with all proceeds going towards the organization’s Youth Arts Programs, which foster everything from dance to music.

I had never been to The Round, and even when Executive Director Nathan Marion explained the concept, I still didn’t know what to expect. As the annual Christmas program, each musician was allowed to perform two songs reminding them of the holiday season, even if they weren’t traditional Christmas songs.

The musicians (including Big Sur, Aaron Sprinkle, Goldfinch, and Tony Kevin Jr.) shared the stage with painters Shannon Roche, Geoffrey Garza and Cyndee Baldwin, who worked on canvases that were later auctioned off to also benefit Fremont Abbey Youth Arts Programs. At the end of the night, this evening’s audience gave over a $1000 for the program.

It was amazing to watch the artists play off each other with music and performance because they had never once practiced together. It was all about improvisation and collaboration. Two talented slam poets, Matt Gano and Garfield High senior Troy Osaki got up during each act and spoke their work while backed by the musicians. During one of Gano’s pieces “To the Moon”, I was actually moved to tears.

Aside from traditional Christmas numbers such as “Baby it’s Cold Outside” (a crowd favorite) and “Oh Holy Night”, Leslie Wood recounted the story of when she asked her husband to marry her, then sang a gorgeously slow rendition of Johnny Cash’s “I Walk the Line”, as it reminded her of the love she shares with her husband. Sean Nelson had the crowd in fits of raucous laughter until he and two others stunned us with an a capella 16th century Spanish Christmas song, and the entire group of musicians invited the crowd to join them in closing the evening with “Silent Night.” We were more than happy to oblige.

Artist Cyndee Baldwin paints with inspiration from the musical performances.

Marion (and I think most everyone in attendance) dubbed the show a huge success. “I think it was really beautiful,” he said. “I think it was a pretty amazing example of collaboration at its best. It’s a lot about the community and getting people together so they can find some commonality and be open to the beauty and mystery of a show like this.”

Even though it won’t be holiday-themed, be sure to catch the next evening of The Round, which is scheduled for Tuesday, January 11.