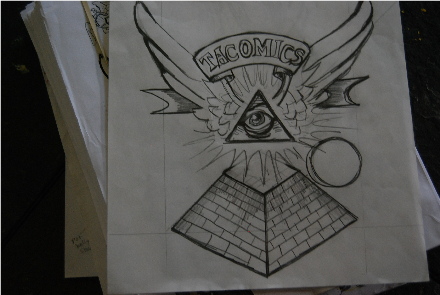 I have had the pleasure of previewing what will surely be a Tacoma classic.

100 Tacomics: The Secular and Apolitical Cartoon Life of Tacoma and Her Moral People(s) is a compilations of works by artist, cartoonist, political button-pusher and Tacoma jokester, R.R. Anderson with foreword and writings courtesy of John Hathaway of The New Takhoman. To get my hands on it early, I had to fight tooth and nail in a nasty brawl…

Whatever. Tacomics features a collection of political cartoons created by Anderson from 2007 to 2009. And if you reside in, or are familiar with, the City of Destiny (or surrounding areas), you will laugh your arse off. Even the most profane and twisted entries will illicit chuckles, because like every good joke, they hold a truth that you can relate to. It’s thought provoking, entertaining and displays an impressive creative talent.

Extras include a history of Frost Park Chalk Challenge, loads of chalk art photos and a super bonus: “Learn 2 Draw in 3D”.

Today, November 15, at 7pm, join me at the official book launch, which is being held at King’s Books as a part of Tacoma’s Art at Work month.

If you’re unable to attend, find the book and more information on the author here.