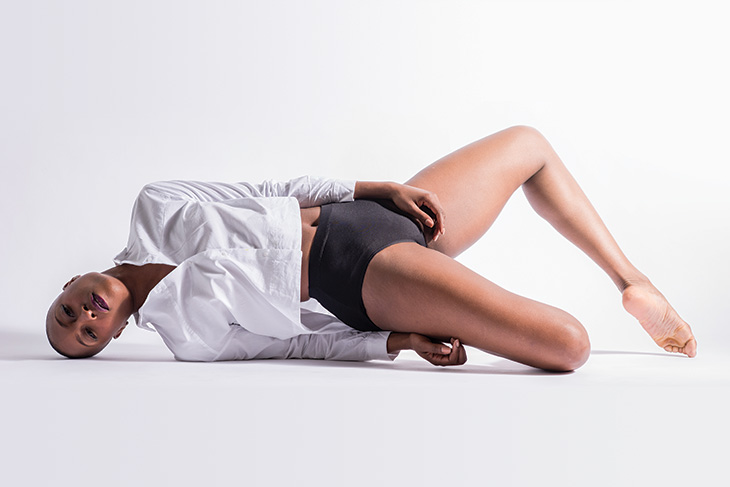 For Jade Solomon Curtis, activism is the muse.

On stage or off, dance artist Jade Solomon Curtis radiates passion and honesty. We’re talking about the inspiration for her long-brewing multidisciplinary dance work Black Like Me: An Exploration of the Word Nigger: rage at the war on Black Americans, her own lived racist experiences, dismay at the hip-hop community’s casual use of a word forged in hatred.

“I don’t have a choice,” she says with matter-of-fact vulnerability. “I can’t sleep at night.”

Black Like Me is Curtis’ first evening-length work as an independent artist in Seattle. Local dance lovers know her as the powerful, expressive and elegant soloist who spent four seasons with Donald Byrd’s Spectrum Dance Theater. Last year, Curtis parted ways with the company to explore her own creative, choreographic voice.

“[Before Spectrum] I would say I was afraid of dance, afraid of what my body could do—and with Donald you didn’t have time for that,” she says. “He makes phenomenal dancers because he sees what you’re capable of physically and he also challenges you mentally, and once those two things are aligned, it’s fire. I’m still discovering what that is for me. I’ll always be discovering that, I hope.”

The five solos of Black Like Me approach the word in different ways. (And to be clear, she says, if she had more money they wouldn’t be solos. “I had to do what was affordable, and it’s important that everyone I work with gets paid.”) One piece is about liberation, what it means to transcend the N word in the context of a slave. Another connects the word, directly and explicitly, to gunshots. Another revisits imagery associated with the word: “gold chains, sagging pants, a woman that’s the epitome of the ghetto, ratchet woman, which is how a lot of outsiders view Black women,” she says.

“When I think of nigga with an ‘a,’ I think of how people try and defend it,” she says. “‘It’s a term of endearment.’ ‘That’s my homie! That’s my nigga!’ ‘It doesn’t have a negative connotation.’ But then you open the word up and look at the –er behind it, then you see the ugly. Then you see the pain.”

Curtis questioned including the word “nigger” in the title of her piece, but knew that her discomfort meant she had to. “The intention of the title is to make you say it,” she says. “It’s supposed to make you uncomfortable—it makes me hella uncomfortable.”

Each solo has a distinct movement style that combines Curtis’ classical dance background with a hip-hop vocabulary, though she’s actively divesting herself from the arbitrary rules of any given style. She’s collaborating with Atlanta-based visual artist and longtime friend Daniel Barnes and local DJ Topspin, as well as New York activist and icon Walter Beach III, who will lead pre-show panel discussions—no tacked-on, after-the-fact talkbacks here. Curtis doesn’t want you just to witness, she wants you to engage. That’s one reason she chose the informal Fred Wildlife Refuge as her venue, to remove any barriers to entry that make dance feel inaccessible.

Black Like Me marks the official launch of her nonprofit organization, Solo Magic. Rather than start her own dance company, a limiting and decreasingly viable model, Curtis wants Solo Magic to facilitate project-based, collaborative work between individual artists to coming together around one singular message. “Activism is the muse.”

Black Like Me: An Exploration of the Word Nigger runs March 24 – 25 at Fred Wildlife Refuge