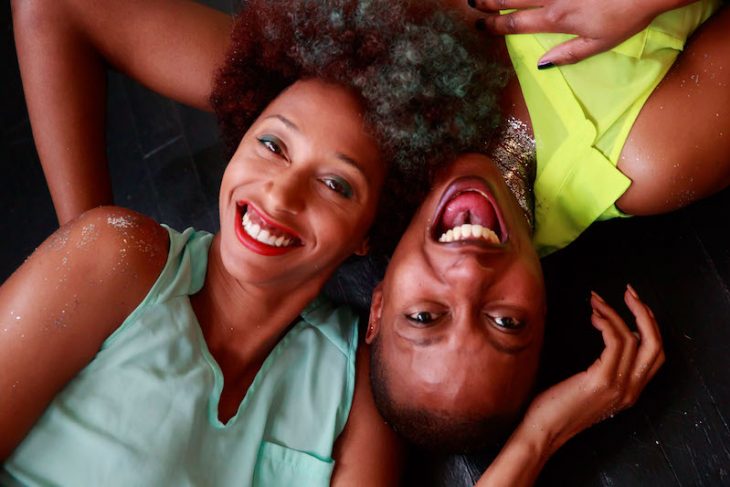 “If you want something to go viral, just piss enough people off,” says Natasha Marin. “That’s Trump’s America: You need to be hyped up and pissed all the time.” Imani Sims nods.

The conceptual artist and poet have just finished a promotional photo shoot for their new art project, Black Imagination—silver-glittered makeup from the shoot still visible along Sims’ neck. They’re exhausted, but not too tired to offer, half-jokingly, some titles for this article.

“What about In this chapter of Black womxn doing extra? Boom!” Marin chortles. “Or quote Kendrick Lamar, Sims chimes in. “We gon’ be alright—that’s Black as fuck.”

The dark, late afternoon December air promises a freezing night. Inside The Station cafe on Beacon Hill, the duo warms up with tea and pleasantries when we meet to talk about exhibition Black Imagination, which they co-curated with performance artist Rachael Ferguson and writer/curator Amber Flame.

“Or maybe it should be: It’s not about you,” says Marin, still offering more possible titles. “That never fails to make white people mad.” She stops herself. “Maybe the title shouldn’t center whiteness. So: It’s about us.”

As is Black Imagination: The States of Matter, which opens at Core Gallery on Jan. 4 before traveling to Feast Art Center in Tacoma in April. The exhibition imagines a space beyond the white gaze, a live experience exploring Black joy, wellness and creativity. What the experience will be, or look like, is deliberately swaddled in secrecy to pique people’s interest. What is certain: Combine four artistic forces like these, and the experience is likely to be both dramatic and moving.

The idea sprouted this summer, in the green room of radio station KUOW. Sims and Marin were set to speak, but before going on air, “We were listening to two white police officers talking about the then-recent murder of Charleena Lyles,” says Sims.

“We wondered what an eye for an eye would look like,” says Marin. “We stuck our toes in that revenge-pool for just a moment, but people are not ready to even begin thinking about that. The goal of this project is to imagine a world apart from the white imagination, which takes place from the surface of our skin outward to everything that we see. The Black imagination goes inside. And sometimes it goes to dangerous places.”

Because of that urge for revenge?

Sims: I don’t know about calling it revenge. Let’s say reparations: Simply imagining a world where I can string a white woman up by her toes and leave her in my garage for two days should be fine, given that we’ve been so colonized and culturally appropriated for so long. Everything we created was sold and given to the masses; that’s what American culture is. We didn’t want to recreate a culture we didn’t ask to be in. It’s about what we imagine. Where’s our joy? Where’s our happy place?

Marin: We put out a call for Black people—incarcerated people, children, people with disabilities and creatives from the city—to tell us about their origin story. We asked them how they healed themselves and if they could imagine a space where they felt loved, safe and valued. For some people, that requires a lot of imagination.

Marin: You’ll enter a space of the Black imagination for 30 minutes. Everyone will have to make a reservation, but the first Black people to make the leap will be paid to show up: Their time, and hope, is valued. Non-Black people of color will pay on a sliding scale for a minimum of $5, and people who identify as white will pay the most to experience this, $20. I’m more interested in the novelty of being Black and actually showing up just to be surrounded by other Black people. For the most part, Black people don’t tend to be great art consumers as we have other shit that we have to tend to. The ability to take in art requires babysitting, parking, gas, time.

Sims: It’s really hard for people of color and Black womxn in particular to own our own history. This is an opportunity for us not only to give ourselves something we can nourish ourselves with, but also give ourselves something that we are and have been compensated for. When someone pays you for your time, you feel valued and part of a community. This project hopes to create community by valuing being Black.

How do you feel about white people consuming something that is not for them?

Marin: That’s already happening. With or without permission, I am being consumed every day. At least I have some agency in this transaction.

Can you talk more about the gallery experience?

Marin: Not really. If people think they know something, they won’t be interested to find out what they don’t know. Let’s just compare it to dipping a tea bag into hot water. You’ll be able to steep yourself in the Black Imagination.

Can people keep sending submissions during the run of the project?

Sims: We are still accepting submissions online. The first batch of submissions was huge. We had at least a hundred responses, from all over Washington and as far away as Belize and New Zealand.

Marin: Some people had anxiety attacks reading the questions. When Black people are confronted with a question like how do you heal yourself and panic, that says something about the Black imagination in America. It’s sad we don’t have more time and space to think about these things.

Sims: I’m from Seattle, so I have a special brand of hate for this city due to the mass erasure that happens when you are a Black womxn in Seattle. People give zero fucks about how safe you are, or whether or not you have community. You cease to be a whole being here.

Marin: I allow myself to go to brown countries whenever possible. There’s a cultural oppression in Seattle that is whiteness. Making a place for Black people to be joyful is in and of itself radical.

Natasha, you were catapulted to fame last year with your reparations.me project where people could “offset their privilege” by giving back. How do you look back on it?

Marin: I can’t, it’s still going. I’m still inundated with the reality of the discrepancies in how people live their lives. White people offer coupons for meals they get for free while someone says: “My partner died, I have to take care of three children and my electricity will be cut off.” It’s like, “Are you listening?”

Black Imagination is about listening. Maybe when someone hears the same thread through the stories of a six-year-old girl, a 40-year-old man and an incarcerated woman, we’ll become a bit more multi-dimensional, and that will make us safer. It’s a gateway to compassion.

Sims: Self-care is a delicate balance. How can we take care of one another to push this project forward and make sure this is not only self-care for us? We’re also holding a container and a safe space for a huge amount of Black womxn who don’t have that option.

Marin: Call it community care. Permission to belong in Seattle, for POC and especially Black womxn, can feel like a life-and-death situation.

Black Imagination: The States of The Matter opens at CORE on Jan. 4.