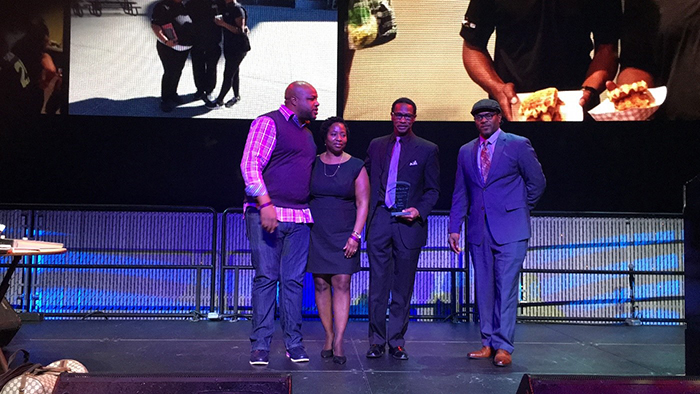 Founders of Ezell's Chicken receiving The Servant Of The People Award

Last Friday, community members and leaders came together at the Museum of Pop Culture to celebrate Black culture and discuss ways to build a strong economy for people of color. The event, called “Through the Eyes of Art,” has sold out every year since it began four years ago, so it was no surprise that 20 minutes before the program started, MoPop’s Sky Church was standing room only.

The evening opened with singer Josephine Howell receiving a standing ovation for her rendition of “Lift Every Voice.” Seattle native and CNN correspondent Angela Rye provided the keynote—a “benediction,” in her words—to hundreds of eager listeners. “This won’t be another speech,” she said, emphasizing the need for sustainable communities. “I’m hoping that we can leave here with action.” Artist and activist Dumi “Draze” Maraire, the organizer behind the event and its official MC, called out local media for not paying enough attention to communities of color across the city.

A special ceremony honored Lewis Rudd, Darnell Rudd and Faye Stephens, the co-founders of Ezell’s Chicken, with the Servant of the People Award for excellence in community service and advocacy. The trio originally opened their doors for business exactly 33 years earlier and have since gone on to national recognition.

Huge congrats to the founders of @Ezells_Chicken for receiving the Servant of the People Award at @MoPOPSeattle last week! pic.twitter.com/bduBFDvTDM

The night’s finale came as Seattle hip-hop progenitors Ghetto Chilldren reunited to perform for the first time in almost two decades. The group, comprising Derrick “Vitamin D” Brown and William “B-Self” Rider, presaged much of the city’s current crop of hip-hop luminaries, and their performance was a clinic in both the fundamentals and crucial details of the form.

As the night wrapped up and Black History Month officially began, Rye had a few words for the people of Seattle: “If you weren’t here, talk to someone that was!”

“If you weren’t here, talk to somebody that was!” -the badass @angela_rye at Through the Eyes of Art. Thx @DrazeExperience for hosting! pic.twitter.com/hAUu0shNtr