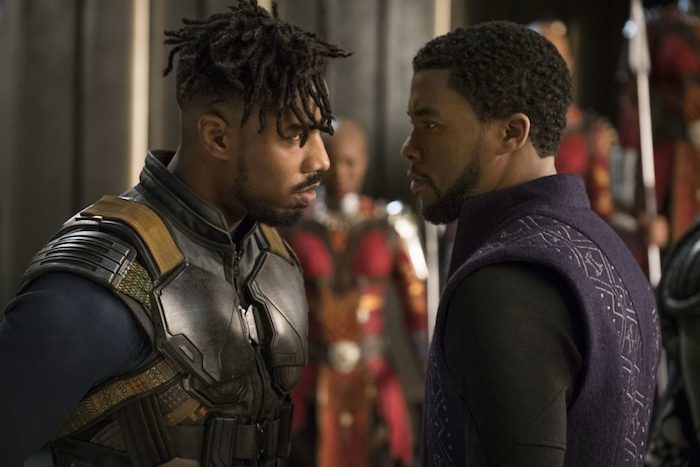 I had a hard time watching the film Black Panther without thinking of E. Franklin Frazier’s 1957 book The Black Bourgeoisie, a sociological study about the precarious position occupied by upwardly mobile American Blacks. Both the film’s substance and the spectacle surrounding it reminded me of Frazier’s framework, which argues that the political position of the Black middle class in the United States is defined by frustration.

Barred from owning the means to produce their own signifiers of success and self-isolated from the social base of underclass Blacks from which they emerged, the Black bourgeoisie, according to Frazier, celebrates token Black “firsts,” falls for self-aggrandizing Black leaders and is ultimately unable to challenge the structures of power that made their road to relative affluence so hard in the first place. Inasmuch as it places capitalism and white supremacy at the center of Black life, Frazier’s analysis is uncharitable and incomplete. Nevertheless, it captured a lasting set of power relationships that Black Panther reinforces. Director Ryan Coogler has made a beautifully frustrating film that fails to offer much more than the Black bourgeois politics described by Frazier, even as it accurately represents the achievements and the agony of that condition.

In Black Panther, inhabitants of a fictional African nation called Wakanda flourish thanks to an also-fictional rare metal called vibranium. Vibranium sustains everything from Wakandan transportation to healthcare, putting the country and its people light years ahead of the nations surrounding it in central Africa, and in an even more advanced place than the Western powers Wakanda lives in fear of offending. This drama of clandestine prosperity in a colonial context takes place on the African continent, but its parallels to the plight of Black America are unmistakable. When used as a weapon in the titular character’s superhero suit, vibranium embodies the central Black bourgeois political characteristic: In conflict, the metal internalizes and reflects the aggression of others but contains no generative power of its own.

Paradise is nearly lost in Wakanda due to a backstory rooted in faraway Oakland. An orphaned Wakandan nicknamed Killmonger arrives at the nation’s doorstep, angry that it has not addressed the plight of global capitalism’s dispossessed people of color. What ensues is a contest for power in which the flaws of Killmonger and Wakanda are revealed. The former is fueled by anger and poorly articulated ideology; the latter displays a conservative streak which reifies Frazier’s contention that until Black people everywhere are free, none anywhere can truly be.

The power struggle in Black Panther is fought—and fraught—with double-edged swords. We can criticize Killmonger for honing his mercenary ways as an American soldier who carried out orders in two illegal wars in Iraq and Afghanistan; but given the history of America’s neo-colonial intervention in Africa, can we forgive Wakandans for teaching a white CIA agent the secret Wakandan handshake and providing him with free healthcare? We can decry the misogynistic behavior of Killmonger, on display as he kills his own girlfriend and chokes an old woman; but shouldn’t we also begrudge Wakandans their indifference to those who were not so fortunate to be born on third base? The glories of Wakanda are portrayed in Black Panther, with Ruth Carter’s costuming providing perhaps the most gloriously pan-African visual display since the 1997 music video for Busta Rhymes’ “Put Your Hands Where My Eyes Could See.” Unfortunately, the downtrodden of the African diaspora are never so vividly depicted, leading Killmonger’s rage to seem baseless and irrational.

In the conservative world of Hollywood films—whose material links to the American defense establishment are at this point well documented—no white veteran would’ve been represented as unfavorably as Black Panther portrayed Killmonger. The unaccountability and aimless anger of Captain America was allowed to take center stage in the 2016 film Captain America: Civil War, but the centrist imperatives of the multi-billion-dollar Marvel franchise dictate that a minority insurgent—even one who served his country in combat—must die. The obvious racial politics at play in Black Panther sabotage the suspension of disbelief needed to make it through a superhero film without a deep sense of discomfort. If Wakanda were the utopia we deserve, it would be able to answer Killmonger’s questions about colonialism without having to kill him.

Because Killmonger is thrown out of the film’s right-leaning Overton Window, the spectacle surrounding Black Panther is more progressive than the film itself. One is reminded of the Obama era, where the campaigns of 2012 and especially 2008 were more transformative than much that was achieved in the actual administrations. The link between Black Panther and Barack is not insubstantial, with Ta-Nehisi Coates having written the Black Panther comics on which the film is based while scribing his 2017 Obama retrospective We Were Eight Years In Power. The shortcomings of Obama’s politics as the first Noble Peace Prize-winner with a kill-list cannot be discussed enough, but the enduring cultural value of the Obama years—iterated again recently with the release of Amy Sherald and Kehinde Wiley’s portraits of the Obamas—is undeniable. Similarly, the politics of Black Panther as a film validate Frazier’s conclusions in The Black Bourgeoisie, but the cultural spectacle surrounding the movie point to something better.

Black Panther has captured the Black political imagination. Nikkita Oliver and Seattle People’s Party martialed donations to send Seattle-area children to see the film, and organizers initiated a campaign to use the film to bolster Black voter turnout. It can be argued—as Luc Boltanski an Eve Chiapello did in the 2006 book The New Spirit of Capitalism—that a spectacle like Black Panther is mere representation, a diversion from more difficult questions about redistribution and access. But this criticism from the non-intersectional Left ignores the fact that capital exists on many planes: fiscal as well as symbolic, political and cultural. At the same time that we must criticize the upward redistribution of wealth under capitalism that plunged Black people into rates of poverty that exceed those seen at the height of the Jim Crow era, we must also celebrate the downward redistribution of cultural capital that elevates the voices and images of those who have been historically erased.

The son of Jamaican immigrants, I grew up believing that I was at least partly descended from the island’s Maroon colonies—a renegade cohort of runaway slaves who killed their British masters, fled to the surrounding hills and lived for centuries as a free, self-contained people. Throughout my teens and 20s, I never bothered to verify the veracity of this genetic claim, staked no doubt by adolescent ears that willfully misheard one of my dad’s many lectures about Black self-determination. The literal truth of this probably-imagined heritage was less important than its fictive value: the illusion that it’s possible to save oneself from white supremacy while remaining aloof from the issues of those who don’t have the same revolutionary initiative.

As I’ve aged into my 30s, I’ve seen that the way I wielded this fantasy subverted the very principle I claimed to uphold: Black cultural and political autonomy under a system built to break it. There’s no solidarity worth keeping if it doesn’t extend to everyone in need of it. We can do better than Wakanda. In fact, many of us already are.