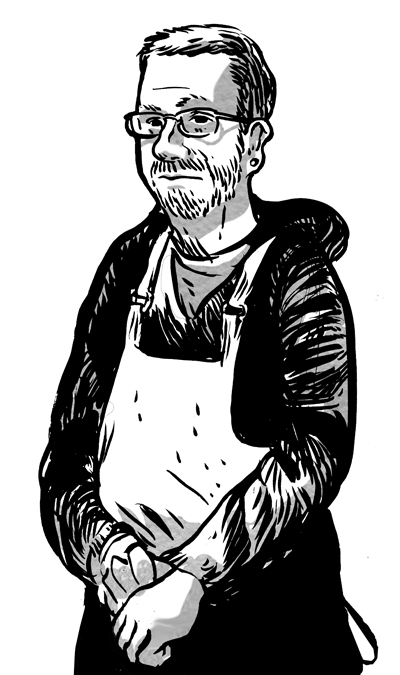 In late January a website called Bitter Barista appeared suddenly and swiftly gained an audience with the shot-pulling set. Operated by a clandestine Seattle barista, the site delivered humorous tweets about coffee shop customers that often turned dark and disparaging. After one week, the site had accrued an enthusiastic (and quickly growing) fanbase. Two weeks in, the Bitter Barista was outed as Matt Watson, a hip-hop artist and employee of All City Coffee in Georgetown. Shortly after that, he was fired. Then the media deluge began. Yesterday, when I met with Watson for a cup of coffee, he was on the front page of The Seattle Times. A few hours later he was interviewed by a camera crew from Good Morning America.

Are you comfortable with the amount of attention you’re getting? I’m not entirely comfortable with it. I’m a rapper by trade, so I’d much rather get attention through that. It is weird to call my dad and say, “I’m on the front page of the Times… for getting fired.”

How did this start? Was there one customer that sent you over the edge? It wasn’t my idea to make the site, actually. I started tweeting when Twitter started, about five years ago, just to stay in the music scene. I would sporadically complain about work through my personal account. Then two weeks ago one of my friends who enjoyed reading those tweets put together the Bitter Barista website, which aggregated all those past posts about my work.

So you weren’t trying to be incognito in the beginning? No. But all the tweets were general and very few of them actually happened the way they were tweeted. They were pretty hyperbolic and humorous. I took creative liberties.

Was there a moment where this became a significant creative outlet for you? About two years into it, I got retweeted by this account called Angry Baristas, which I think does a far better job at the thing that I’m doing. We went back and forth. It was almost like a rap battle.

The hip-hop you make as Spekulation is very earnest. Given the attention you’re getting for Bitter Barista and the attention you would like to get for your music, why don’t you just rap in a more satirical voice? I would never do that. The hip-hop thing for me, that is entirely me. A lot of the humor, initially, with the Bitter Barista posts, came from that juxtaposition of these outlandish things coming from someone who is kind of shy and quiet. It’s just totally a different character.

I’ve seen you defend this as satire. What, exactly are you satirizing? I’m satirizing the conversation that takes place between baristas when they aren’t making drinks. I’m just taking that to a hyperbolic level.

So the satire is directed at the barista, not the customer. Yeah. It’s an in-joke. This was never supposed to get to the customer.

Do you understand why you got canned? Oh, yeah. Fully. As stupid as it sounds, I stand by their decision 100 percent. Once their name got dragged into it, it seemed pretty reasonable that the relationship couldn’t continue.

You were a philosophy major in college. In the study of philosophy, the coffee shop has great importance as a safe space for people to discuss ideas. Don’t you feel like you’ve created an unsafe space for your customers? To a degree. The barista’s role is to build that safe space, but we’re not always included in it. I’m not really into the act—the retail-face theatre of customer service—but I’m excited to connect with people on a personal level and talk about real things. But some people treat service workers like vending machines. And it’s frustrating.

Do you think you will regret doing this? Oh, yeah. I don’t right now, but every single door to regret right now is wide open. The site is doing well, and it’s a good outlet for me to write. But all that I’m thinking is, how am I going to regret this a year from now? Or two weeks from now when my rent is due and I have no way to pay it?