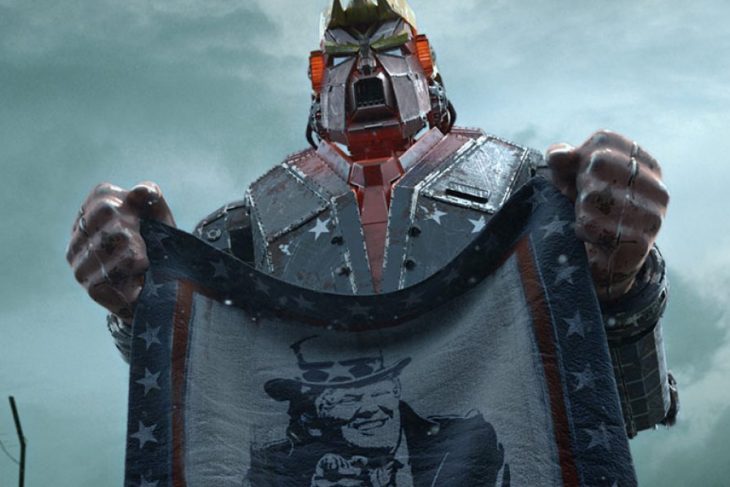 The annual Science Fiction and Fantasy Short Film Festival (SFFSFF) never fails to bring in dedicated genre fans, and the 13th edition of the fest, co-presented by MoPOP and SIFF, is no exception. No wonder the official festival, screening in the larger-than-life environs of the Cinerama this Saturday, March 24, handily sold out over a week ago. Tickets still remain for an encore screening of the entire presentation at the SIFF Cinema Uptown on Sunday, March 25.

Here’s a rundown of the highlights from what could be SFFSFF’s strongest roster of shorts in its history.

Big Screen Beautiful
Science fiction and fantasy often deliver visuals on an epic scale, so seeing some of the program’s most visually ambitious shorts on a big screen is an opportunity well worth savoring.

Adam Stern’s FTL may be a formula space exploration opus, but Stern and company deliver some truly dazzling special effects that help paint the emotions on display in broad, exhilarating strokes. The very sharp GEAR, meantime, presents its story of an adolescent pickpocket and her robot compadre amidst a well-realized futuristic backdrop. After We Have Left Our Homes kinda plays like a dystopian Benetton ad at points, but its heart is in the right place, and it sports some rich black-and-white style and impressive scale.

Charming and All-Ages
SFFSFF never lacks for quality family-friendly short subjects, and 2018’s crop follows suit. Fulfilament is a charming animated fable that turns the generation of a single thought into a mini-Pixar-level journey. Israeli director Yoni Salmon’s playful Niggun employs a Tintin-informed cel animation style to depict the adventures of a father and son searching for a mythic planet called Earth. Finally, the stunning The Sea is Blue utilizes a seamless combination of stop-motion animation and CGI to spin an exquisite portable fairy tale about—yes—why the sea is blue.

Fantastically Funny
Which came first, the chicken or the egg? The British short Time Chicken, an open claymation love letter to Nick Park’s Aardman Animation classics (Wallace and Gromit, Chicken Run) serves up its own wonderfully daft theory. And if you’ve ever wondered how the Power Rangers and the Powerpuff Girls would play if you mashed them up with sick-joke relish, the animated Ghost Squad provides the unexpectedly hilarious answer.

But the Uruguayan/Mexican M.A.M.O.N. (Monitor Against Mexicans Over Nationwide) trumps them all in the belly-laugh category—literally. Director Ale Damiani deals out a fever dream involving a giant Donald Trump robot wreaking havoc on Mexico with viciously sharp satiric bite. And the short’s impressive visuals should look terrific on a big screen in their own right.

WTF
You can’t get a better medium for batshit nuts than sci-fi. Among SFFSFF’s most bizarre entries is Dylan Allen’s The Privates, which draws its initial inspiration from the Nashville indie band of the same name, but the engagingly weird end result plays like Firestarter by way of an indie-rock Buckaroo Banzai sensibility.

Voyage of the Galactic Space Dangler, however, takes the LSD-dosed cake. Stephen W. Martin’s mini-movie is so unrepentantly strange that divulging the presence of an astronaut, a doe-eyed yeti creature that urinates milk, and a caveman does nothing to spoil its baffling, goofy spell.

Best of the Fest
Amongst the very strong pack of entries in SFFSFF 2018’s lineup, three stand out for me.

Hometown bias be damned, Seattle-based director James Allen Smith’s Haskell, a fable about a man able to intermittently bend time, is rife with emotional pull and fronted with weary, affecting authority by actor Mark Kelly in the title role. Meanwhile, Jiminy, a French short, posits a future in which humans augment their psyches and motor skills with nanotechnology. It’s a vision wrought by director Arthur Mólard with confidence and a singular sense of European artistry.

Finally, Stephen W. Martin’s wonderful Dead Hearts follows the romance between a mortician’s son and the kung-fu-fighting blind girl he falls in love with, over the course of several decades. Its laundry list of disparate elements (think Tim Burton-esque visual sensibility joined with Harold and Maude and Dawn of the Dead) made me laugh, genuinely touched me, and—yes—awakened my dead heart.

Tickets for the Sunday, March 25 encore presentation of the Science Fiction and Fantasy Short Film Festival at the SIFF Cinema Uptown can be purchased here.