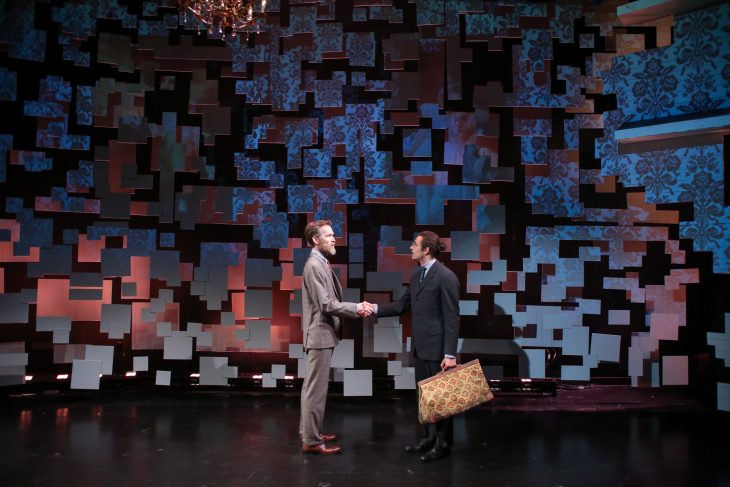 If you were told that in the near future, 80 percent of the world’s population would be working or attending school online, how surprised would you be? Jennifer Haley’s play The Nether is terrifying not because Haley has written a work of outlandish horror, but because she’s created a world so close to our own that the production now running at 12th Avenue Arts will—and should—make your blood run cold. To build this new world, Haley follows the deepest, darkest, scariest aspects of our technology—and by extension, ourselves—to a logical, stomach-churning conclusion.

Inside a cold, futuristically lit interrogation room, police detective Morris (Pilar O’Connell) lays into a man in a suit, called Sims (James Weidman), the picture of middle-class respectability. “What can be gained by spending so much time in a place that isn’t real?” Morris asks, derision dripping from her words. “Just because it’s virtual doesn’t mean it isn’t real,” is Sims measured reply, an answer to Morris’ insinuation that his 14 hours spent in the Nether every day are an abdication of real life. “As the Nether becomes our contextual framework for being, don’t you think it’s a bit out of date to say it isn’t real?”

Morris’s problem isn’t with the Nether, the next iteration of the internet. Her problem is with Sims’ particular corner of it. As the interrogation room goes black, warm light comes up on the façade of a Victorian house stage left, and an antique wallpaper pattern creeps onto the irregular white squares that comprise much of the stage’s backdrop, a larger-than-life simulacrum of pixelation (lighting by Ryan Dunn, scenic and projection design by Tristan Roberson).

Here we are in the Hideaway, a realm within the Nether full of chirping birds, giggling children and swaying birch trees, the latter a natural wonder that no longer exists in the real world. Here, Sims is called Papa, creator of the Hideaway and enabler of those pursuing horrific impulses, including himself. In the Hideaway, people can, via their avatars, do unspeakable things to willing children, both sexual and violent in nature (in fact, violence is encouraged to prevent clients from getting too attached).

The object of Papa’s affection is a bubbly girl called Iris (the gifted young Gabriella O’Fallon), who soon becomes innocent inamorata to a Hideaway newcomer called Mr. Woodnut (Kevin Kelly). Back in the interrogation room, Morris pumps an older man named Doyle (Steven Sterne) for information on the Hideaway, a place for which he is prepared to give up his corporeal self and live as a shade, a body on life support connected constantly to the Nether. Haley’s script is dense and deftly woven, revealing through the subtlest of hints who might really be who, how the digital world intersects with terra firma, the fine line between secrets and lies, and Morris’s personal reasons for pursuing justice.

Bobbin Ramsey, certainly a director to watch in town, helms Washington Ensemble Theatre’s production of this excellent play, a thought experiment that goes beyond a single issue and into a story of the dark, debatable corners of modern morality. Unfortunately, some technical limitations got in the way of the telling; the clunky physical addition and subtraction of set pieces every time we go to and from the Nether is an inelegant solution that highlights the digital aspect of the Hideaway over its transportive seduction, an unreality so real that people are giving up their lives for it. The Hideaway should be so enchanting that we too wish we could stay forever. Without that allure, it’s easy to feel as an audience like we have the moral high ground, and what Haley has done so brilliantly in her writing is take away the high ground entirely—we’re all just free-floating in the Nether, our moral compasses spinning in unfamiliar gravity.

“How can you, in good conscience, infect people with this content?” Morris asks Sims. To Sims’ mind, where is the problem? If the Hideaway prevents people from hurting real children, isn’t that a good thing? If the people behind the digital children are actually adults, where is the crime? If no physical body is involved, where is the harm?

In some ways, Sims isn’t wrong. But he’s also so, so wrong it makes your skin crawl. After all, people like Doyle are also coming to the Hideaway for love and interpersonal connection, and if they form caring, meaningful relationships—isn’t that real? And if that’s real, might people who experience the Hideaway feel empowered to enact their horrible actions IRL? Or is this just the latest installment of the “violent video games make people violent” argument?

The Nether punctures the fantasy that we’re above this fray, that we know the easy, obvious and correct answer to any of these questions. Ultimately, this well-constructed production seems to have an opinion on the matter, which makes for a less interesting audience experience, though that imbalance is due in part to unevenness in the performances. The fact that it’s so hard to pick apart what and who is good or bad, and why, is what makes The Nether such a compelling play for our time, a signal flare that these questions need answers sooner than later.

The Nether runs through May 18