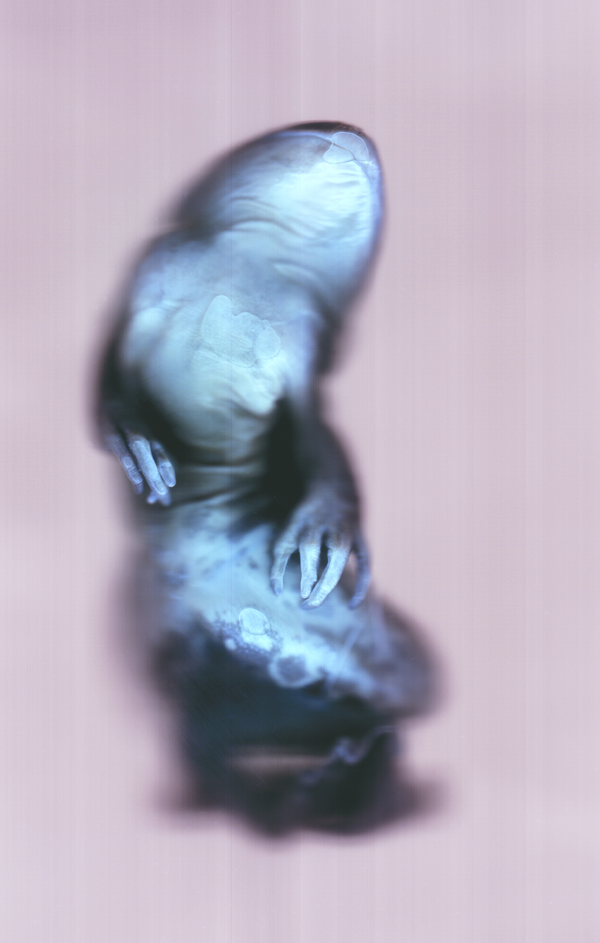 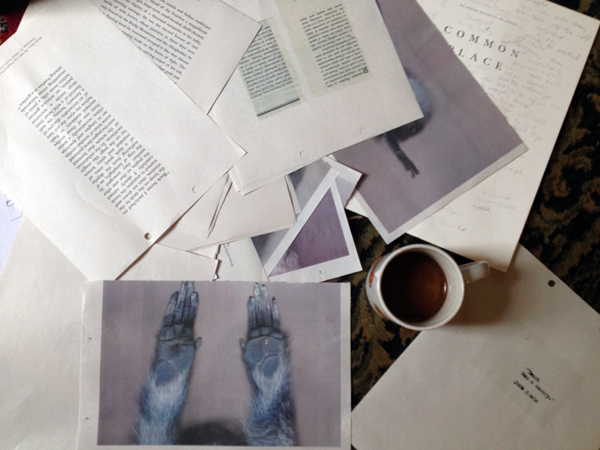 Ann Hamilton’s the common S E N S E opened at the Henry last weekend. Hamilton is a world-famous artist who’s nailed the art of thoughtful, immersive installations. She wants you to use more than just your eyes. You’re meant to handle, to touch. The success of her work depends on the activation of the viewer. Like her 2012 piece the event of a thread, where she installed 42 swings in the massive Park Avenue Armory. Visitors hopped on the swings, which were attached by said “threads” to a giant swath of eggshell white cloth. As people played, the cloth billowed from floor to ceiling, gently tugged and oscillated by the movement of swings and bodies in the space.

It’s good news for Seattle that she’s the artist who got a million dollar (!) commission to make something for our revamped waterfront. Which is to say, you’ll be hearing more about her in the years to come. But for the moment, Hamilton’s contribution to Seattle is a more private affair than whatever will go up in the shadow of the Great Wheel.

For this exhibit, Hamilton doesn’t waste any time plunging the readers into a choose-your-own-adventure type art experience. Right out the gate, you’re given a cream colored paper folder. There’s a pocket inside for collecting materials. It’s inscribed READERS READING READERS—A COMMON PLACE. Also inside is a slip of paper explaining what a “commonplace book” is (also the verb “commonplacing”): it’s the act of collecting inspiring or meaningful snippets of literature and copying them by hand into a small book. Like a Pinterest of the 17th century. This pastime continued through the early 20th century (as in Kate Lebo’s A Commonplace Book of Pie, which we covered in Nov. ’13).

Hamilton uses the idea of commonplacing as a literal and symbolic launching point for the common S E N S E, which is itself a humongous, walk-in cabinet of curiosities—a commonplace book sprung to life in the round. The exhibit comprises fragments from a number of local sources: the permanent collections at the Burke Museum of Natural History, the Henry and UW Special Collections Library, all of which Hamilton researched extensively. The items she pulled for the exhibit include children’s alphabet books, 200-year-old jigsaw puzzles and garments like gloves, coats and parkas stitched from the impossibly plush skins of small animals made by indigenous people from the region. These are assembled under glass in large, very traditional vitrines, or curtained off in little cubicles for close viewing. Another source is way more au courant: Hamilton created a Tumblr about six weeks ago and requested strangers to upload anecdotal material about touch. She picked her favorite submissions and printed them on uniform pages of newsprint presented throughout the exhibit. You’re allowed to tear them off and put them in your own commonplace folder. 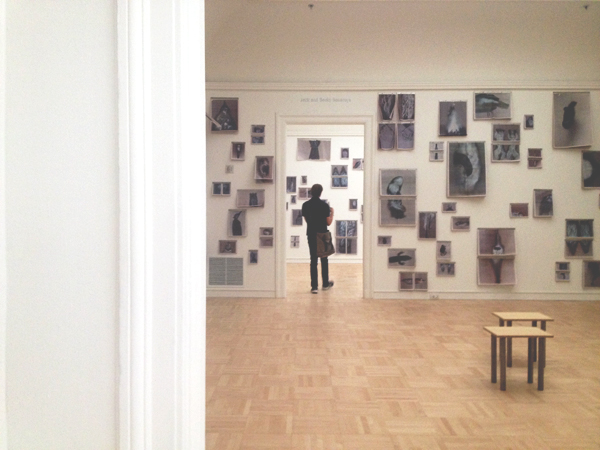 You’re also encouraged to take the art off the walls in some galleries. One of the exhibit’s breathtaking visual crescendos are the two rooms staggered floor to ceiling with images of animals, printed on tissue-thin newsprint.

As Hamilton sifted through the Burke Museum’s collection, she scanned the bodies of two hundred preserved specimens on a clunky, old, large-format scanner she brought with her. Pressed against the cold, mechanical slab of glass, the details that come into focus are uncanny and vibrant: the slender paws of primates creased with lifelines; claws and tapering talons that catch glints of passing light; the tips of bats’ wings; the radiant softness of underbellies; the keratin toughness of hooves; the silvery opalescence of a dead eye. Just like Audubon but a hell of a lot more morbid.

(Speaking of Audubon, this isn’t the first time Hamilton filled the Henry with animals. In 1992 she occupied one gallery with 200 live canaries, much to the consternation of some animal lovers.) 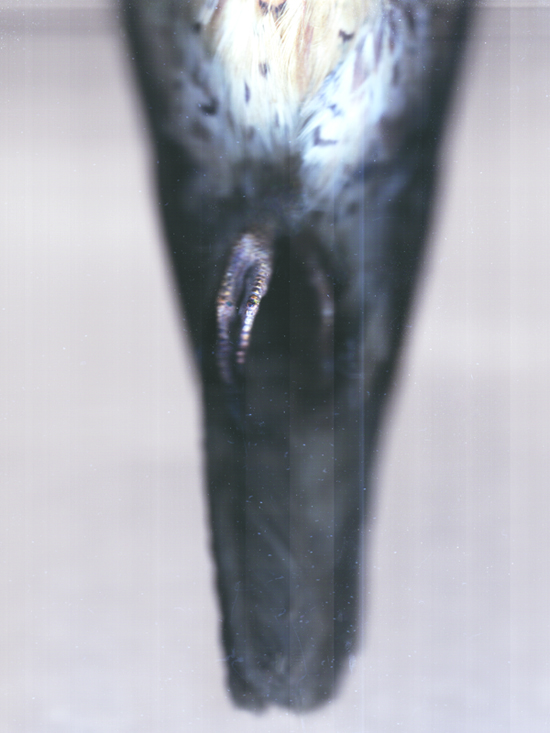 The tone in these galleries is hallowed, but not without a small ballet of orchestrated movements taking place. As you tear fragments from the wall and tuck them in your folder, chances are you’ll come across a “reader/scribe” seated on a stool, reading aloud quietly to one of the images. It may sound corny (It did to me!), but the readers are genuinely entranced, each huddled over a copy of J. A. Baker’s The Peregrine—Hamilton’s required reading. These volunteers have agreed to spend a predetermined amount time with an image and the book, reading in silence. When a scribe finds a particularly poignant passage, she copies the text by hand into a blank book while reading it aloud. Elsewhere, the quiet gallery suddenly comes alive with the tone of a small bell ringing, followed by the voice of someone singing. It’s a UW choral student who has been solicited by Hamilton to come and serenade the digitized morgue. 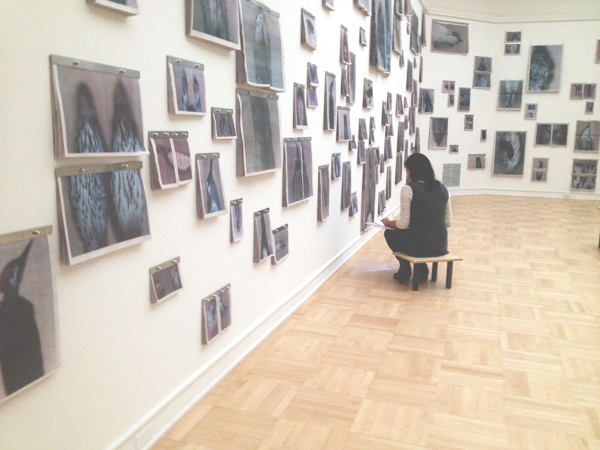 The installation in the lower-level gallery is steps away from the chilling softness of organic things and becomes, for a moment, a mechanized playground of music-making whirligigs. The skylights in the space, covered for the past decade, have been unveiled. Under the bright flood of light, 20 mechanical bullroarers run up and down metal pipes anchored from floor to ceiling. They churn upwards silently, laboriously. Once high enough, they pause, then slip back to earth. As they fall, their plexiglass rudders rotate, flatten out, then vibrate and flutter against the air, making a low, rumbling howl. Sometimes clusters of them descend at a time and the gallery fills with a slow-building, collective roar. At the moment, the machines are activated manually by arbitrary algorithms; eventually they’ll be triggered by the movement of crowds passing outside the entrance to the Henry, where Juan Pampin and James Coupe’s Sanctum installation—modeled after surveillance technology—is already wired to track the comings and goings of passersby. 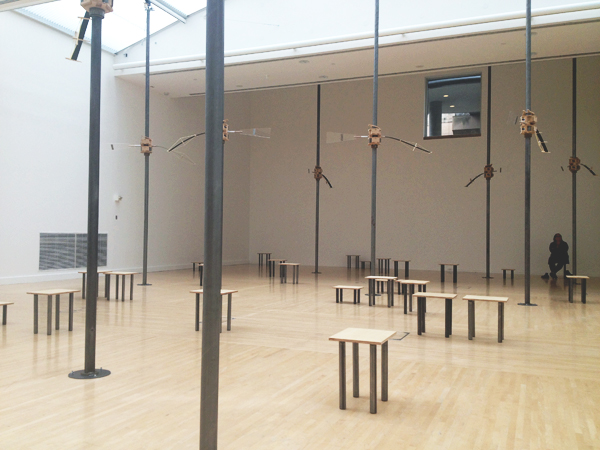 On the periphery of the room is more ephemera harvested from Tumblr. The amount of it is overwhelming. By now, if you’ve been taking your time with the exhibit, your commonplace book is a thick stash of materials pilfered or gleaned, depending on how you look at it.

This rapid consumption of texts and imagery is problematic. There’s a needling feeling that one’s taking contributes to the mindless, mechanized consumption of fragile things, to the destruction of the whole. Not to mention the tumblr has compressed a private exercise practiced over the course of a person’s literate life into a crowd-sourced info glut amassed in a mere six weeks. For the exhibit-goer, the experience is even more compressed: It turns into moments, probably an hour, tops, of grazing, grabbing, hoarding. Of course, what’s nice is that what remains is something solid that will stay in my home, tucked away, turning up from time to time.

The Henry won’t replenish the Tumblr-based texts; over time, they’ll dwindle. Likewise, over time the number of animals remaining on the walls will diminish. There’s only one element in the show that will slowly accumulate rather than lessen: On the way out of the gallery, visitors are invited to have their photo taken behind a semi-translucent sheet of plastic. What isn’t pressed against the material falls hazily out of focus. The human animal—the hands, nails, cheeks, hair, fibers of clothing captured in the flash—comes fleetingly into focus. These images are printed on newsprint and added to a wall in a gallery downstairs.

It’s a final gesture that makes a tidy connective tissue enveloping the whole of the exhibit. If the parts are a little prim—a little Country Diary of an Edwardian Lady—the sum amounts to a vaguely spiritual experience. Or at least a visceral one cloaked in the dust of academia and the feverish aura of contemporary social media. The empathy with the departed is real. So is the sense we have connected—via Tumblr, via skins, via scans—to our histories, to our crimes, to so many faceless strangers. Hamilton’s exhibit is a complicated game of give and take.