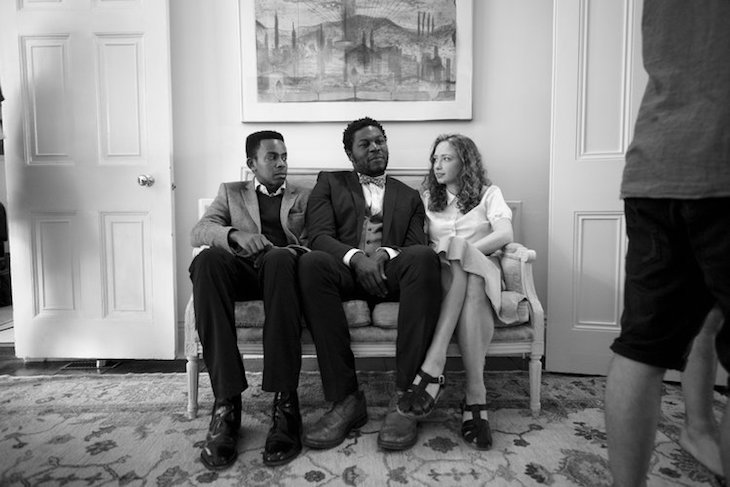 The 2018 Local Sightings Film Festival launches at the Northwest Film Forum tomorrow night, and as is customary, there’s an embarrassment of regionally sourced riches to choose from. From a bumper crop of documentaries to a high-quality itinerary of fictional narrative features to a bevy of workshops and special presentations, there’s plenty worth exploring during the festival’s eight-day run. To streamline your scheduling process, here’s a rundown of Local Sightings 2018’s most unmissable high points.

The Future Classic
Forgotten Man (Sept. 25), Vancouver B.C.-based writer/director Arran Shearing’s assured feature debut is a beguiling little love story about a struggling actor (Obi Abili) at a theater company for the homeless and his romance with an affluent American woman (Eleanor McLoughlin) in working-class London. Sometimes its points about class and income disparity come on a little strong, but it’s impossible to dispute Shearing’s knack for warm, nuanced characters, his wry sense of humor and the extremely charming leads (Abili and McLoughlin are both pitch-perfect). Kudos to cinematographer Ryan Petey, whose artful black-and-white photography subtly echoes Francois Truffaut and Golden-Age Hollywood in equal measure.

The Slow-Burn Nail-Biter
Local Sightings usually showcases at least one quality thriller every year. The genre entry this year is Once There was a Winter (Sept. 22), in which a welder and his new female co-worker make a visit to the former’s brother’s house, where things gradually descend from slightly off to chilling. Writer/director Ana Valine’s mesmerizing film makes the snow-blanketed Vancouver wilderness as foreboding as it is beautiful. Valine plays the slowly building tension like a Stradivarius, and all four principals—especially Juan Riedinger’s charismatic loose-cannon antagonist—couldn’t be better.

The Unlikely Music Movie
It doesn’t matter that Portland-based writer/director Mahalia Cohen’s The Last Hot Lick (Sept. 28) treads a pretty familiar path, as a struggling musician meets a gifted but troubled singer who he thinks could be his ticket out of oblivion. What makes it special are its lead actors and its ambling but bracing acknowledgment of the passage of time. Jaime Leopold, the 69-year-old former bass player for Americana-swing band Dan Hicks and his Hot Licks, gives an unaffected, sweet performance as singer/songwriter Jack Willits, and Jennifer Smieja lends enigmatic presence (and, yes, a great singing voice) to her work as Willits’ muse.

The Best of the Docs
Stuart Eagon’s Essays of a City (Sept. 22) paints an impressionistic portrait of Portland’s ongoing transformation that segues into some powerful first-hand accounts by the city’s homeless. The excellent Ramps to Nowhere (Sept. 26) provides an absorbing look at the activist efforts that saved largely African American communities from division and destruction by the ill-fated R.H. Thompson Expressway and Bay Highway projects during the 1960s and ‘70s.

The most powerful doc on the Local Sightings roster may be Chronic Means Forever (Sept. 29), from the unlikely environs of rural Spanaway, Wash. Writer/director/editor Kadazia Allen-Perry offers an unflinching view of her life as a sufferer of cystic fibrosis, a chronic disease that impedes and eventually destroys lung function. She gives an unflinching account of how the disease has impacted her, allowing herself to be seen at her metaphoric and physical worst, and never holding back when it comes to her extreme frustration and despondency over the hand dealt her by fate. It’s a harrowing journey, but Allen-Perry’s anger, vulnerability, wellsprings of courage and activist’s spirit are riveting to watch.

The Peeks into Seattle’s Past
Two archival screenings surface at Local Sightings this year, each accompanied by live special guests:

The frothy Elvis Presley vehicle It Happened at the World’s Fair (Sept. 25) sports some postcard-perfect glimpses of the city in the early ‘60s during the World’s Fair. It’s accompanied by live commentary from Lindy West, Ahamefule Oluo and Charles Mudede.

One of the great paranoid thrillers of the 1970s, Alan J. Pakula’s The Parallax View (Sept. 28), set in Seattle, plays with an introductory musical interlude by Evening Star, a musical collective spearheaded by Weather Theatre frontman John Massoni and The Process’s Jonathan Marlow.