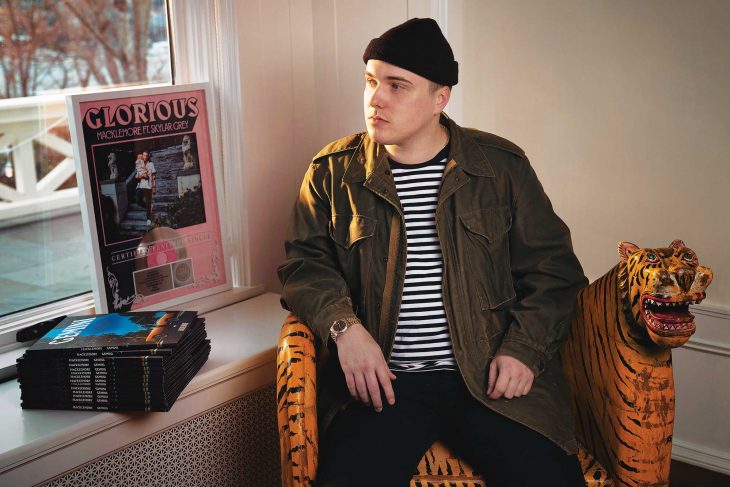 Inside Macklemore’s Capitol Hill home, Tyler Dopps ponders the platinum record for “Glorious,” the lead single from Gemini that he co-wrote. Photo by Macklemore

The year: 2015. Ryan Lewis and I were coming off the final wave of touring for our album The Heist and were finally getting back into the studio after a three-year hiatus that felt like a decade. Ryan was getting very organized in the studio that we’d just built right off Pier 70, on the eastern side of the railroad tracks that intersect the Seattle waterfront. We were gearing up for the month of September, which Ryan had blocked out solely to record musicians. He was accumulating all sorts: flute players, harp players, bassists, guitarists, piano players, drummers. He even tracked down Spoonman. Along with this random array of people, Ryan also found a kid to help him dig for samples. His name was Tyler Dopps.

Google his name and you’ll find links to a bunch of songs that he produced on my last album. But his face is missing from Google images. His Instagram isn’t even that lit. You can barely find a picture of the man anywhere. So who is Tyler Dopps? I asked myself that question a lot when he was suddenly in our studio every day, slouching on our brown Chesterfield sofa with a posture only a producer could own. So I asked him.

Tyler Matthew Dopps was born in Port Orchard, Wash. He started playing guitar at the tender age of nine and was heavily influenced by rock and death metal (what kind of nine-year-old’s genre of choice is death metal?). In eighth grade he joined his first band and during high school fluctuated between guitar, bass and drums. As his senior year approached he realized that death metal was impacting his spirit negatively and he started making hip-hop beats. He also has perfect pitch.

Tyler fit into our studio environment seamlessly. He was quiet at first and read neutral on the positive/negative scale of presence in the room. Ryan would send Tyler to record stores to have him listen to old albums. His job was to look for loops to sample, bring them back to the studio and organize said samples by key, BPM and instrumentation. As the months accumulated, so did the samples, and soon we had a massive archive to comb through. His job was essentially complete, though we never did end up using any of the samples. But Ryan and I liked having Tyler around in the studio to help with things—getting coffee, ordering food, driving RVs for video shoots, cleaning up—so we hired him to be Ryan’s assistant.

We were halfway through making our sophomore album, This Unruly Mess I’ve Made, and I was at a creative standstill. Ryan said we needed to get out of Seattle and record in the woods, and I agreed. So we packed up a squad and our gear and headed into the mountains of Idaho to make a rap album. As the weeks stacked up, Tyler emerged as the chef of the group, partly because he was the only one who tried and partly because he used massive amounts of salt and butter in whatever he cooked. Over the following two months he mastered the art of pan-searing steaks. But at this point, Tyler was so busy cooking, cleaning and keeping us caffeinated that he had very little time to focus on making music.

Ryan and I finally finished the album in early 2016, said goodbye to our families and headed out on the highways of America to pursue a sophomore success story. Tyler, being Ryan’s assistant, came along for the ride. Turns out the road life looks a lot better in 15-second Instagram videos than it does at 5:30 a.m. in a bus bunk when you can’t sleep and have debilitating acid reflux from the pizza you ate three hours earlier. It’s a lot of cold green rooms, shitty showers and waiting around for showtime.

The road life was wearing on Tyler and midway through the U.S. portion of our tour he quit. He wanted to hone in on his craft and cited his passion for producing as the reason for his departure. I supported his decision but was bummed that a key player in our small circle—someone I’d become close with—was leaving the team.

A lot happened in the months that followed. Tyler went on to work with Shelton Harris, a Seattle rapper, and the two made a fire EP in just four months. I remember hearing it for the first time and being impressed by the fullness of Tyler’s production. I was especially wowed because for the 18 months prior, I hadn’t heard him work on his own music once.

This was all happening around the time that Ryan and I decided to take a break from working with each other. It was a difficult season for me, one accompanied by a lot of fear. I’d worked with Ryan exclusively for almost a decade. I couldn’t imagine going to LA and bouncing around studios with producers I didn’t know or trust creatively. I wanted to be in Seattle around my family, with people I had personal relationships with. The first person I called was Tyler.

I was surprised I hadn’t thought of it sooner. Tyler has the perfect demeanor for the recording environment. He’s sarcastic and witty but knows when to turn it off and treat the studio like a job. When he opens up, he possesses a vulnerability and honesty that brings out the same attributes in those around him. He’s someone who listens more than he talks, but when he talks people pay attention. As I grow older, and the hip-hop world seems to be getting younger, he’s a resource to me thanks to his sense of pop culture that I no longer have the drive to keep up with.

I initially thought Tyler could be my engineer. Since his departure, he’d become fluent in Pro-Tools and done a stint in Atlanta engineering for Waka Flocka Flame. I knew he could put in long hours, handle the secondhand weed smoke of whatever guest rappers I’d invite to the crib, and was more than capable of directing sessions. What I didn’t know was that Tyler’s production skills would drastically shape the sound and character of my first solo album in 12 years.

At the beginning of November 2016, I called a meeting in my basement. I assembled a team that consisted of longtime friend, producer and collaborator Budo, the hook and melody man XP and the young gun himself, Tyler Dopps. Our goal for the month was to record a song a day, no expectations and no judgment.

Budo took the lead as producer-general, banging out melodies and top lines on keys, guitar, bass, drums, synths and trumpet. A couple days later, I asked Tyler to try some drums on a piano part that Budo had laid down. In less than five minutes he made a slapper that went on to become “Marmalade” featuring Lil Yachty. From that point on it was studio magic, with Budo and Tyler working hand in hand to form a Jordan-Pippen relationship, alternating between who carried the ball up the court. With Budo’s instinct for melody, Tyler’s ability for crafting drums and my palate for sonic texture, I knew that we’d stumbled upon something special.

In the nine months that we recorded Gemini, I spent more time with Tyler than anyone else. We’d meet around noon and work until 3–4 a.m., often decompressing in the kitchen over bowls of Raisin Bran (I really fuck with Raisin Bran). When you’re with somebody in the studio every day, you develop a bond. You see them at their best and worst. You celebrate moments of triumph and creative breakthrough together and you support each other when the inevitable doubt seeps into the room. You become a sounding board for each other’s lives, processing relationships, dreams, car purchases and whether or not anyone is going to like the art you’re making. By August 2017 we were working around the clock to meet our deadline.

The end of making an album is usually 50 percent beautiful and 50 percent please remind me why we started this? It makes for some intense emotions. As you turn in final mixes and listen to the same songs over and over again, alternating between studio monitors and car stereos, you get nostalgic. Maybe it’s the sleep deprivation. Maybe it’s the countless hours of adjusting the minute details of sonic frequencies, knowing that once they’re mastered, these moments of audio will be frozen in time forever. Maybe it’s the delirium and excitement, looking forward to the clock striking 9 p.m. on a Thursday in the foreseeable future, when streaming services upload new music for the week.

The songs you’ve been working on end up feeling like children that you’ve raised since birth. You love them all the same but for different reasons. You’ve seen them through numerous stages. You’ve polished them up and prepared them the best you can. Raising these kids takes a village. The people you invite into your circle for the creation process have become your family and the journey that you’ve been on together is now tangible. The music that was once yours is now shared with the world and you’re not in control anymore.

It might’ve been one of those 4 a.m. mornings when Tyler was walking out the door and I yelled “See you at noon homie!” when it hit me: The dude that started out going on coffee runs had become one of the best producers I know and one of my closest friends.

Now he has production credits all over a gold-selling album, along with two platinum plaques hanging on his wall for songs off Gemini. He just completed a very dope EP with the Mayor of White Center, the soon-to-be-nationwide star Travis Thompson, and has multiple beats on the new Flatbush Zombies album. As I write this on the tour bus in Dublin, he’s the musical director of the Gemini World Tour. These accomplishments are beyond impressive for anyone, much less a 23-year-old.

But what impresses me most about Tyler is that he followed his intuition. He knew that the music he heard in his head deserved to be heard on speakers around the world. He left a job that wasn’t feeding his creativity and pursued his own path. And outside of the new Rolex, 2014 Volkswagen Jetta and the 40 shots of Hennessy he bought the entire tour crew last night, the man hasn’t changed a bit.

My only fear now is that once the rest of the rap game understands how good he is, I won’t get first pick on his beats. Hopefully me writing this story secures my spot for at least another year. It’s only a matter of time.