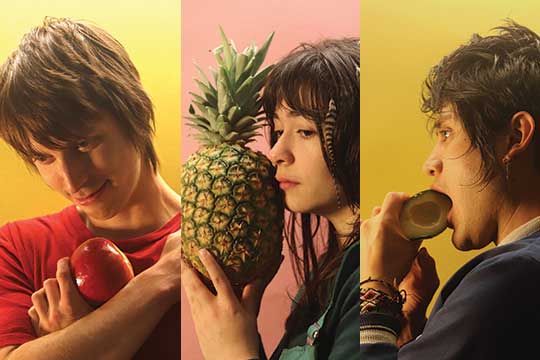 One song into Tres Leches’ set at DIY music fest Hoodstock last July, the PA system cut out. A hundred-some people packed the backyard of a house in the Central District and none of them could hear the band sing. Improvising, Tres Leches’ Zander Yates stepped off the stage, into the crowd, and began to strike the strings of his guitar. For the rest of the set, the members of Tres Leches—Yates, Alaia D’Alessandro and Ulises Mariscal, all multi-instrumentalist singers—took turns leaping to the ground to sing, snarl and scream face-to-face with their audience.

“They would either get uncomfortable and move away or get drawn in,” says D’Alessandro of the band’s gamble. “I think their reaction was to get drawn in.”

Not every band can forge unexpected intimacy from technical difficulties. But Tres Leches possess a rare combination of gifts: the courage to take risks and the openness to ride out the results together.

“Experimentation is very much the glue [of the group],” says Yates, who first played music with D’Alessandro at the Nova Project, an experimental public high school in the Central District. Mariscal joined after meeting D’Alessandro at a performance by Mexican electronica group Nortec Collective at Bumbershoot 2011. Though Mariscal had never played an instrument, D’Alessandro encouraged him to try drumming, leading to the formation of Tres Leches in 2014.

Now the trio trade roles constantly, transforming shows into games of bass-drums-guitar-theremin musical chairs and imbuing their recordings with vocal interplay and variety. On the bilingual new song “Nueva York,” from Tres Leches’ as-yet untitled debut LP, Yates growls through the second verse like Johnny Rotten. Just as his bark reaches its boiling point, the instruments fall out and D’Alessandro’s warm voice rises to meet the silence, offering a melody that sounds all the more joyful because of the contrast in vocal styles—the same way the sun shines brighter after rain.

Listening to Tres Leches is like watching an agile athlete evade defenders. Just when you think the band is boxed in, they find an opening: a dance-beat detour, double-time bridge, a trap-door ending. Guitar-driven and energetic, their music calls to mind the scrappy sound and spirit of nothing-is-off-limits punk bands like the Clash and Minutemen. Tres Leches is a DIY experiment gone very right.