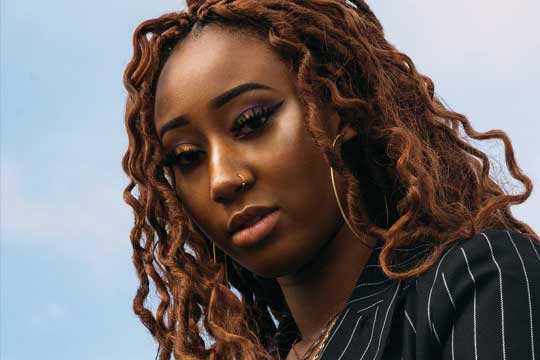 “Bloom is basically the story of how I fell in love,” says Paris Alexa Williams. The singer-songwriter—who performs under the name Parisalexa—recently released a debut EP that sounds like spring. Bloom’s lush vocal harmonies flow over breezy, warm boom-bap textures. Songs with titles like “Gardens,” “Leaves and Seasons,” and “Cross Pollinate” center lyrical themes of blossoming love and all the excitement and anxiety that come with it. It’s her debut release, but Bloom has a polished concision that sounds like the work of an experienced professional.

Williams began piecing her musical talents into a career in high school, where she went from writing songs in the bathroom while skipping class to attending the GRAMMY Camp songwriting program in Los Angeles. There she made connections with Warner Brothers and Atlantic Records and took on professional studio work “toplining” for other singers and producers. At the same time, she plunged herself into Seattle’s arts community, participating in the More Music at the Moore program her junior year and taking second place in the Sound Off! Competition as a senior, in the process meeting many of her current peers and collaborators like Travis Thompson, Romaro Franceswa, Samurai Del and DJ U Moore, one of Bloom’s two producers.

It was one of her LA work trips late last year that provoked Williams into her current mode.

“I came back and was drained from writing other people’s stories, so I was like, I’m gonna write my own story now,” she says. The story of Bloom unfolds over seven songs, starting from “Hole in the Ground,” an allegory about delving into the rabbit hole of a new relationship.

“I actually fell in love with my best friend of a long time,” Williams explains. After he confessed his feelings to her around this time last year, she says, they went all-in. Or as she sings it, “If I fall in, you gonna fall in, too.”

“Deadhead” confronts an old flame with news of the new relationship, arriving at the EP’s crux in the chorus: “I had to cut you off/so next year I can bloom.” “Leaves and Seasons” meditates on life changes and personal growth. Other songs explore the uncertainties of new love with a perspective that seems wise well beyond Williams’ 19 years and with a voice that’s equal parts power and finesse, all over smooth, multifaceted beats by producers Antero and U Moore.

Williams is already growing into her next release. She says Flexa, due in May, is an evolution away from Bloom, “a lot of summer vibes, a lot of turn-up type stuff.”