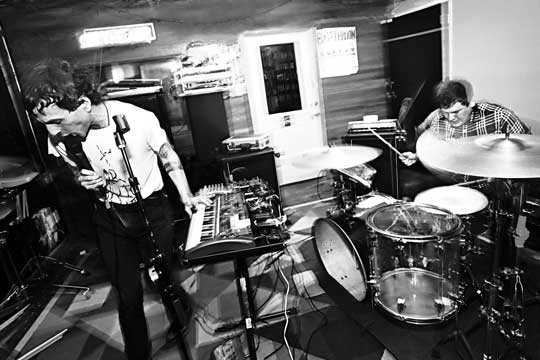 It’s dark outside, and needling cold. The bleak interior of the Black Lodge makes for an easy transition indoors, though the DIY venue’s cavernous void of a show room is comfortably warm and full of human life. Between songs, Myke Pelly compulsively tightens the head on his snare drum, ensuring the tension remains high. He exchanges glances across the small stage with Haunted Horses bandmate Colin Dawson, communicating in nods, as Dawson cues some rhythmic distortion on a mutant effects keyboard. Once Dawson has built the atmosphere to something like an ornate crosshatching of kindling, the two erupt in a fit of reverberating low-end fuzz, groaning death knell vocals and concussive percussion.

Haunted Horses isn’t afraid to leave live sets as brief, explosive statements, as they do tonight, executed with the same gross energy of many other sets twice as long. Their records are equally efficient at achieving their desired level of shred, and they continue this epinephric approach with their most recent burst, this month’s four-song Cold Medicine EP. The motif might be best described as post-dark—their music sounds like walking, or rather charging, into the light. Death was yesterday’s chore.

The EP opens with what sounds like chains dragging through an abandoned warehouse, then strained moaning and a drum beat like heavy footsteps. The title track and “The Banker” carry the bulk of the load, with Pelly’s thunderous drums matching Dawson’s grinding, industrial keyboard, which sounds alternately like a distorted Fender Rhodes piano and a demonic guitar. Once “Video Drone” brings the eight-minute suite to a close, you’re not sure if you made it out of the warehouse alive or if you’re wavering in the burning afterglow. The brevity of the release assures that it lands hard.

Haunted Horses isn’t a new band, but last year’s reunion produced a rejuvenated and streamlined (aka without a bassist) take on their post-punk horror-core. Like dark liquid bleeding from a jostled two-liter of Jolt, Dawson and Pelly surface with new music whenever the world’s pressures build to the point of rupture. For the past seven years, Haunted Horses has vocalized the unrest that colors the social climate though sheer force, providing an artistic outlet to expend angst and stretching comfort levels with their morbid imagery. Their on-again, off-again relationship with their art may test fans, but it suits their aggressive output; their sporadic nature makes each outburst feel more like a sincere act of catharsis.

Once a defiant undercurrent to the euphoric folk and blissful chillwave floating along the city’s surface, Haunted Horses has become a periodic reminder of Cascadia’s darker impulses. Each show and each release serve as a reprieve from—and a weapon against—the drudgery of daily life.