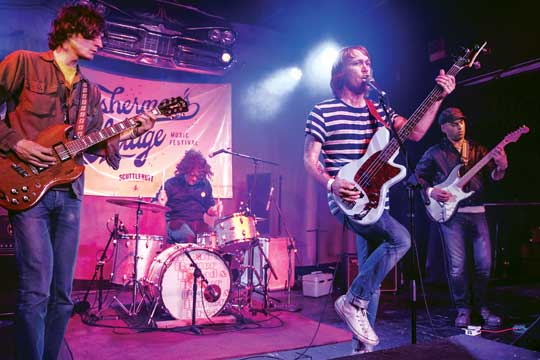 In the 18-plus years Mason Lowe has played in Seattle bands, he’s noticed an interesting correlation between the price of electric guitars and the general popularity of rock music. Ten years ago, Lowe couldn’t afford the apple of his eye, a white Fender Stratocaster. Today he could buy several. Not because he became a rich rock star, but because right now fewer musicians are trying to become one. That narrower playing field might be one reason why his current band—band number eight—is blowing up.

Bread & Butter play pitch-perfect, ’70s-inspired feel-good rock ’n’ roll. In 2018 it is, in a way, a niche. In a time when pop and hip-hop dominate mainstream culture, playing rock music seems once again an act of rebellion. Or at least an act of pure joy: On a balmy Saturday night in late March, B&B are capping their recent West Coast tour with a homecoming show at the Clock-Out Lounge surrounded by friends and family. The vibe inside the new Beacon Hill venue is appropriately warm and loose and affectionate. Later there will be impromptu line dancing in the pit and people in banana costumes on stage.

The members of Bread & Butter—Lowe on drums, Shane Herrell on vocals and bass, and Ryan Kraft and Lars Swenson on guitars—have seen enthusiasm for rock music ebb and flow over the years. B&B formed in 2015 and they believe the city is still a great place to be a rock band, especially once you begin to recognize the efforts of other dedicated musicians. “You see the same people for years and there’s a kinship that happens,” Herrell says. “You appreciate each other even if you don’t necessarily like their music.” Such kinship and appreciation are the building blocks of not only a scene but a way of life.

Swenson recalls a truism his grandmother told him when he was a kid: “If you play music, you’ll always have friends.” In her youth, if people wanted to hear music at home, someone had to know how to play the piano. Generations later, people still gather around music, as social groups still crave the communal concert experience. That’s the scene at the Clock-Out as B&B’s choogle-rocking brethren in Head Band are about to start the show.

With these guys, if there’s a place for recorded music, it’s on vinyl. Head Band’s sole release is a Coke-bottle-green 7” that came out earlier this year on San Diego-based Thrill Me Records. Described by the band as a “double A-side” (it literally has Side A and Side AA), it features a pair of big, hand-waving guitar-rock anthems, “Mountain Time” and “Blown Away,” quintessential songs that define the band’s sound. Bread & Butter finally made their BandCamp-released eponymous debut available in physical form in early 2017; the “butter yellow” vinyl sold out fast, but plain-old black is still available. RIYL: vintage Tom Petty, early Aerosmith, inexpensive beer and walking barefoot in the grass on a hot summer day.

Back at the Clock-Out, here’s Head Band charging through their opening set with Bread & Butter cheering them on from the floor. There’s Norberg loaning Swenson his guitar after Swenson broke a string during a solo. The dance floor in front of the stage swarms with friends and strangers dancing and carrying on. If this is a niche, it’s one pretty much anybody can fit into.