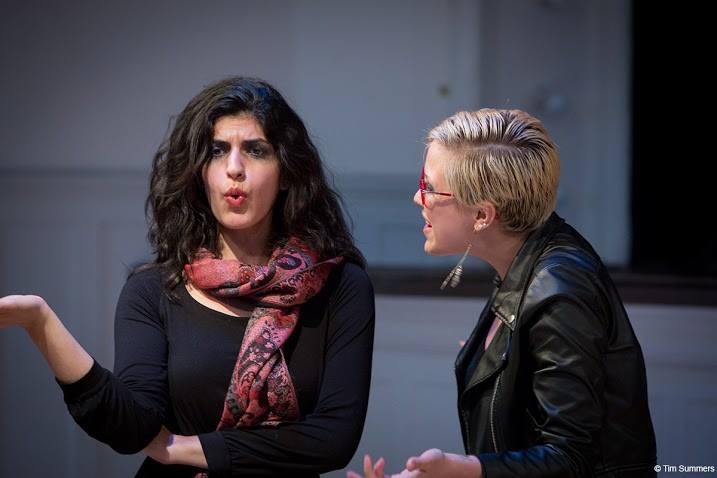 In a light-filled classroom in Hutchinson Hall—home to the University of Washington School of Drama—three actors move about with the airs of art patrons, talking about a new exhibition at such-and-such gallery. One woman is haughty and disdainful, scrutinizing the works and dismissing them as narcissistic. A man is in complete disagreement, arguing that “it’s illuminating, it’s dark, but at the same time raises vital questions about the world we’re living in.” Another woman placates both of them, agreeing with various points of the opposing gallery goers.

They’re at a rehearsal for Attempts on Her Life, a theatre piece based on the play by Martin Crimp, opening this weekend at the University Heights Center. Based on their ease onstage, the company seems to have been working together for years. Agreements about scene decisions are quick, without a lot of back-and-forth or pushing back, and every once in a while during a scene break someone finishes another person’s sentence. But under the helm of director and production manager Bobbin Ramsey—who recently became the newest company member at Washington Ensemble Theatre—they’ve only been a company since February. Taking the name The Horse in Motion, the ensemble makes its debut with an experimental work with zero traditional theatre elements, a choice that fits with the company’s mission to “engage the audience in new experiences that expand the traditional conception of theatre.”

“The script is unique in the sense that it has no characters, no settings and no real chronological plot,” Ramsey explains. “It simply contains a lot of text, and a new speaker is delineated by a dash before the line. The script is an open book for the artists to decide how they want to tell the story, how many characters there are, where in the world they are and everything in between.”

Based around an unseen character name Anne, the play consists of 17 standalone vignettes scattered around multiple floors of the University Heights performance space. The audience will experience a guided tour through the play, starting at a party Anne is throwing. When she doesn’t appear, three other hosts lead the audience through different scenes that explore topics like politics, terrorism, artistic choices, violence, sex and entertainment—a free-form, voyeuristic journey.

Many of the Horse in Motion’s members were culled from Ramsey’s alma mater, the University of Washington Drama School. Starting out with Ramsey, Michael Hanley and Mary Hubert (two of the ensemble members and former classmates), the company has grown to 25 people including lighting, scene and prop designers. They all have day jobs but get together twice a week for rehearsals, rotating between ACT Theater and Hutchinson Hall. Last May, before the company was formed, Hanley and Hubert brought the script to Ramsey to direct the play. At the time they didn’t have any concrete ideas or concepts but were drawn to the abstract nature of the text, “a playground for young artists right out of college,” the director notes. It was a challenge everyone was willing to take.

“It’s amazing how much things are still changing and falling in place,” Ramsey says from her front row seat in a section of desks.

The scene pauses and the group talks about major changes, like shifting relationship dynamics between characters. At one point someone suggests trying a scene by having two characters who hated each other suddenly involved in a romantic relationship. Ramsey interrupts often, asking the actors if they’ve ever thought about interacting with the audience or what the intent is behind a certain line. The nature of the play leaves these kinds of decisions wide open for the actors or director, reflecting not only the nature of the character but also the way the audience experiences the show.

“By the end of the play you begin to realize that it’s not really about Anne,” Ramsey says. “Anne is simply the vehicle or the catalyst for the characters in the scenes to truly identify themselves. Anne is representative of the rest of the world, of anybody who is considered an ‘other’ or ‘enemy’ or ‘foreigner’ to the speaker…I think there is definitely a sort of mystery to play as you try to figure out ‘Who is Anne?'” but in the end it is really more of an experience and examination of self-identification, the process of othering and what it means to have a community.”

Attempts on Her Life runs through April 27. Tickets here.

Above Image: Shaudi Vahdat and Mary Hubert in ‘Attempts on Her Life.’ Photo by Tim Summers.