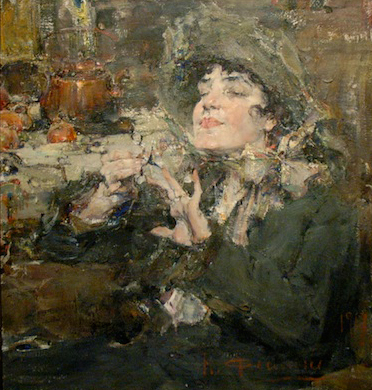 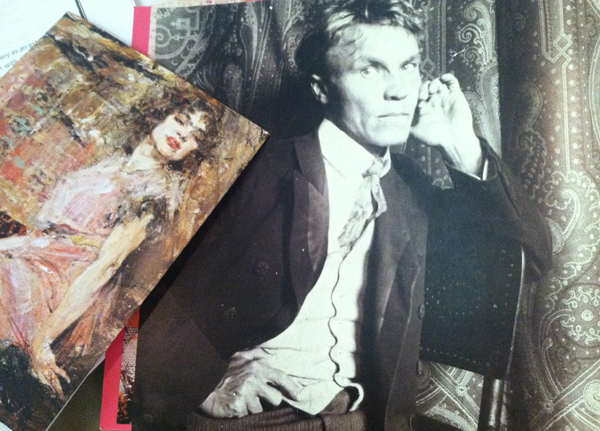 Last weekend I spent two full days at Frye Art Museum. I was assisting a workshop on writing about art. The other teacher was a poet who works extensively with Visual Thinking Strategies, an educational tool to help people verbalize what they see in a work of art. The VTS process is conversational and literally starts out by positing the elementary question, “What’s going on in this picture?” Sounds almost too simple. I wasn’t exactly skeptical of the process going into it, but I wasn’t expecting to be impressed with the efficacy of the process. During the first VTS session in front of Fechin’s Friends—a painting of a Native American adolescent with a dog in his or her lap—a group of about fifteen people began discussing what they saw. Before I knew it, half an hour had passed. The group hadn’t paused their discussion the whole time and had discovered nuances I never would’ve seen on my own. 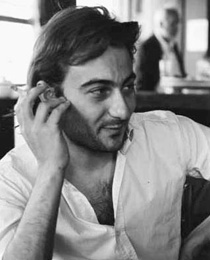 It reminded me of something Tom Morton (London-based curator and contributing editor to frieze) wrote for a 2009 conference on judgment and art criticism (a conference at which, coincidentally, Frye Art Museum director Jo-Anne Birnie Danzker also spoke). He starts his lecture by discussing art critic Stuart Morgan’s claim that the myth which relates best to the critic’s task is that of Cupid and Psyche. The myth is one about curiosity, pursuit, identification. Psyche cannot stand not knowing the precise nature of the object of her affection. Unfortunately, when she discovers the divine identity of her lover, the consequences are disastrous.

Morgan claims that the relationship between the critic and the Cupid and Psyche myth is not that of a irreversible disaster brought about by “total identification,” but rather one that describes the thrill of the chase experienced while pursuing an understanding (a recognition) of a work of art.

This recognition is akin to epiphany: (to quote Morton) “a sudden awareness of a pattern that was only previously intuited, a flash of similarity between what is inside and out, between self and other, or of mental and physical distances brought about by the experience of loving, or at least of attraction. What is important for Morgan is not the pinning of the butterfly to the board, but the wheeling, net-in-hand pursuit of it over the meadow. What is important is not judgment, (“to be judgmental,” [Morgan] writes, “is only finally the case”) but the intimacy that precedes it. Criticism is, it seems to me, an endeavored return to a set of intimacies: between the writer and the work, the writer and the artist, the writer and the reader, and the writer and him or herself. To write even a short piece of criticism, a review, say, of some 750 words, is to spend a considerable stretch of time thinking about a body of work. When was the last occasion, I wonder, anyone here honestly sat for hours or days in silence, contemplating their beloved?”

This is the secret pleasure of the art critic: a forced retreat with an object or body of work and the eventual intimacy that results. The critic, faced with the task of knowing an object well enough to speak of it, must become, to some extent, its lover.

Although the Nicolai Fechin show at the Frye is an unequivocal stunner, I still haven’t written more than the briefest reviews of it. Spending two days wandering the chambers of the museum, I had that luxury of contemplating Fechin’s work, if not for days in silence, at least for hours. I did fall for one painting in particular, the weird Manicure Lady (Portrait of Mademoiselle Girmond). It was painted in 1917. It shows a woman painting her nails. Even though it’s not the most wonderful painting in the world, it captures Fechin’s essential energy. Did you go to the exhibit and did you see it? Do you remember it? What if I make you never forget this painting? Can I, through a clumsy alchemy of turning looking into text, make you see Mademoiselle Girmond over and over? I am going to try. The effort won’t be exhaustive, but it will be a start.

A BRIEF NOTE ON FECHIN’S PHYSICALITY
It must be mentioned: Fechin himself was kind of a babe. Flipping through the Frye’s Fechin catalogue, there’s a black and white photo of him a few pages in. The portrait shows him leaning against a chair, but he’s not relaxed. He looks caged, nervous. A dark, unbuttoned overcoat is pulled open, revealing a cream-colored vest and silk tie loosely knotted around a starched collar. His lips are slightly pursed, his right hand half-clenched, veins sensuously bulging. Behind him there’s a tapestry swirling with floral patterns and heavily ornamental, interleaving geometries. Fechin is the incarnation of romantic Russian stereotype: half-feral, ferocious, eternally childlike. A real enfant sauvage. If the Frye is full of beautiful portraits of people whose effervescent garments barely contain the frames of savage beasts, it’s because, perhaps, Fechin was painting himself into every subject he ever met.

But now: on to the manicurist. 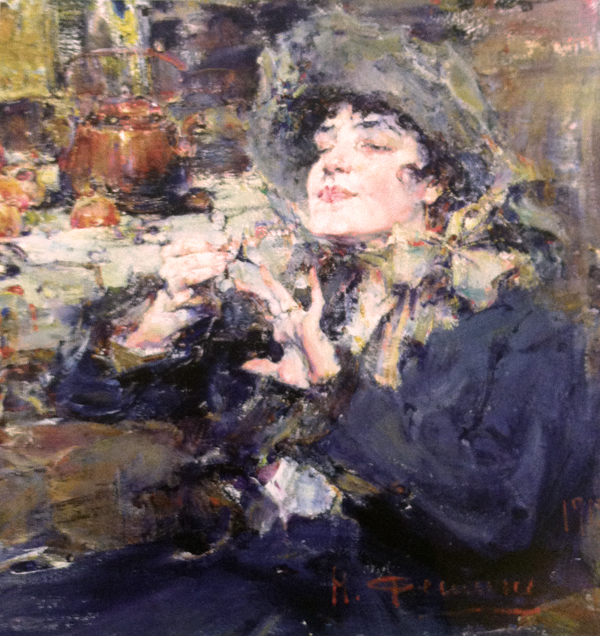 Manicure Lady (Portrait of Mademoiselle Girmond): first sight (scotoma)
If I stare long enough at Fechin’s paintings, I actually make myself dizzy. I see blind spots made of color. The more I try, the more I can’t locate actual substance, but only tenuous suggestions of things. The colors Fechin paints are like light refracting off iridescent paper that scintillates in the sun: blinding, prismatic flashes, alternating with black spots. It’s violent. One eventually fixates on the bow tied snugly under Girmond’s chin. Carved from a solid block of opal, it quivers. (It may or may not actually exist.) It’s embedded with sapphire slivers; also a smear of sea foam. The navy overcoat is bluntly nonopalescent, utilitarian, smudged with muddy brown strokes. The palms of Girmond’s hands are swollen lavender lumps. The skin is stretched thin, barely concealing the flayed musculature of knots underneath. There is also the garish red slash of a signature in the lower right hand corner, interrupting the navy of her jacket.

Manicure Lady (Portrait of Mademoiselle Girmond): consumptive
Her cheeks are flushed. I can never say too much about the way Fechin paints rosy cheeks, those tubercular pink blossoms on a bleach-white face. These are faded faces shielded too long from the sun. Fechin was also a tubercular. He developed TB while living in New York, after he and his small family fled Russia during the revolution. Susan Sontag wrote about TB in Illness as Metaphor. The metaphor—the fantasy—of TB is one of inward burning, of a person with heightened sensitivity, whose passion is all-consuming and insatiable—literally consumptive, whose final throes were violent, even sexual. Fechin had always been consumed. Even as a child, he nearly died of meningitis, his brain inflamed with blinding heat. His body could barely contain him. When Fechin fell ill in New York—ten years after he painted Manicure Lady—his physician told him to go west to a drier climate. He did.

Fechin didn’t die of consumption. Rather, he lived another twenty-eight years. His lungs dried out in the desert near Taos, where he moved with his wife and daughter. He loved painting portraits of the indigenous people there, whose clothing and culture inspired him. Taos reminded him, romantically, of Siberia. As soon as he arrived, he worked with gusto remodeling a two-story adobe house, carving out Russian-style doors and windows, carving his own furniture to fill the home. But five years later, he divorced his wife, Alexandra Belkovitch, and left her the adobe house. (She lived in it the rest of her life, another fifty years.) Fechin took his young daughter back to New York. After the daughter grew up and married, he continued to travel the continents. He kept roaming, his mind inflamed with vision, the world like a unrolling tapestry, shimmering with silver and opal threads and black spots.

The essential thing in woman that excited him was the sight of her beautiful hands. L. was far more impressed when he touched a beautiful female hand than he would have been had he seen the woman in a state of complete nudity. The extent of L.’s preference for beautiful female hands is shown by the following incident:

L. knew a beautiful young lady possessed of every charm, but her hands were quite large and not beautifully formed, and often they were not as clean as L. wished them to be. For this reason it was not only impossible for L. to conceive a deeper interest in the lady, but he was not able to even touch her. L. believed that there was nothing more disgusting to him than dirty fingernails; this alone would make it impossible for him to touch a woman who in all other respects was most beautiful….[A lengthy, explicit description of patient’s sexual predilections follows.]

Treatment of the patient’s perversion was not possible.

Manicure Lady (Portrait of Mademoiselle Girmond): corpse
After time, the thing that remains in the coffin, in the grave:

In fact, they say the nails still grow for a while after the body has died. (But it’s a myth; the flesh merely dries up and, withering, pulls back from the nail: an optical illusion.)

(Put another way: that zinc-white spot of light reflected on the tip of her button nose, along with her immortal gesture effortlessly frozen, is set in the amber of eternity. Belkovitch died in 1983, the same year, coincidentally, Michael Jackson invented the Moonwalk.)

Manicure Lady (Portrait of Mademoiselle Girmond): postscript
As she bared her teeth, Fechin poured a glass of water and took a drink.

Why on earth would he paint her painting her nails? It will make a good picture. She holds the pose for an hour. Her hands tremble. She laughs. Her cupid’s bow lips tinted just so, pursed, just after a kiss, but not so much of a kiss to displace the perfectly-drawn color. The manicurist is an artist too. “Let me have some of your paints,” she said to Fechin. She tips the talons with zinc, she pancakes her face with lead, she bubbles up laughter, the kettle screams. An orange goes rolling off the stovetop and crushes in a pungent spray at her foot. If the tips of her shoes smell like citrus, this is why.

Thursday hit list: Roq La Rue presents the prolific, fairy tale paintings of Stacey Rozich. This show promises a “deeper exploration of social political themes.” This will be Roq La Rue’s debut in the new Pioneer Square location (532 1st Ave S, near King St). It will be the place to be.

Gust Burns at Gallery4Culture. This thinky, sound installation-centric show could be hit or miss, but I’m hoping for a hit. Burns is a composer and pianist who focuses on improvisation. He edits the online music journal Eulachon and was co-founder of experimental music space Gallery 1412, among a long list of other accomplishments.