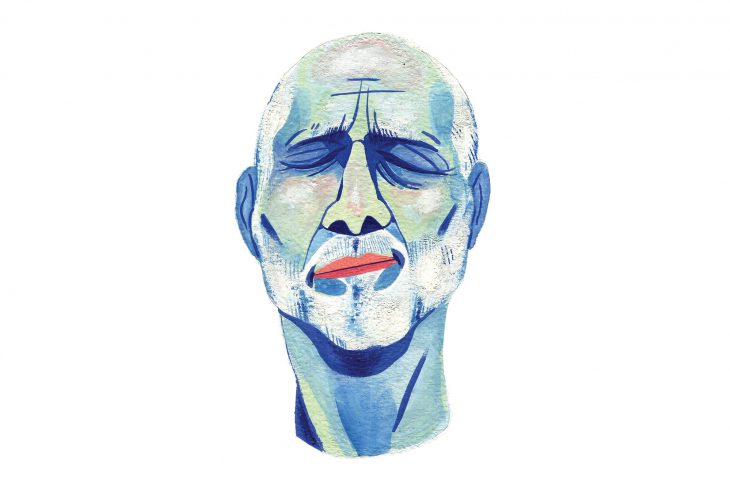 A world premiere from the Pulitzer-winning composer

John Luther Adams tells me I’ve reached him at an “undisclosed desert location,” and during the course of our hour-long phone conversation the sound of thunder rumbles from his end of the line. The scenario couldn’t be more on-brand for the composer who’s described the idea behind his work as “ecological listening,” his 40-some years of modern classical music inspired by and performed in the planet’s most dramatic natural settings.

This month the Seattle Symphony Orchestra presents the world premiere of Adams’ latest opus, Become Desert. The piece, which was commissioned by SSO, closes Adams’ three-part series of dramatic, ambient works that began with Become Ocean in 2013 and continued later that year with Become River. He’ll be present on opening night but he feels a bit ambivalent about it.

You may be the only person to win a Grammy and a Pulitzer in the same year [for Become Ocean in 2014]. How has your life changed since the accolades started coming?
Fortunately, I just turned 64 so I was old enough to know better. The love and attention is great, but it hasn’t changed who I am or what I do in any way. I guess the best part is that it allows me to do whatever I want, which is what I’ve always done anyway, except now people will answer my phone calls.

You have more clout.
I don’t know. One reason I’m hiding out in the desert is the same reason I hid out on the tundra, the boreal forest, all those years. My work comes from solitude. It’s almost as though I have to be two different people or have two different lives: the introspective work of composing, and then being out in the world doing whatever I can do to help people who want to bring it to life do their work.

This will be the first time Become Desert is played in full before an audience.
What a thrill it is! To work on something like this for years and then finally hear it in the air. In time. In space. It’s a very heavy experience, you know.

I generally do not enjoy performances of my own music, because I feel completely useless. [Laughs] I can only sit there with my cold, clammy hands and worry about what’s gonna go wrong.

What is that special thing?
It’s a kind of openness. This is a world-class symphony orchestra that is not tied to the traditional orthodoxies of world-class symphony orchestras. They’re willing to try things, to take chances. The audience there in Seattle is the same way—they’re sophisticated, they’re open-eared. There will be people who come to hear the new piece and maybe they’ll like it or they won’t know what to make of it. But I feel that Seattle is the best possible place to launch this piece. It will be received in the spirit in which it’s offered.

Classical music is not in great shape around the world. Orchestras are folding left and right with notable exceptions; there are some orchestras around the world doing terrific things, but it’s a difficult time for symphony orchestras. And Seattle is thriving in these difficult times because there’s creative leadership. What’s the [Symphony’s] motto? Maybe it’s still “Listen boldly.” That’s what my life’s work is about. And I think that kind of attitude is attracting a more diverse audience, a younger audience, because traditionally the audience for symphony orchestras is my age or older. And in Seattle young people are coming to these concerts getting excited about the music. It’s a beautiful thing. I love this orchestra.

Perhaps the Pacific Northwest landscape has something to do with people’s openness to your music. Seattle is hemmed in by mountains and volcanoes and the Sound, and it’s very much subject to the forces of the landscape and the climate, so people here are inherently influenced by the landscape. And they’re open to others who are too.
That’s one of the things my life’s work is all about. I’m a 40-year Alaskan. Alaska is the Pacific Northwest on steroids. Alaska has several great community orchestras, but there’s not the population base, the pool of accomplished musicians you have in Seattle. It’s just not possible to have an orchestra of that caliber up north. But what you’re saying about the attitude is absolutely true. That served me well all my years in Alaska. The audiences there, like in Seattle, are willing to take a chance, to expand themselves and hear something they haven’t heard before and come to terms with it. I can’t tell you how important that was to me as a young composer. I didn’t go to graduate school; I went to Alaska.

The title Become Ocean is a direct reference to a line by John Cage. Is Become Desert similarly specific in its origin or is it more of a poetic phrase?
Become Desert completes a trilogy of orchestral works that I didn’t set out to write. I thought Become Ocean was gonna be one of a kind. But it turns out that there’s Become River and now Become Desert. And one thing that all these works have in common is that space is a fundamental compositional element. I’m not speaking just of poetic space or metaphorical space, I’m talking about physical, acoustic, volumetric space. The space in which the ensemble plays, the space in which the music is heard. That’s space and place, which as you alluded to earlier, have been lifelong obsessions for me. In this trilogy, Become Ocean, Become River, Become Desert, I’ve been working with that [obsession] in a new way. Become Ocean is a score for a full symphony orchestra, a large orchestra, but deployed as three different ensembles, and those ensembles should be separated as widely as possible in the performance space. Each group has its own instrumental, harmonic coloration, and each ensemble moves through the piece in its own independent tempo.

The same is true with Become Desert, only more so. The new piece encompasses an even larger musical space and physical space. There are five different ensembles moving at five different tempos and stationed all around the audience.

Wait—you mean the musicians are in the audience?
For decades now, one of the most fundamental questions I ask myself when I begin a new piece is “What’s the instrumentation?” But with Become Desert, that became two questions: What are the instruments? And where are they located? And that was the primary, initial compositional decision for the piece. I pondered the floor plan if you will, the physical deployment of the instrumental and vocal choirs around the performance space for weeks before I decided what and where they would be. Only once I arrived at that layout did I begin to hear the sonic space in my mind and only then was I ready to begin composing the score.

So what does that actually look like?
The string players are dispersed all over the stage. They’re not in sections as they usually are. And interspersed among them are four harps and four percussionists. The stage is filled with strings, harps and percussion. Then the other four choirs are elevated. I don’t have the floor plan for Benaroya right in front of me, and I love that hall, it was very much in my mind in composing this piece—that and Disney [Concert Hall] in LA were the halls I had in mind. The strings, harps, percussion are onstage, then upstage is elevated as high as possible, like in the organ loft are a choir of 16 woodwinds and one percussionist. Then in another balcony elevated on one side of the house is a choir of eight French horns and a percussionist playing chimes, then four trumpets and four trombones with one percussionist playing chimes. And at the back of the house, elevated, is a choir of singers playing hand bells. So it’s a huge sonic space.

Wow.
It’s not a loud piece but it’s a big piece. It’s a funny thing, you might wonder, why is this desert space even larger than Become Ocean, right? Laughs. I think it’s because I’m a landlubber, a desert rat, a tundra guy. For me in Become Ocean where we’re out on the water, maybe surfing or on a boat, we’re riding the waves and they rise and fall or threaten to pull us under or loom over. But we’re on the waves. In Become Desert, we’re swimming. Not in water, of course, but in light. Because as the great Mexican poet Octavio Paz says of the desert, “That which is not stone is light.” And Paz goes on in the same poem to say, “Close your eyes and listen to the singing of the light.” That image, the light singing, made me feel this music had to include human voices. The chorus, the lyric is a single word, luz, the Spanish word for light.

What you’re describing reminds me of James Turrell and his work with space and light, endlessly rich but easily overlooked mediums.
One of my pieces, “The Light Within,” was inspired by one of Turrell’s Sky Spaces, which is now in PS 1 in New York City. I’m honored that Turrell has used that piece around the world to inaugurate new Sky Spaces, to consecrate the house, so to speak.

His Ronen Crater project is especially incredible.
It’s madness! It’s pathological, it’s obsessive! And I identify with it.

During an address at the Banff Centre for Arts & Creativity a few years ago, you said that art is more important than politics. I agree with you though I have a hard time articulating why. Do you still feel that way?
Politics matter less than ever. We’re living in dangerous, dark times, and it’s clear that politicians are not going to provide the answer. Our so-called leaders don’t lead, they follow. In the present day, there are no creative thinkers on the public stage in politics. Our pants are on fire, our hair is on fire, our survival as a species is threatened. The only way out of the hole we keep digging deeper for ourselves and so many other species is creative thinking. Politics does not traffic in creative thought. That is the domain of art and science. And we need new ideas and we need them fast.