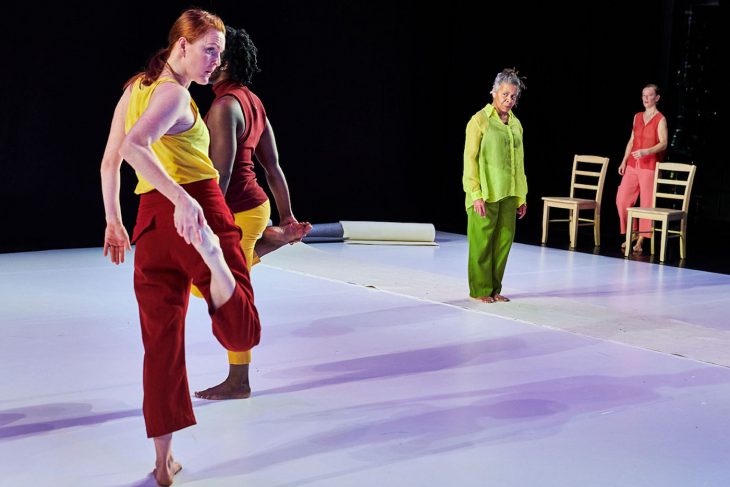 When David Foster Wallace communicates a character, it’s not through describing them outright, but through choosing and arranging words in a way that brings you directly into that character’s psyche—the construction of language itself creates a meta-story inside the plot. Wallace’s potent use of syntax is the impetus for choreographer Bebe Miller’s newest dance work, In a Rhythm, which toured to On the Boards this past weekend. We know this because Miller begins on stage with her dancers, speaking to the audience about her inspiration for the piece, moving effortlessly between memoir and theory, recalling her journey to discover how dance might communicate in that same way—the syntax of movement.

Miller is a masterful public speaker, clear and engaging, yet as warm and intimate as a conversation over coffee. It’s hard to look away from her toward the six dancers who begin to move around her. They move with that casual grace of dancers influenced by the Judson Church Theater lineage, each knee lift and arm swing done at maximum efficiency, only using the exact musculature required and no more. At first, I feel a lot of pressure to perceive the heady concepts Miller discusses. Can I see the dance syntax? Or will I get left in the intellectual dust? What is the meaning, connection and understanding inside these strings of abstract gesture?

The first breakthrough comes when Trebien Pollard gently shoves a chair beneath an unsuspecting Sarah Gamblin, whose knees buckle and she plops down with a laugh as natural as anything. It is not the what that is important, but the how. The way the performers do the movement is remarkable. Though clearly choreographed, they move as if discovering these gestures for the first time, as if each decision were of the moment rather than rote memory. Just as with Wallace’s writing, we’re brought into the dancers’ characters not through the story, but the way the story is told, or in this case, danced.

The choreography turns from suspended float to jarring hop to lilting crawl, each moment imbued with detail, accented by a quick shake of the foot or a subtle change in focus. Gamblin’s wild spontaneous energy contrasts with Bronwen MacArthur’s easy malleability and Pollard’s loping, soaring calm. Angie Hauser’s open playfulness differs from Michelle Boulé’s private intensity. Christal Brown is most distinct stylistically, spunky with more push to her movement.

Miller’s spoken interludes shift to Toni Morrison’s writing, and then to the subject of race. Miller and Hauser recreate part of a Morrison interview with Charlie Rose in which she rebukes him for asking if she will write a novel not centered on race, as if writing about race is something only Black writers do.

The interview gives way to a duet between Brown and Pollard on two side-by-side chairs, casually intertwining limbs like they’re sharing too small a space, but at ease, like they’re completely used to it. They slouch, dive off the chair, and then return, fitting into one another, each going about their separate business in a confined world. Their rhythmic movements play with the hip-hop beats of Nelly’s “Country Grammar” cutting in and out. Along with Miller, Brown and Pollard are Black. The shifting context highlights how the cultural idea of their blackness is amplified through the music. Miller acknowledges race where many choreographers would ignore it, as if pretending it isn’t there means the piece isn’t about race. In many cases, this means the choreographer is simply making a piece about whiteness without realizing it. In another spoken interlude, Miller mentions last year’s controversy over Dana Schutz’s painting of Emmett Till in the Whitney Biennial. “I can still call up Emmett Till’s face anytime I wish to,” Miller says. “Everything is here, what’s left is choice.”

As we get to know these dancers through their interpretation of the movement,  so we get to know Miller through her choices. Her arrangements of the pieces, the syntax of the overarching composition, deliver us into her psyche—her intellectual curiosity, her interest in the nature of humanity, her prying into cultural identity.

Wallace once said, “A big part of serious fiction’s purpose is to give the reader, who like all of us is sort of marooned in her own skull, to give her imaginative access to other selves.” These strings of abstract movement, at first a mystery, slowly envelop us in their complexity. Through watching and listening, Miller teaches us to become literate in the language of other people’s choices and other people’s bodies. In a Rhythm is the profound artistic experience of peering outside of one’s self.