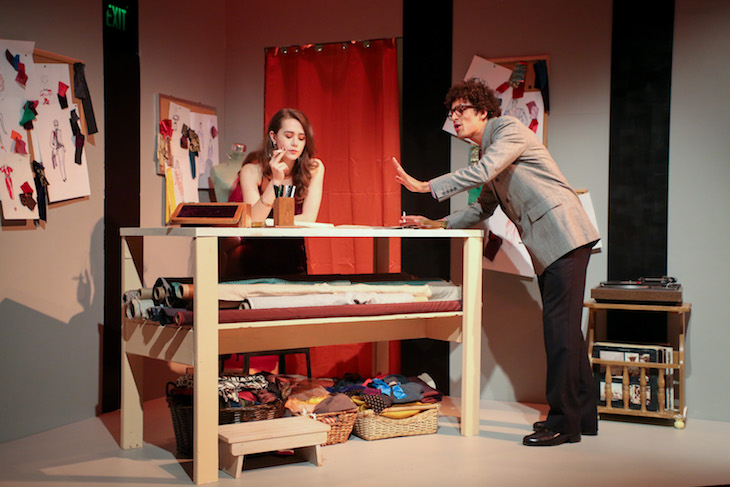 Of all the stats studded throughout Michael Hobbes’ excellently reported feature story “Everything You Know about Obesity is Wrong,” published last week on slick Huffington Post offshoot Highline, this one was as heartbreaking as it was jaw-dropping: “Nearly half of 3- to 6-year-old girls say they worry about being fat.”

Twenty-four hours after reading that, this line in Sheila Callaghan’s play Everything You Touch, directed with pinpoint comedic and poignant precision by Maggie Rogers for Washington Ensemble Theatre, socked me in the face: “Do you know what the old lady said to me the other day after you got on the school bus? My, she’s well-fed, isn’t she? Humiliating.”

The phrase, as remembered by our central character Jess (Kiki Abba), was said to her by her mother, but in this case it’s repeated by a flock of nude-unitard-clad women who serve as both models, mother and set dressing in this play about beauty, trauma, self-perception, what we inherit and what we pass on.

Jess, a New York coder, has built her identity inside a cocoon of slovenliness and self-destructive tendencies ranging from casual sex to eating Chipotle with her hilarious, doting friend Lewis (Mario Orallo-Molinaro). Her mother, whom Jess hasn’t seen since she was 18 years old, is dying back home in Little Rock and, in another act of self-flagellation, Jess can’t decide whether or not to go see her.

Her storyline intercuts with that of aspiring, tortured fashion designer Victor (Kevin Kelly) and his muse Esme (Cheyenne Barton), building a brand together in the mid-1970s East Village. In their beautiful, blasé world, suicide is banal, poverty is inspiring and “Dillard’s, on sale” is the most offensive phrase you can say.

Underpinning everything is the fear of being forgotten, of being ordinary, of being “everything you touch, but nothing that you notice” as a sing-song phrase repeated identically between these generations of women goes.

Jess, with the help of an anonymous, possibly imaginary male muse, becomes the fashionable woman she wants her mother to think she is. Victor, inspired by Arkansas bumpkin Louella (Dayana Vice) who won a contest to meet a fashion designer in the big city, moves toward creating fashion people actually want to wear. She wants to be “someone worth looking at, worth loving.” He wants to be remembered, “to become immortal.”

Time isn’t an entirely fixed concept in Everything You Touch; eras meld, Jess addresses the audience directly in an untethered-from-chronology way. Tristan Roberson’s excellent scenic and lighting design aids this fluidity nicely; flexible and clever, shifting moods on a dime with washes of warmth or cool neon. Roberson’s design works in concert with Kaitlin McCarthy’s detailed choreography, the articulating force behind the bevy of models-cum-set pieces, beautiful but utilitarian—their beauty is expected, required—though some of the performers are more adept than others at model-like neutrality.

Hats off, of course, to costume designer Jennifer Oaster, whose work animates both the visual life of the characters and the fashion lines Victor and Esme dream up. The play opens with the stomp-stomp-stomping of models, clad in swinging velvet and soft furs, walking the runway center stage. The dresses are beautiful, but when Esme quotes a review calling them “architectural” (which Victor translates as “unwearable”), it doesn’t seem quite accurate—a minor detail, but one that makes Victor’s shift into more wearable, mainstream designs (read: jumpsuits I would wear immediately) later in the show less noticeable.

Abba anchors the play with her unmoored portrayal of Jess, all slumped shoulders and sad-clownish one-liners, her deflated pique offset by Orallo-Molinaro’s upbeat sincerity. Barton brings internal coals to Esme’s visible rage, you can see the frustration, potential and hope roiling beneath her surface bitchiness, tamped by a society that’s taught her to value only her looks.

Everyone falters a bit on the play’s more lyrical, abstract monologues, but it’s to Rogers’ credit that this production never gets navel-gazey or self-consciously bizarre—she never lays it on too thick. The play’s unique technical requirements are expertly balanced to enhance and never distract from the emotional heartstrings running clearly throughout the play.

Callaghan isn’t tapping into the overtly topical, she’s writing about being an American woman and the uphill climb that is escaping a cultural miasma that makes us hate ourselves. “Have fun never having a man want to fuck you,” Jess’s mother spits at her, in a scene from her 18th birthday. Raising women to consider their value in terms of who wants to fuck them is a big part of how we get rape culture, the you should be flattered reaction to catcalling, and these ideas are so deeply ingrained in American society that breaking the generational cycle that perpetuates them seems almost impossible.

“How badly do you want to eviscerate yourself?” Jess’s muse asks her. Very badly, is her answer. Acknowledging her past, both personal and societal, understanding the pain motivating her mother’s abuse, is the first step toward letting that go.