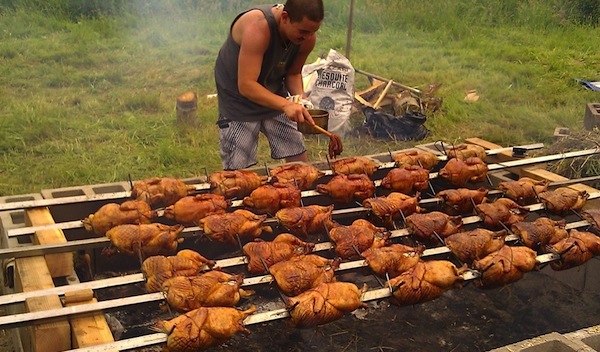 It was a stunning day for flesh and arson.

Burning Beast, in its fifth meat-soaked year, is a food festival fundraiser where local culinary crush Tamara Murphy (Terra Plata, Elliot Bay Café) rounds up some of Seattle’s best chefs, assigns each one a beast to cook, and everyone gathers to play with fire in a field. Proceeds from Burning Beast support Smoke Farm, where the event is held every year. (Smoke Farm is the venue and program center for the Rubicon Foundation, a nonprofit that supports artists, creative processes and community engagement through hosting artists in residence, retreats and various events through out the year.)

Smoke Farm is nestled in 365 acres of idyllic, raw Northwest beauty, surrounded by trees and flanked by the craggy shores of the Stillaguamish River. This year, 400 foodies and Smoke Farm supporters brought their appetites and party pants as chefs flaunted their culinary swagger so seductively, the sublime aromas emanating from snazzy fire pits swayed more than one vegetarian to the carnivorous side. 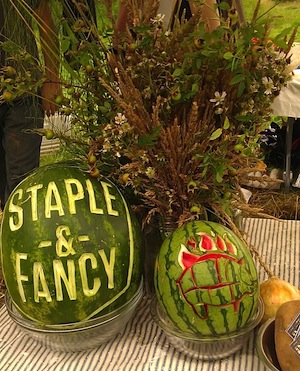 One might assume tasty veggie options might be the redheaded stepchild at this event, but the chefs whipped up some amazing, non-meaty sides—Staple and Fancy’s swoon-worthy gnocchetti salad!—and Mulleady’s Pub served ratatouille and a refreshing arugula salad to round out the fleshy fare.

Burning Beast gave folks a voyeuristic peek into the personalities that fill their favorite kitchens—some teams were raucous and loose with the chitchat; other chefs ran their stations with Zen focus and calm. But however varied in style, it was clear each chef is a master in tending to the swarm of hungry locals that line their brick and mortar doorways like baby birds.

Surprise best beast of the festival: goat. Seattle Culinary Academy and Quillisascut Farm served my favorite dish—goat kibbeh with harissa and tzatziki, which is just fancy talk for a damn good meatball smothered in magical sauces and cradled between the angel wings of a perfect pita. Another favorite was Il Corvo’s Sardinian-style roasted goat, lovingly tended to by chef Mike Easton who braised the meat with drippings from a flaming piece of lardo, cured duck fat and rosemary, and served it over glorious chickpea flat bread.

After the feast, fire dancers initiated the ritual of burning the beast, a giant wooden antlered creature with impressively huge, flammable testicles. “Welcome to the Jungle” bled out over the smoke filled field as a crowd gathered to watch the beast go up in flames, its body parts dismantling one by one, until the lone standing haunch splintered off into the roaring blaze and the crowd hit the dance floor.

The event ran smooth, and the vibe was unpretentious and breezy—surprising given the steep $100 per ticket cost. But given the event is fundraiser, the price is comparable to other fundraising events and offers a unique alternative to the more traditional formal dinner/speech/auction format. Not to mention the value of having all-you-can-eat access to some of the areas most talented chefs all in one place. And if, like me, $100 is beyond your budget, the event organizers are gracious and generous with volunteers—over 50 of us made light work of tending the bar, assisting chefs, picking up trash and breaking down tables and chairs.

Next up at Smoke Farm is the LoFi Arts Festival, which will bring together local artistic talent under the foxy light of a full moon on Aug. 25.